The average household circuit uses a 15 amp breaker. When planning the electrical layout of the house, it is important to understand what your circuit can handle and what it was designed to support.

With a little math, it is easy to figure out the upper limits of your circuit, so let’s explore the process and figure out how many ceiling fans can be supported.

On average, a 15 A breaker will support 14-26 ceiling fans. This range is based on a 12 A current (breakers are rated higher than the allowable current), 120 V voltage (normal rating in a residence), and the average power usage of ceiling fans, which is 55-100 W.

Contents show table of contents
Can Multiple Ceiling Fans Be on the Same Circuit?
Determining Factors
Breakers Rated Higher Than the Circuit They Serve
Most Common Circuit Voltage Rating
Average Ceiling Fan Power Rating
Allowable Total Wattage for Circuit
Calculating How Many Fans Can Be Supported
Sources
Was this helpful?

Can Multiple Ceiling Fans Be on the Same Circuit?

Ceiling fans are actually appliances that pull very little energy. Even an old and less-efficient fan is not going to be the electrical device making your utility bill totals rise to unreasonable figures. 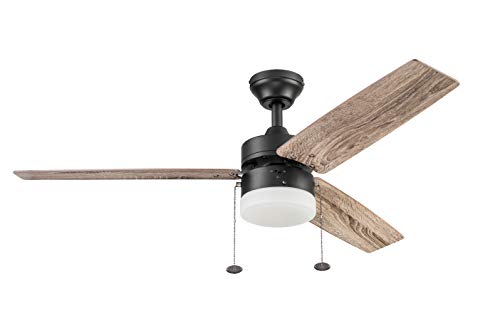 As such, ceiling fans do not need a dedicated circuit, and multiple fans or even fans and other devices can all be connected to the same circuit in a house with no disproportional risk to safety and function.

A couple of factors influence how many fans you can support.

In addition, ceiling fans with a high power rating (wattage) will use up much more of the available power than fans with a lower power rating. This means that you can have substantially more lower-power fans on the same circuit.

It is also important to consider other appliances. If they are on the same circuit, then less power will be available to run multiple fans. Therefore, you will need to include the power rating of other appliances linked to the circuit in the total calculation. We’ll get to the calculations in a moment, but first, you should know that breakers are rated higher than the circuits they serve.

Breakers Rated Higher Than the Circuit They Serve

Breakers are rated at 120%-125% of the circuit rating for both ease and safety purposes. If breakers were rated less than this, the circuit would unnecessarily trip too often. In addition, a safe amount of current would trip it.

On the other hand, if the breaker were rated higher, then the circuit would not trip when it needed to, which would be a hazard. This could cause an overload on your circuit and ultimately lead to an electrical fire.

The most common voltage rating in a residential dwelling is 120 V. Therefore, when calculating the available wattage, you should use 120 V.

It could be possible that your circuit has a different voltage rating, and if it does, this would likely be 240 V. However, in most American residences, 120 V is the standard voltage rating of a circuit.

The power rating of a fan depends both on the size of the fan and its power consumption. Typically, larger fans will consume more energy than smaller fans, but this is not always the case.

Most ceiling fans use an average of 55-100 W, and it is what we will be using in our calculations.

To find the total wattage (W) for your circuit, you need to multiply your current (I) by the voltage (V).

Calculating How Many Fans Can Be Supported

Using the average wattage of a ceiling fan (55-100 W) and the total allowable wattage that we calculated above (1440 W), about 14-26 ceiling fans could be supported by a 15 A breaker. However, this estimate assumes that no other appliances are on the circuit.

When calculating yourself, you can find the exact wattage of your fan on the box or in the online product information. In addition, you will need to subtract the power used by other appliances on the circuit.

If you are installing multiple ceiling fans in a room, you may want to read my article on how far apart they should be.