Being cost-efficient and relatively easy to handle makes ABS an appealing option for a dryer’s ductwork. If ABS were to meets the standards of the International Residential Code (IRC), it could be a potential alternative to metal ducts.

As with any large appliance with a heat source, safety is first and foremost. While very useful under different circumstances, ABS could prove to be a very dangerous alternative to metal ductwork.

Contents show table of contents
Is Static Build-up a Problem with ABS?
Can ABS Withstand Dryer Temperatures?
Dryer Ducting Must Be Metal
ABS Flame Spread Index Is Too High
ABS Cannot Be Used for Dryer Ducts
Sources
Was this helpful?

Is Static Build-up a Problem with ABS?

Acrylonitrile Butadiene Styrene, or ABS for short, is a special type of thermoplastic. 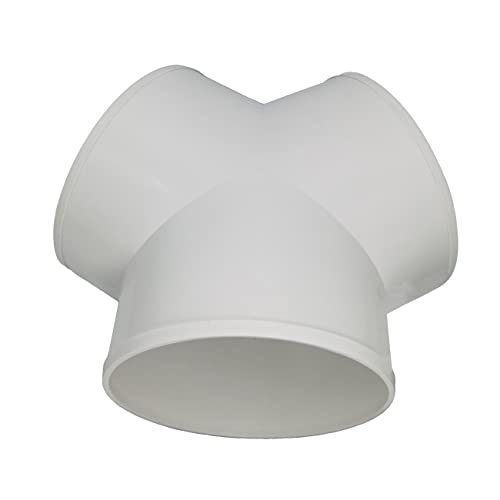 A big issue when assessing which materials are good for ducting dryers is how prone they are to static build-up.

Dryer ducts transport and collect lint, which is highly flammable. Add to this the heat of the exhausted dryer air and you have yourself a potentially dangerous set-up.

If the materials of the ducts generated static charge readily, then not only would lint collect much more easily, by the electric charge could create sparks and set the lint on fire.

ABS has low electrical conductivity. Oftentimes this material is also used as an electrical insulator and protects wires. With that being said, it’s unlikely that you’d see a static build-up problem using ABS.

PVC is another common plastic material used for plumbing and ventilation. However, PVC pipes allow for static build-up. This static build-up can be very dangerous as it can lead to fires from the ignition of the flammable dryer lint. As such, PVC is a prohibited dryer duct material.

While a plastic ABS duct could withstand the temperatures of most dryers, there’s still the potential for the plastic to melt in certain areas exposed to higher heat. Not only would this ruin the ductwork but also would lead to even more lint build-up in the dips and hollows created in the melting plastic.

Dryer Ducting Must Be Metal

In Section M1502.4.1, the IRC states that dryer ducts must be constructed of metal.

The IRC provides further details about the materials (smooth inner surface and a specific thickness), but even if ABS meets these requirements, the very fact that dryer ducts must be made from metal means that ABS is not an option.

The reason behind these regulations for a dryer’s duct is primarily for safety. Metal does not have the same static build-up issues as plastic. A smooth interior will also help to avoid the build-up of lint.

The thickness of the metal protects against the high temperatures of the dryer. While the minimum requirement is very thin, this still ensures that the integrity of the duct is maintained and the heat isn’t being transferred to areas outside the ductwork too much. Insulation can also assist with this.

Flame spread index (FSI) is used to measure the surface burning characteristics of building materials and indicates how well a fire will spread in or on a certain material. As such, FSI is a very important measurement used to ensure safety in buildings.

For dryers, which combine heat and flammable materials each time they are used, it is vital to adhere to the recommended FSI.

In Section M1601.1.1, the IRC states that duct systems will be constructed of materials with an FSI no greater than 200. ABS has a FSI that can range from 200 to 275, which is another basis on which it cannot be used as dryer duct material.

While many of the IRC’s requirements regarding a dryer’s ductwork are met by ABS ducts, they should not be used because not all the requirements are met.

Although you might be tempted to try it because ABS is so cost-effective, you have to remember that the rules are not just there to make your life difficult or even just to standardize aspects of construction for easy regulation.

The prohibition of dryer duct materials like ABS is based on safety.

If you needed just one more reason to avoid ABS dryer ducts, consider the fact that they are relatively flexible, which might become an issue when it comes to installing backdraft dampers. Backdraft dampers are both mandatory according to the code and vital to prevent heat loss through the dryer ducts and cold drafts coming through the dryer vents.