I have a South African friend who was very surprised to hear that most Americans have vented dryers. Her family and friends have only ever used ventless models and I cannot convince her that vented units have enough benefits to merit cutting holes in the house and running ducts.

South Africa isn’t the only nation in which ventless dryers are the norm. They are also preferred in Europe and the UK. With such a large portion of the world successfully tumble drying their clothes in these units, I was inspired to research the subject. My conclusion is that while vented dryers definitely have merit, going ventless is an excellent idea and a great choice for most domestic households.

Ventless dryers are a good option for most domestic households. The cons are far exceeded by the pros of eliminating the need to install and maintain ducts, which also trap lint, increasing the risk of fire. Ventless dryers can also be installed in small spaces or spaces with no outside access.

Unlike exhaust fans and kitchen range hoods that help to improve indoor air quality by removing warm, moist, and potentially contaminated air, dryers are stand-alone units. Exhaust fans and range hoods function to ventilate rooms. The function of a dryer is not ventilation, it is drying clothes.

In carrying out its function, a dryer can affect indoor air quality. But this puts it in the same category as a steam-producing shower or a boiling pot of soup as opposed to categorizing it with a bathroom fan or a range hood.

Look at it this way, if you are trying to ventilate a room, you don’t install a dryer to achieve this end.

Venting a dryer to the outside ensures that the exhaust from a dryer does not enter the room and put a strain on the actual ventilation system. If there was an alternative way to deal with the exhaust, that would be perfectly acceptable.

A ventless dryer achieves this alternative way by cooling the air, condensing the moisture out of the air, moving the water to a containment tray or drain hose, and then reusing the air for the next drying cycle.

The air is eventually released back into the room, but because it is now cool and moisture-free, it shouldn’t have a significant impact on the room’s indoor air quality.

The whole purpose and main advantage of ventless dryers is that they do not feature a vent. This means that you do not have to create a hole in your wall or ceiling and roof.

This makes ventless units an ideal dryer option for rooms that do not have easy outside access through a wall or the attic.

For instance, individuals who live in rentals and aren’t permitted to vent outside wouldn’t be able to install a vented dryer if the vents were not already in place. A ventless dryer is a perfect solution in this scenario because it does everything a vented unit does without having to exhaust air outdoors.

It’s also ideal for people who want to install a dryer in an enclosed space like the master closet.

Additionally, ventless units take up little room so, they are great for small apartments and houses with little space to spare.

Ventless dryers are a convenient option for people who do not have a dedicated laundry space since it doesn’t involve making permanent changes to the appearance of the room.

The absence of vents removes the need for duct maintenance and by extension, eliminates the risks of fires due to clogged dryer vents.

Clogged dryer vents and overflowing lint filters are a safety hazard. In fact, the National Fire Protection Association states that dryers were responsible for 92% of the 15,970 household fires between 2010-2014.

Both traditional and ventless dryers feature a lint filter that has to be cleaned after every cycle. However, conventional units also have a vent in which lint can build up; ventless dryers do not. Thus, vented dryers pose a higher fire risk as their vents can be clogged with lint if they aren’t cleaned periodically.

Due to their design and mode of operation, ventless dryers can increase the humidity in a room. Thankfully this can be avoided by installing the dryer in a well-ventilated room.

Additionally, all ventless dryers run on electricity, so there isn’t a risk of gas leaks. However, they do have higher voltages than gas dryers, which can be dangerous if used unwisely.

They Should Be Installed in a Well-Ventilated Room

The defining feature of ventless dryers is that they are designed to function without a duct. In a ventless unit, moisture is drawn out of the air through a heat exchanger and then the moisture is moved to a water tank that can be manually emptied or plumbed on with a drain hose.

The process of removing moisture from the dryer can increase the humidity in a room and by extension, promote the growth of mold and mildew.

The key to preventing humidity is to ensure that the room is properly ventilated. This can be something as minor as not closing the door between the laundry room and the rest of the house while the dryer is running.

Benefits of Ventless Dryers Over Other Dryers

Ventless dryers consume about 20%-50% less energy than traditional models. This is possible because of their mode of operation.

A vented unit draws in conditioned air from the room, heats the air, exhausts the heated air outdoors, and then draws in more air from the room. This causes the HVAC system to work extra hard to bring the room to your desired temperature, and this ultimately increases your energy consumption.

Ventless units extract moisture from the air through a heat exchanger and then the air is recycled and reused to dry your clothes, eliminating the need to constantly pull conditioned air from the room.

Additionally, ventless dryers run at a lower temperature. Thus, they do not use up as much power.

Easier to Install and Maintain

The absence of a vent gives you one less thing to worry about.

Ventless units only require an electric outlet to function. So, you’d only have to spend on installing an outlet.

Most electric dryers work with a 240v outlet. So, if you already have one in place, the only step required for your dryer to run is to connect it to the outlet.

Vented dryers also require an electric outlet. But in addition to the outlet, you also have to install a vent.

Installing a vent would demand extra cost if you are employing a technician. And if you decide to perform the installation yourself, setting up a vented unit is a lot more time-consuming.

Ductwork doesn’t just have to be installed, it also has to be cleaned and repaired. So, by eliminating the vents, you halve the maintenance requirements of your dryer.

One of the reasons vented dryers are more popular in America is that they dry clothes faster. However, the speed means that the dryer exposes your clothes to high temperatures, which are harmful to the fabric of your clothes.

Ventless dryers run at a lower temperature and as such, are gentler on fabrics. Vented dryers tend to over-dry fabrics but ventless units do not.

Although tumble dryers are known to shrink clothing twice as much as air drying, ventless dryers pose fewer risks to fabrics than their vented counterparts.

You can use the water collected in ventless dryers in a multitude of different ways. In so doing, you are helping to reduce water usage and living a greener lifestyle.

For more information, you can read my article on Ventless Dryer Pros and Cons.

There are two types of ventless dryers: condenser (amazon link) and heat pump dryers (amazon link). They are both similar in that they do not feature a vent. However, there are slight differences in their modes of operation.

A heat pump dryer features an extra heat exchanger that cools heated air before recycling it into the dryer. 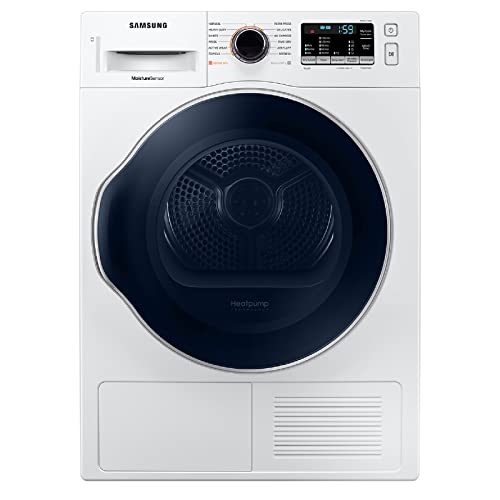 Condenser dryers do not cool heated air. Instead, the dry air is recycled into the drum after moisture is extracted from it.

Heat pump units are the most energy-efficient dryers models. But their positive features also make them the most expensive dryers in the market.

Both dryers feature a water tray, which has to be manually emptied after one or two loads. However, heat pump dryers provide an alternative method of draining the water for people who do not want to manually empty a water container.

Here are some of the differences between heat pump and condenser dryer units.