Bathroom fans are basically a requirement in any bathroom with a shower. Their ability to remove moisture efficiently keeps bathrooms looking new for years and wards off the dreaded mold that is so synonymous with damp spaces.

Most people vent their bathroom fans through the roof, but this is certainly not without its cons. Happily, it’s not the only option for homeowners looking to keep their roofs fully intact.

Bathroom fans can legally be vented through the side of the house, provided they are at least 3 ft away from property lines and gravity air intakes, 10 ft from mechanical air intakes, and it is the shortest ducting route.

Bathroom Fans Can Be Vented Through Walls

While bathroom fans are often installed in the ceiling of a bathroom, there are no laws or regulations stopping you from venting your fan directly through your bathroom walls.

You do, of course, need to have at least one exterior wall in your bathroom. Otherwise, you’d just be venting it into the next room.

Alternatively, if you are looking to install a bathroom fan in the ceiling and run the ductwork through the ceiling and crawl spaces and out the side wall, then you would not need an exterior wall in the bathroom, and such a configuration is also allowed.

Rules Regarding the Exit Vent Location

If you are looking at venting your bathroom fan through the wall, you do need to consider some of the regulations that are in place, especially regarding rules that apply to exit vent locations.

Section M1504.3 of the International Residential Code (IRC) specifies that:

“Exhaust openings shall terminate as follows:

The reason why your bathroom exhaust vent must be at least three feet away from your property line is to contain your “house waste” on your property.

If, say, your bathroom exhaust vented directly over the fence, then your neighbors are constrained as to what they can do with that part of their house or yard, which isn’t fair. Your exhaust can also end up damaging their house.

The three feet minimum distance from gravity air intakes is important to prevent the bathroom exhaust from simply coming back into the house and causing moisture and heat damage to other rooms and compromising the quality of the air therein—it’s a health risk.

The distance between bathroom exhausts and mechanical air intake openings, such as the air supply vent for a furnace or gas-heater appliance, is greater than what we have been discussing so far.

The increased distance (at least ten feet) is due to the fact that these intakes are actively pulling air into a system that requires the air to function properly and safely. If the air being pulled in is moist and hot, then it can create issues.

The exception is if the bathroom exhaust vent is located above the mechanical air intake. In such cases, you can return to the minimum three-feet rule.

Hot air rises, so when the bathroom exhaust leaves these vents, it’s automatically going to move away from the mechanical air intake.

Must Be Shortest Route

When you vent your bathroom fan, you will want to take the shortest route to the outside possible. This is because the shorter the path, the more efficiently the vent works.

When you have a longer vent path, the airflow in the vent will be negatively impacted. It raises the static pressure, which slows the air down. This is exacerbated by the increased number of joins and elbows, which also cause friction and reduce air speed.

Slow airflow means more time for cooling and condensation in the duct and it also means that the whole system is less efficient and less effective.

Should You Vent Through the Side of the House?

So, you can vent your bathroom fan through the side of the house. But should you?

Advantages of Venting Through a Wall

Disadvantages of Venting Through a Wall 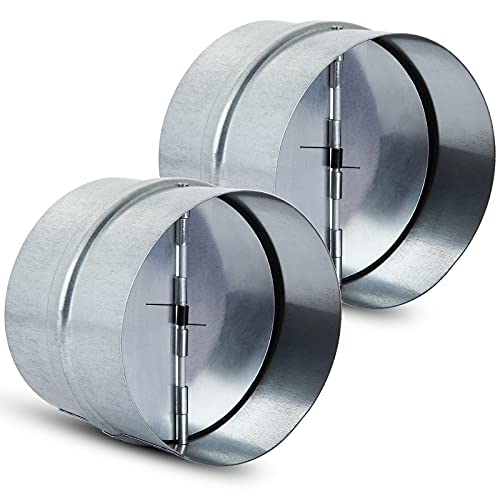