In the winter, a ceiling fan can aid an external heat source, like your wood burning heating system. But it is all dependent on how you use the ceiling fan.

The extent to which a ceiling fan can aid a wood-burning fireplace/stove is dependent on the fan’s direction of rotation, location, and speed. A ceiling fan can even heat a whole house in some circumstances.

Ceiling fans can evenly distribute heat from a wood burning unit. The clockwise direction should be used at medium to low speeds. The fan should be placed above the wood burning unit or in the center of the room. It is less effective for rooms with high ceilings.

The problem with a wood-burning stove or fireplace is that they are located in one position in the room.

Ceiling fans can help to solve this issue. They can help to circulate the air in a room, thereby distributing the heat from the wood-burning stove or fireplace more evenly. But only if the fan is spinning in the right direction.

The best ceiling fan direction during the winter would be clockwise; this is the winter mode of the fan. When a ceiling fan is rotating clockwise, the leading edge of the pitched blade is the lowest point of the pitch and the air is pulled up rather than forced down.

Cold air that has settled near the floor is pulled up by the fan, and the warmer air near the ceiling is displaced by this colder air. The warm air is then redistributed through the lower areas of the room where it can be felt more by the occupants.

Circulation is not only created by the ceiling fan, but also by the natural rising and falling of air according to temperature.

When dense, cool air is forced up, it will want to fall once again. The opposite is true for less dense, warm air.

So, the mechanical and natural air movement cycles create air circulation in the room so that the occupants can experience a more even temperature.

It is important to note that, just like when a ceiling fan is rotating counterclockwise (cooling summer mode), a ceiling fan does not change the temperature of the room in winter mode.

All it is doing is redistributing the temperature of the air to make it more even throughout the room; the overall air temperature remains unchanged.

To fully benefit from a ceiling fan in winter mode, you need to add a source of heat, like a wood burning stove or fireplace.

The clockwise rotation of a fan produces a much gentler flow of air than the counterclockwise rotation. If it moved with the same speed in winter mode, the warming benefits would be marred by the addition of wind chill.

However, this makes it difficult for winter mode to work well in rooms with high ceilings. The displaced warm air might not make it all the way down into the occupied space before the force of the airflow produced by the rotation is again overcome by the natural rising of hot air.

Often, medium- or low-speed settings are the best choice, but you might have to do some experiments with your fan and room setup.

With this placement, heat can be displaced from the ceilings and into the occupied areas of the room more easily.

A ceiling fan in the middle of the room would be able to move some heat but not as much as when the ceiling fan is right above the stove/fireplace.

However, in the middle of the room, there will be far more cold air near the floor than near the stove/fireplace. This means that this cold air can be displaced, which can create a warming effect similar to hot air being forced down.

When a ceiling fan is placed on the other side of the room from the stove/fireplace, there is far less warm air by the ceiling but more cold air dwelling near the floor.

Similar to the ceiling fan being in the middle of the room, this cold air can be moved up and produce a warming effect.

While the placement in the middle of the room or farther can still produce a warming effect, directly transferring the heat from the wood burning to the rest of the room via a ceiling fan right above the stove/fireplace would have the most noticeable effect on the warmth felt in the room.

Another consideration, particularly in a room where you deliberately set fires, is ceiling fan placement in relation to fire sprinklers.

When the heating of your home is controlled by an HVAC system, efficiency can be improved when the distribution of heat is aided by a ceiling fan. This is because you could lower the temperature of your HVAC system and still achieve comfort during the winter as the fan helps to evenly distribute warm air.

So, the efficiency is improved because the HVAC system doesn’t have to work as hard to achieve the same comfortable temperature.

Unfortunately, if your home’s heat is controlled by wood burning, you cannot save money and increase efficiency in the same way. This is because you cannot “turn down” the temperature of a fire when a fan is aiding with heat distribution and you don’t need as much heat production.

Ceiling fans used with wood burning can still increase efficiency in another way, though. The whole room will warm up faster without adding more fuel to the fire. This can be seen as increased efficiency.

On the other hand, however, increased airflow can also increase the rate of combustion, much like fanning flames can.

Although this allows the fire to grow faster, it can also cause it to consume more fuel. In the long run, this wouldn’t be very efficient since the amount of fuel needed per unit time would increase with the use of a ceiling fan.

Depending on how costly your wood is, this lack of fuel efficiency could be relatively inexpensive or somewhat expensive.

Overall, I would say that efficiency is not affected.

Will Using a Ceiling Fan Draw Smoke Into the Room?

There is some concern over whether a ceiling fan turning in the clockwise direction will draw smoke into the room.

If your fireplace or stove is closed off from the rest of the room, this shouldn’t be a problem.

However, if there are grates in the stove or the fireplace is completely open, smoke can be drawn into the room via the ceiling fan. This is because the ceiling fan is creating airflow in the upwards direction.

Because smoke naturally rises, it is usually ushered up the chimney with no problem, but with a source of upward airflow outside of the wood burning unit, smoke can be taken up into the room.

Can the Fan Distribute the Heat Through the House?

Depending on a few factors, a ceiling fan could distribute heat through the house and not just throughout the room that the fan is in.

The most ideal scenario would be an open-plan home with a fireplace in a more central location. With this layout, heat would more easily be distributed as there are no walls or doors keeping the heat in.

It is important to note that an open-plan home would be like a very large room for a fan to distribute air in. The result wouldn’t be as ideal as an evenly-heated small room, but the whole house could benefit from this singular ceiling fan and fireplace/stove.

If your home is not open-plan, then having a fireplace near the door of the enclosed room would be ideal. Keeping this door open would allow for the fan to distribute the heat a bit better than if the fireplace/stove was far away from the door.

Besides the layout of your home, the size of the fan would also impact if your fan could help heat your entire home.

Although the fan should run at a lower speed setting, a larger fan would be able to move more air and, therefore, heat a larger area faster and better.

A larger fan would consist of larger blades with a greater surface area that can move more air as well as a more powerful motor to effectively turn these heavier blades. 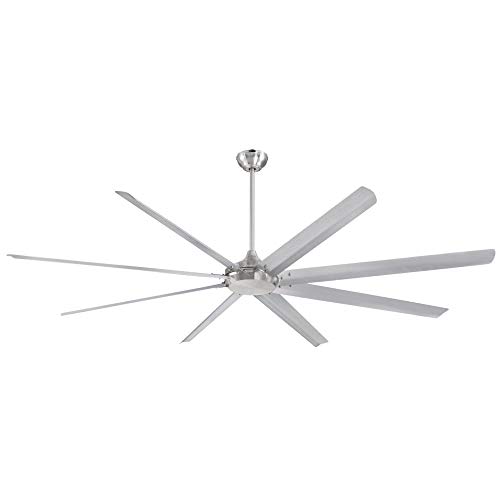 Even if your home has enclosed rooms, a large ceiling fan could move enough air to heat at least some of the home.