Dryers are known to be potential safety hazards in our homes. Many domestic fires are linked to malfunctioning or misused dryers. However, there are rules and regulations surrounding these appliances that, if followed, make them a safe enough addition to any home. Many of these rules revolve around the dryer’s ductwork, so a break here is something that can have negative consequences.

Broken dryer ducts let lint, gases, and steam escape. Airflow is also compromised. This causes condensation, which drips out the break and dryer, and traps lint inside the ducts. Moisture causes structural/electrical damage and mold growth. Lint is a fire risk. VOCs and gases cause irritation or even death.

What Do Dryer Ducts Carry?

To understand how a broken dryer duct can cause problems, we need to start with the knowledge of what these ducts carry.

They carry air (which is hot and laden with moisture), lint, and VOCs or other gases, depending on what type of dryer you have, what detergent or dryer sheets you use, etc.

While not directly dangerous, heat gathering in unexpected pockets in the house can cause issues like increased utility bills as your HVAC system tries to maintain a stable temperature in the face of unexpected additions of heat.

You may have noticed that I said that there were no direct dangers linked to heat being leaked from a broken dryer. However, there are some indirect effects.

Hot pockets can attract vermin looking for a warm place to sleep. These critters can bring disease into your home and eat through wiring and structural wooden beams, damage to which can have a range of dangerous consequences.

This heat can also increase the temperature of already hot areas, like the attic or the room housing your water heater. In addition to the simultaneous lint deposition, this can be a fire risk. We discuss this in more detail in the section on lint.

Range of Dangers Introduced By Moisture

Having steamy air in a house is not healthy. That’s why the dryer’s duct system exists. So, when this air is not leaving the house and is, instead, gathering in spaces and rooms within the structure, you can imagine that the potential repercussions will be significant.

But it’s not just escaping steamy air that you need to worry about.

When there is a break in the dryer duct and air escapes, the overall airflow efficiency within the duct declines. This is a result of the relationship between pressure and velocity.

When hot, humid air slows down, the increased time spent in the ducts allows it to cool down. Cold air cannot hold the same amount of moisture as hot air, and you end up with condensation.

This condensation can then drip back down the ducting, pooling in bends, running back into the dryer, and escaping from the break in the ducts to pool in whatever space or room happens to surround the broken section.

There are cosmetic repercussions to steam and condensation gathering in unexpected places, things like peeling paint or ugly water stains. But there are also far more serious consequences.

If your dryer duct is broken and you don’t find it for a few weeks to months, then the excess moisture can cause ceilings to cave in, structural beams to rot, or floors to collapse.

Some of the water may end up reaching your house’s electrical system, which can cause short-circuiting, appliance damage, and electrical fires.

Mould can grow on most damp surfaces. While not all molds are toxic, enough of them are to make it safer to prevent any mold from growing in your house.

So, the pooling water in the duct and the moisture that escapes the ducts can create the ideal environment for mold to grow, often in hidden places, where it can become quite a serious problem before you find out about it.

The negative effects on health caused by mold range from allergic reactions to severe respiratory illness.

Leaking Dryer is a Slip Hazard

As someone who has recently broken their elbow by slipping on wet floor tiles, I take water leaks quite seriously. Even if you know about the leak or you know that the tiles are slippery, one moment of thoughtlessness or having to dodge a canine laundry assistant can result in injury if the floor is wet.

A broken duct is not the only cause of a leaking dryer, though, so if this is your only indication that there might be a break, you can also consider other potential reasons.

Lint Can Be Deposited in Unknown Places

The fire risk associated with dryers typically stems from the combination of lint, which is a collection of tiny fibers produced by agitating the materials in the drum, and heat, which is crucial to the dryer’s function.

Dryers have lint traps, but these only catch about 30% of the lint produced. In addition, if you are a little lax in how often you empty it, then you further reduce this because the filter becomes saturated, so to speak.

The remaining lint is exhausted from the dryer with the hot and humid air. If this air is leaving the ducting through a break, then lint is leaving with it and you get depositions of lint in unexpected areas. It can even be picked up by your HVAC system. This will spread it around your house. It can also cycle it back to the boiler—talk about a fire risk!

Other areas where lint accumulation could become an increased fire risk include:

As mentioned earlier, a break in the duct affects the rate of air flowing through the system, and just as moisture can condense out of the air, lint is also deposited before it can be exhausted outside. Lint deposited in the duct also increases the risk of fire.

Additionally, it further reduces airflow by creating obstacles and narrowing the area through which air can move, perpetuating the problems.

Dryer sheets and detergents can release VOCs, which have the potential to negatively impact the health of those exposed to high levels or even low levels over a prolonged time. It is for this reason that dryer sheets are not always recommended for use with ventless dryers.

Vented dryers, however, don’t typically have to consider these VOCs. But when there is a break in the duct somewhere, then you may be exposed to these compounds. Some VOCs are considered irritants of the skin, eyes, and respiratory tract; others are carcinogenic.

If you have a gas dryer, then you have one more problem to think about. While the above section refers to potentially harmful gases, here we are talking about a definitely harmful—even fatal— gas. Carbon monoxide.

Carbon monoxide is particularly dangerous because it is colorless and odorless—virtually undetectable. Normally, it is exhausted to the outside environment, where it is diluted to the point that its danger is insignificant. However, should your dryer’s duct break, this gas can escape into the house and accumulate with potentially fatal consequences.

What Causes Dryer Ducts To Break?

According to the regulations regarding dryer venting in the International Residential Code, dryer ducts must be made from rigid metal with the exception of the transition duct (connecting the dryer to the ducting system), which can be made from flexible metal.

Flex duct is far more susceptible to damage than solid metal, so if any part of the system is damaged, it is most likely to be the transition duct. There are two benefits to this:

Transition ducts can break when they are squashed. The accessibility also means that they can sustain mechanical damage like items dropping onto them or tearing them. They are also more at risk from chewing vermin or even pets.

The solid metal ducts can still break. There are joins in the ductwork, which act as weak points. The flow of air causes vibrations, which places strain on the whole system, but particularly on these weak points. The vulnerability may be furthered by poor installation, such as insufficient support brackets and incorrect alignment of the different sections.

Over time, these joins can break or shift to create a place for air to escape.

If moisture lingers in your dyer, then it can eventually lead to rusting. Rusted metal is extremely weak and prone to breaking. Lingering moisture can occur if the ducting is too long, the dryer’s fan is functioning sub-optimally, the backdraft damper is broken, the terminal vent is screened, and a range of other causes.

Who Can Fix a Broken Dryer Duct?

If your transition duct is broken, then you should be able to purchase a new length of flex duct and replace it yourself. Make sure to get the correct size, though! It should be 4″ in diameter or match the diameter of the dryer and the rest of the duct system. 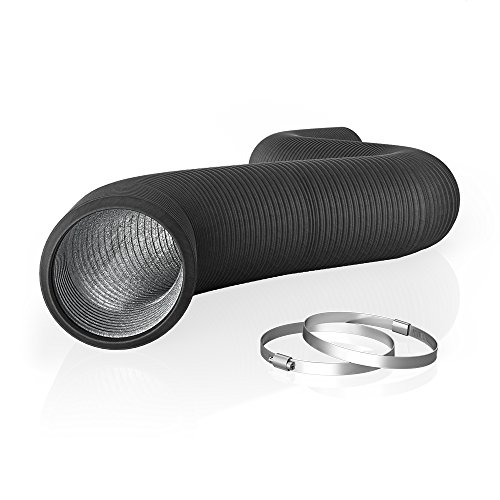 Suppose you only suspect that the duct is broken because your dryer is not functioning properly and you’ve ruled out other potential causes to the best of your abilities. In such a case, you can’t be sure where the break is and how severe it is, and it would be best to hire a professional.

A professional may also be the better route for any damage to the solid metal ducting because it’s difficult to reach and handle, particularly alone. You will never be patching a break in the dryer duct, so sectional replacement is likely.

There is a range of professionals who could do this job for you. General contractors, HVAC specialists, and even roofers are good bets.