A dryer belt wraps around the dryer drum to turn it. The stretch and friction from this turning action wear on the dryer belt until it breaks. After this, clothes won’t dry even though the dryer is still able to heat the clothes.

In some cases, it may be more cost-effective to buy a new dryer. However, in most cases, you can simply replace the belt. If possible, you’ll want to replace the dryer belt before it breaks if it is impeding the normal functioning of the appliance.

Dryer belts can be replaced relatively easily by homeowners. As dryer belts are one of the dryer’s moving parts, they are susceptible to wear and manufacturers make and sell the belts separately. In some cases, it may be better to replace the dryer.

Contents show table of contents
Dryer Belts Can Be Replaced
Is It Easy to Replace a Dryer Belt?
Knowing When It’s Time to Replace the Belt
Is Replacing a Dryer Belt Worth It?
Is It Possible to Make a Homemade Dryer Belt?
Can You Tighten the Dryer Belt Instead?
Sources
Was this helpful?

Dryer Belts Can Be Replaced

The dryer belt is a removable part of the dryer, so it is definitely possible to remove it and replace it with a new belt. 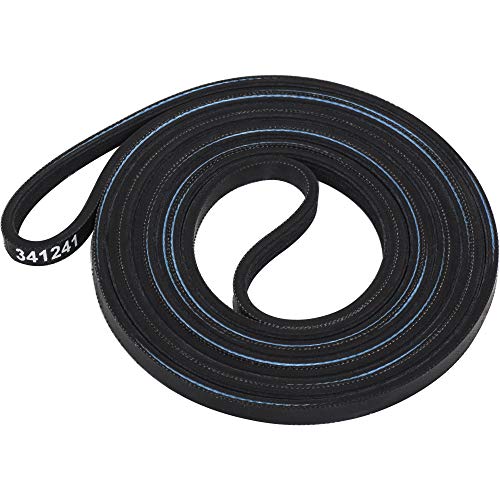 You can find replacement belts at your local hardware store or online. This dryer drum belt replacement (amazon link) has high compatibility with most dryer brands. It is 92 ¼” long. The most common belt dryer belt sizes are 92 ¼”, 87 ¾”, and  93″.

You can find the size you need in the appliance’s manual, by searching the model number online, or by measuring the old belt (this graphic can help). When using the old belt, bear in mind that it may have become stretched over time.

Is It Easy to Replace a Dryer Belt?

Replacing a dryer belt is a fairly easy task. If you’re taking on this DIY project yourself, expect it to take 15-90 minutes depending on how fast you work and your experience level.

The general steps for replacing the belt include:

Knowing When It’s Time to Replace the Belt

A belt needs to be replaced when it’s no longer functioning correctly. The biggest issue is when the dryer drum won’t turn, and therefore clothing won’t dry. However, there can be other signs too.

If you’re hearing the belt make noises, it may be worn but not broken. The loose belt will cause a loud squeaking noise (but this could also come from the motor, idler, or glide bearings).

If your dryer stops before the clothes have dried, it can be another sign that the belt needs replacing, as the drum isn’t turning as much as it normally would to allow airflow to the clothes.

Finally, although it could also be an electrical or another issue, if the dryer doesn’t start when you press start it may be due to the belt. In this case, it’s worth it to disassemble the dryer to check the belt’s condition and also rule out other issues before replacing the belt.

Is Replacing a Dryer Belt Worth It?

As long as your dryer is young and the only problem with it is the belt, it’s definitely worth it to replace the belt rather than the entire appliance. A new belt can last more than 10 years.

Dryers typically live 10-13 years, so if your dryer is older it may not be worth it to replace the dryer belt. This is because other parts of the dryer will start malfunctioning too.

For the same reason, check that other parts of the dryer aren’t causing issues before replacing the belt because in that case, the most cost-effective option is often replacing the dryer.

Is It Possible to Make a Homemade Dryer Belt?

Dryer belts are made of rubber, so theoretically if you can get the correct type, width, and length of material you could make one yourself.

If you’re using a material besides rubber, make sure it is fire/heat resistant as the temperatures in the dryer could be dangerous for flammable belt materials.

However, because dryer belts are so cheap it’s probably not worth it to make your own, especially at the risk that it won’t end up working anyway.

Also, consider the time and tools needed to make the belt. You’ll need to connect the ends (using heat to melt the rubber) to form a loop and make sure it’s a smooth connection.

Can You Tighten the Dryer Belt Instead?

Generally speaking, dryer belts can’t be tightened like other belts (say the one in your car). Drive belts in cars have specific components that tighten the belt called drive belt tensioners. These aren’t present in a dryer.

In dryer belts, the rubber heats up and stretches out, so the best way to “tighten” the dryer belt is to replace it. If your dryer belt needs to be replaced quite often (in intervals less than 8 years), it could be an issue with the idler pulley not moving correctly. In this case, you’ll need to repair the idler pulley so it can move freely, and then the replacement dryer belts will last longer.