Having the perfect pitch may not make your ceiling fan a baseball star or an opera singer, but it can help it cool your home, circulate more air, and spin more efficiently and quietly. To understand how and why, we need to delve more into just what ceiling fan blade pitch is and why it matters for your fan.

Whether you’re searching for a new ceiling fan and want a better grasp of what all the specifications mean, or you already have a noisy ceiling fan and you think the blade pitch may be the culprit, read on to understand what ceiling fan pitch is all about.

Ceiling fan blade pitch is the slope of the blade’s surface relative to the horizon. Higher pitch generally results in greater airflow and a narrower stream of air. Most home ceiling fans’ blades have pitches of 10 to 15 degrees.

What Is Ceiling Fan Blade Pitch?

The pitch of a ceiling fan blade is its slope relative to the horizon when viewed from the end of the blade. All ceiling fan blades have a pitch and can be anywhere from 10 to 25 degrees, with most for home use lying between 10 and 15 degrees.

How Does Blade Pitch Affect Airflow?

Let’s start with the blades completely horizontal. The blades will move easily because there’s almost no drag (that is, resistance or friction from the air) and will slice through the air rather than move it, resulting in no airflow.

At even higher pitches, airflow increases with a more concentrated stream of air that can be felt over a smaller area. Therefore, fans with higher pitches (around 25 degrees) are usually used for air circulation in industrial and commercial settings.

In practice, a ceiling fan’s airflow and efficiency is affected by factors other than blade pitch, such as the motor, blade length, blade shape, and distance from the ceiling. These factors work together to help the blades overcome drag when moving through air.

Out of all of these factors, the motor has the greatest bearing on the extent to which higher blade pitch can increase airflow since most household ceiling fans are not powerful enough to handle the increased drag faced by blades with higher pitches.

Flush-mount fans are closer to the ceiling, which reduces their airflow efficiency because there is less space for air to circulate above the blades. These fans mostly have low blade pitches around 10 degrees, further reducing airflow efficiency.

In this case, increasing blade pitch creates turbulence, causing the fan to vibrate and wobble because the small gap between the fan and the ceiling leaves insufficient space for airflow, causing the air to move rapidly between the blades and ceiling.

If you want to improve the airflow efficiency of a flush-mount fan, you’re better off installing a downrod (although this is not always possible) or selecting a fan with a more powerful motor or different blade shape. 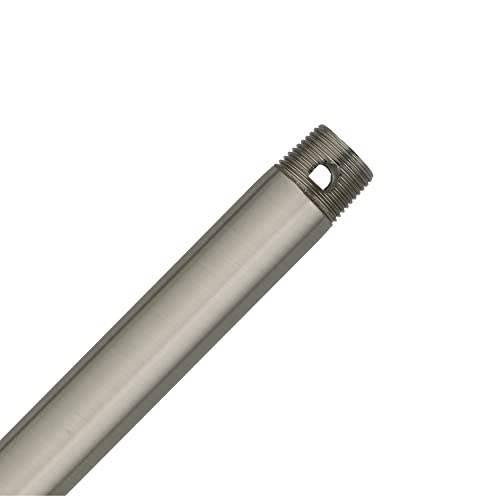 Ceiling fans with blade pitches that are too high or too low tend to produce excess noise. They can also be noisy if the pitch is not the same for every blade. All three of these situations tend to make the fan wobble, creating an irritating noise.

When the blade pitch is too high, the drag tends to be more than the motor can handle. As the motor overworks itself to move greater volumes of air, the blades fail to fully push all of the air, causing the fan unit to wobble.

When blade pitch is too low, the motor causes the fan blades to spin faster than intended, which can also cause the whole fan to wobble.

In both of the above cases, noise and wobbling can occur when the blade pitch is either too high or too low for the given motor.

Finally, the ceiling fan may also wobble and make noise when one or more blades’ pitch differs from the others’. When the pitch of even one blade is different, so is the amount of energy it requires to move air, throwing the whole fan off balance.

For most fans intended for home use, the ideal pitch is between 12 and 15 degrees. That’s because at this pitch, even relatively weak motors can produce a decent level of airflow over a wide area.

Sometimes, the ideal pitch for commercial and industrial ceiling fans can be as high as 20-25 degrees. However, these fans are intended primarily for air circulation, not cooling, and therefore they are not suitable for use in the home.

You can use a few different tools to measure the pitch of a ceiling fan blade, such as a bevel protractor with a level or an angle finder. Here, we’ll describe how to use angle finders to measure blade pitch since they are fairly easy to use.

If you don’t already have an angle finder, here are a few that are well-suited for the task:

If possible, you should measure blade pitch while the fan is fully attached to the ceiling. If you need to remove the fan, make sure that you can rest it on a even surface so that the whole fan unit is upright and level.

Once you’ve done this, the angle finder will conveniently provide the blade pitch in the digital display.

Can You Adjust the Pitch of a Ceiling Fan Blade?

While home ceiling fans are almost never designed with adjustable pitch blades, you can usually slightly adjust the pitch if the fan is wobbling. If the blade pitch on a home ceiling fan is off, it’s usually due to parts that have loosened or general wear and tear.

Often, the pitch of one or more blades can be thrown off if the bolts attaching them to the brackets have become loose. In this case, simply tightening the bolts may restore the blades to the right pitch. You can watch a tutorial on how to do this below:

Sometimes, the blade pitch changes over time because the blades have become warped or bent. In this case, the only way to solve the problem is to replace the blades or, if no replacements are available, the entire fan.

Those home ceiling fans that do have adjustable pitch are rare and mostly antiques as they served as a means of quickly changing between updraft and downdraft before reversible fan motors were viable.

Otherwise, only utilitarian commercial and industrial ceiling fans tend to have adjustable pitch. These powerful fans look right at home in a warehouse, but you probably wouldn’t want one in your living room.