Ceiling fans are relatively heavy devices that have the added force of rotation acting on the installation point. This makes proper mounting crucial to the safety of ceiling fan usage and the longevity of the fan.

The standard installation involves fixing the ceiling fan to a joist with a junction box. While the joist is what stabilizes and supports the fan, the junction box is still vital to the installation.

Ceiling fans cannot be mounted directly to a joist. A junction box is required to make the connection point strong enough and also to provide protection for the wires. Junction boxes are required for ceiling fans by the National Electrical Code.

You cannot mount a ceiling fan onto the joist directly. A junction box, ideally one that is fan-rated, needs to be the point of connection between the fan’s mounting bracket and the joist. 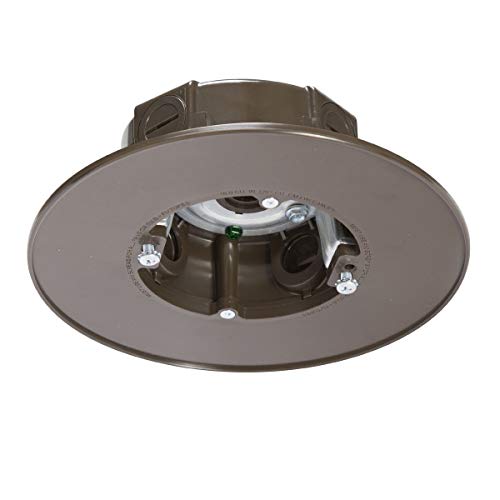 You can split the reasons why junction boxes are necessary into two main categories:

Ceiling fans are heavy items to suspend from a ceiling, particularly considering the fact that ceiling boards are often made from drywall. A few small lights are fine, but not a spinning fan.

The junction box itself is designed and built to be strong enough not to bend or break with the weight of the fan.

The National Electrical Code (NEC) demands that all electrical wiring connections be enclosed in an approved junction box.

The NEC is concerned with safe electrical installations, so we can assume that safety is the reasoning behind this regulation.

Regular junction boxes basically act as protective casings. Here are some of their functions:

Junction boxes come in different types, shapes and sizes. For a junction box to be effective, it needs to be suitable for the fan you’re installing. Here are some of the things to take into consideration while purchasing a junction box for your ceiling fan.

The weight rating of a junction box determines how much weight it is able to support. On average, ceiling fans weigh between 12 and 50 lbs.

As a general rule, the junction box should be able to support more than the actual weight of the fan because of the added pressure exerted by the fan when it is in motion.

The NEC demands that ceiling fans weighing 35 lbs and above be supported by a fan-rated junction box.

Ceiling fan-rated junction boxes are specially designed for ceiling fans and heavier light fixtures. They have a minimum weight rating of 50 lbs, but some can support up to 75 lbs.

To ensure a secure installation, it’s best to mount your ceiling fan with a fan-rated box even if it weighs under 35 lbs.

So, before making your purchase, ensure that the junction box is UL listed for use with ceiling fans.

Metal junction boxes are studier than plastic boxes and are the preferred option, especially if the ceiling fan is heavy.

Ceiling fan junction boxes are typically round or octagonal.

The boxes come in different depths, usually 1/2″ – 2 and 3/4″. Standard ceiling fan junction boxes are usually 2 and 3/4″ deep. This depth applies to both round and octagonal boxes.

The boxes are crafted so that wirings can be tucked into them while installing the fan.

Another variation of junction boxes that are sometimes used to mount ceiling fans is the pan or pancake box. This type of box has a depth of 1/2″ and does not have much room for wiring.

The design of the fan is going to determine whether it is suitable for your installation or not.

Old work junction boxes are designed for situations where open access to a ceiling joist is not available. Their retrofit design makes it possible to install the box through the drywall ceiling.

New work boxes are designed for situations where the joist is easily accessible. It is used for new construction where framing is exposed or when the attic is accessible.

There are also some boxes that are suitable for both old work and new work. So, only purchase a box that is ideal for your project.

The location of the joist will also influence your choice. If the installation hole is below a joist, you can install the box directly on the joist.

However, if the hole is between joists, you would have to use an adjustable brace. The box is attached to the brace, which is installed between adjacent joists.

The braces come in new and old work varieties, so you should also take that into consideration while making your purchase. 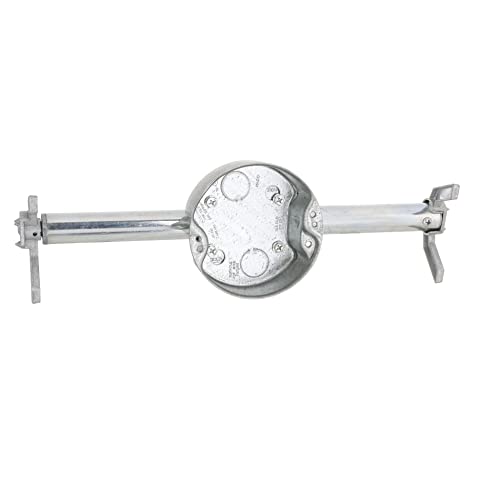 Ceiling fan junction boxes are pretty easy to find. You can purchase one online from your local home improvement store or from larger online stores. Supermarkets often have them in their home improvement sections as well for in-store purchase.

Ceiling fans need to be mounted on a secure surface that can support not just their weight but the vibrations and pressure that they release whenever they are in motion.

Ceiling fans should never be installed directly on a drywall ceiling because drywall and other ceiling materials aren’t strong or stable enough to hold the weight of a moving fan.

Joists are sturdy and are the only part of the ceiling structure that can support the weight of a ceiling fan. So, joist support is important for every ceiling fan installation.

Installing a fan without joist support leaves the fan vulnerable to a variety of problems: