Ceiling fans are generally well made and built to last for years of normal use. Leaving your fan running continuously without giving it a break will shorten its lifespan and comes with a margin of risk.

Ceiling fan technology is inherently safe, provided the installer and fan operator do their bit to ensure that we reduce the possible risks. Read on to see if running your ceiling fan continuously is safe.

Ceiling fans are considered to be safe for use over up to 8 hours, but they are not made to run 24/7. This will increase the risk of component failure and motor overheating, which have the ability to cause a fire.

Contents show table of contents
Ceiling Fans Are Meant to Run for Hours
Fans Running Non-Stop Wear Out More Quickly
Continuous Operation Can Present Safety Risk
Does the Fan Have a Thermal Fuse?
How Long Are Ceiling Fans Advised to Run For?
Depending on the Quality of the Fan
Depending on the Ceiling Fan’s Speed
Having the Fan on Is Not Always Necessary
Safety Considerations
Is the Fan Installed Properly?
Are Any Noises Coming out of the Fan?
Is the Fan Clean and Well Maintained?
Sources
Was this helpful?

Ceiling Fans Are Meant to Run for Hours

Ceiling fan manufacturers know that in order for fans to cool us, they have to be running. They also know that a quick 20 minutes in the middle of a hot summer day is not going to cut it. As such, they have designed ceiling fans to run for relatively long periods of time.

They also use materials and components that can withstand extended periods of use. These include air-cooled AC or DC motors housing and sealed, maintenance-free bearings, which are the only parts of the fan that endure any friction.

But running a fan for an extended period of time is different to running it continuously, and this is where the fan operator has to do their part to ensure the longevity and safety of the ceiling fans in their home. Don’t forget that improper fan use can void your warranty.

Before we get to the potential safety risks of over-used ceiling fans, it is also important to know that even if the risks are never realized, your ceiling fan is going to wear out more quickly with continuous use.

Fans that run non-stop are more prone to accelerated wear on moving parts, such as the bearings, due to heat buildup and friction.

Bearings within the fan wear down under normal operating conditions, but their lifespan is measured in years rather than months. It stands to reason that when a fan runs continuously, the useful lifespan of the fan will be reduced.

You can also get more immediate problems with overheating, such as the ceiling fan not working on all speeds.

Running your ceiling fan continuously is not advised as this practice increases the risk of something going wrong and posing a safety risk.

When your ceiling fan is operating for days or weeks on end, the motor never gets a break and never gets a chance to cool down. This increases the chance of it overheating.

But this is not just reserved for the motor. Continuous use of the fan can cause a component to fail, which can result in a short circuit, causing the wires to heat up.

A motor or circuit that overheats is not guaranteed to cause a fire but it does introduce the possibility and this is likely the greatest safety risk associated with running your ceiling fan continuously.

Does the Fan Have a Thermal Fuse?

A thermal fuse is typically used in appliances that actively generate heat, like dryers, but they can be found in any device that may produce heat as a byproduct of work, like ceiling fans.

If your ceiling fan has a thermal fuse, then the risk of fires linked to overheating is mitigated and you only really have to worry about the excessive wear on the fan when using it all the time. Note: the risk is mitigated; the motor and wires can still overheat.

So, what are thermal fuses and how do they mitigate the risk?

Thermal fuses are small devices that are specifically designed to prevent fires from occurring due to overheating. 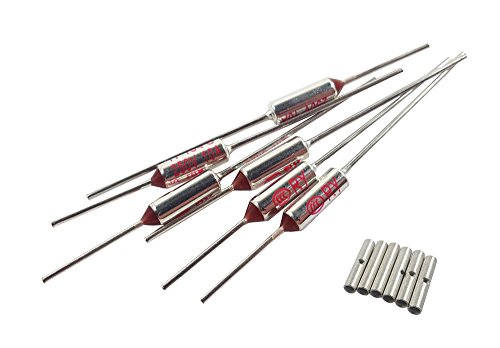 When excess heat is detected, the thermal fuse kicks into action and disconnects the current flowing to the problem, preventing continued heat buildup and ultimately preventing a fire.

How Long Are Ceiling Fans Advised to Run For?

The average maximum running time for a ceiling fan is about eight hours without a break.

As stated, this is just the average. There are so many different types, styles, and sizes of ceiling fans available on the market today that the best way to ascertain how long your particular ceiling fan can run for at a time will be to check the owners’ manual or contact the manufacturer.

The fan’s quality and the speed you run it at will also make a difference to what is considered too long.

Depending on the Quality of the Fan

The quality of a ceiling fan affects how well it will handle continuous use. It also determines how long the product is expected to last, and, to a certain extent, how much the fan costs.

Some manufacturers base the warranty periods on this timeline.

By implication, in general, a fan with a longer warranty should be one of greater quality and one that handles continuous operation better.

The relationship between cost and quality is actually a little less reliable as you can see from the table below, which shows some popular fan choices with their price category and warranties.

Depending on the Ceiling Fan’s Speed

Wear is more pronounced at higher operating speeds due to higher stresses and heat buildup on and within the fan parts. For this reason, it’s recommended that you don’t run a ceiling fan for more than eight hours continuously on the highest speed setting.

Running on slow speed can give you a few extra hours, but running it 24/7 at any speed will still have a negative effect or increase the likelihood of ceiling fan-related safety risks.

In addition to causing less stress on components, running newer ceiling fans on low settings can save energy and money. Modern ceiling fans use a Triac type regulator, which means these fans use less electricity when the fan turns slower.

However, old fans use regulators that contain resistors that use the same amount of electricity regardless of the speed setting.

Having the Fan on Is Not Always Necessary

Ceiling fans are physically incapable of increasing or decreasing the temperature in a room as they don’t have heating or cooling ability. Their specialty is to move air around a room. We feel cooler and more comfortable when the fan runs due to the wind chill generated by the circulating air.

As fans can’t physically change the air temperature in a room, it’s a pointless exercise to keep a fan running in an unoccupied space.

Turning the fan off when leaving the room will ensure the fan lasts longer, doesn’t overheat and become a safety hazard, and saves electricity.

If you really want to run your fan continuously or as near to continuously as makes no difference, then you need to take some factors into consideration.

The first we have already spoken about, and that is speed. If you’re going to do it, avoid the highest speed setting. The following sections detail another three points for consideration.

Is the Fan Installed Properly?

Ceiling fans can be pretty bulky and weigh anything up to 70 lbs (31 kg). Add to this weight the centrifugal force of the fan as it spins, and your mounting has to be sufficiently strong to ensure the fan does not wobble or break free due to loose or inadequate mounts.

If your ceiling fan is not properly installed, then all the problems associated with this are exacerbated with continuous use. Wobbling gets worse, screws get looser, wiring is more likely to get pinched or damaged, etc.

Are Any Noises Coming out of the Fan?

If you are technically overworking your ceiling fan, then you have to watch out for signs of trouble. One common indication that all is not well with the workings of a ceiling fan is noise generation.

When your fan starts making a noise that has not previously been present, or a certain noise gets louder or changes in characteristics, it means something has changed in how the fan operates.

Please don’t ignore the sound, as it could be an early warning requiring attention.

Is the Fan Clean and Well Maintained?

Ensuring that your ceiling fan becomes part of your household cleaning routine is a sure way of reducing the chance of the fans’ ventilation slots becoming clogged with dust. Dust is made up of various materials and is classified as flammable.

Ensuring that the fan’s motor can breathe, allowing it to cool sufficiently while running will prevent the fan from heating up, significantly reducing the possibility of a fan fire, even if you run it longer than recommended.

The cleaning process is as simple as running a microfiber duster over the fan several times a month.

The fan motors bearings require oiling from time to time to ensure they run freely and don’t wear, causing them to heat up and strain the motor. If you choose to run the fan continuously, you will likely have to oil the fan more often.

Before oiling your fan bearings, consult your owner’s manual. Many fans are fitted with maintenance-free, sealed bearings that do not need oiling.