Saying, “counterclockwise rotation is the best ceiling fan direction for the summer,” is too simple of a statement, particularly if you are pairing the ceiling fan with an HVAC or central air system. This is because the return vent and register locations in your home can dramatically impact which ceiling fan direction works best to cool your home.

Each of the following four configurations of low or high return vents or registers has its pros and cons, including how well hot air is removed, how well cold air is distributed, and if there is a wind chill effect.

Return vents, which remove air, and registers, which supply air, can be on the ceiling, on the floor, and on the walls near either the ceiling or the floor. 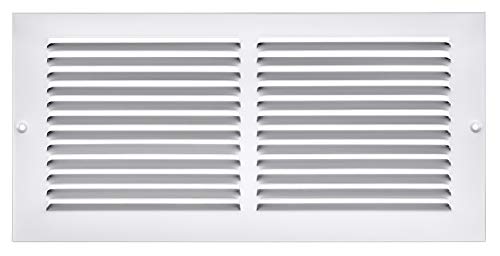 The location of these return vents and registers impacts what ceiling fan direction works the best because their location determines whether the central air is working with the natural flow of air or against it.

In most situations, it is best to work with the natural flow of air.

Low supply registers and high return vents is not the best configuration when the goal is to cool a room (it’s also not the worst, so let’s call it a semi-poor configuration).

The drawback is that the cold air is supplied at the floor. Because cold, dense air sinks, it will remain on the floor. Cold air that sits on the floor will not do much to cool the inhabitants of the room beyond chilling their feet and legs.

The act of drawing air out at the top of the room pulls air up from the lower regions of the room, i.e., where the cooled air is supplied. Thus, the colder air is drawn through the room, and can cool the occupants. But this can be augmented with a ceiling fan.

A clockwise-turning ceiling fan would be ideal because it also pulls air up. This would allow for the cold air stuck near the floor to be moved to where it can be felt by the occupants of the room, creating an air circulation cycle of cold air being forced up and then sinking repeatedly.

A possible con to using a clockwise-turning ceiling fan is that the warm air near the ceiling will be displaced by colder air, forcing the warm air downwards. However, the effects of this will be limited (negligible) since the high vents should be able to remove this warm air before it is pushed down.

It is important to note that clockwise rotation will not provide a wind chill effect, which is when moving air blows the naturally-forming layer of heat away from a person’s skin, allowing them to lose more body heat.

The combination of low registers and low return vents is objectively the poorest option out of the four configurations presented in this article.

With low registers, you’ll have the same problem as the previous configuration where the cold air is supplied at the floor and will stay there because cold, dense air naturally sinks.

However, instead of this being countered by the chimney effect of removing warm air high up in the room, you will also have the added problem of low return vents removing the cold air before it can move through the room. Your feet and legs will still be cool, but that’s about it.

A clockwise-rotating ceiling fan will bring the cold air up and distribute it across the room so that the occupants can be cooled more effectively.

Unfortunately, warmer air near the ceiling will be displaced, forcing it downwards and making the room feel warmer (not too much warmer, but you may find yourself setting the thermostat lower than if you had higher return vents).

As an added problem, a clockwise-rotating fan will not create a wind chill effect.

The high registers would provide cool air that would naturally sink through the occupied space of the room instead of being trapped in the lowest portions of the room.

High return vents would also allow for the removal of naturally rising warm air. There is the possibility that some of the supplied cool air will be removed from the room by the return vents before it has a chance to sink, but it’s not going to be as noticeable as when the returns and registers are both low down.

Utilizing a ceiling fan along with central air in this situation will enhance this setup even more for a more comfortable home temperature and energy savings.

The best ceiling fan direction in summer with vents/registers near the ceiling would be counterclockwise, which is, in fact, summer mode.

To speed up the natural sinking of cold, dense air, the downwards push from counterclockwise fan movement would be best.

A wind chill effect would also be achieved because the air would be actively blowing onto you so heat loss processes will be sped up.

As the wind chill effect makes you feel even colder even though it doesn’t change the temperature of the room like the central air does, it means you can set the thermostat higher, which uses less electricity.

While the low register and high return vent configuration can be described as semi-poor, high registers and low return vents can be looked at as a semi-good configuration.

With high registers, cold air is supplied higher and will naturally sink so that the colder temperatures will be felt throughout the occupied space.

With low vents, this sinking cold air will be removed as it settles near the floor where the vents are located. This is not necessarily bad, though, since the active removal of the cold air further down will help pull the air down and through the occupied space.

As is the case with the previous situation, counterclockwise rotation of the ceiling fan will work the best in this configuration.

Forcing air down will aid in the natural process of the cold air sinking and will distribute the cold air through the occupied space even better.