Whether you want to eliminate odors, cool a room down, or if you’d just like to replace stale, stagnant air, allowing outside air in can rejuvenate your home. Passive entry can work, but it is much more efficient to use other strategies to actively draw in the outside air.

Although a ceiling fan can aid in the distribution of outside air, different devices can aid more. Based on the creation of low-pressure systems and processes of air circulation, exhaust systems, fans, and air circulators can aid in pulling in outside air.

In order to decide which ceiling fan direction would be the best to pull in outside air efficiently, you need to know that the ideal direction largely depends on how far away the fan is from the open window.

If your ceiling fan is placed close to an open window, you must consider if the airflow will allow for outside air to enter.

The highest point in the pitched blade leads for a ceiling fan spinning in the counterclockwise direction. This scoops the air downwards and creates a column of downwards-moving air directly below the fan.

A column of air near an open window would effectively be like a wall to the air outside.

Downwards airflow would also tend to push inside air out rather than the goal of pulling outside air in.

To prevent the ceiling fan from inhibiting outside air from coming in, clockwise rotation is ideal if the fan is near the window.

Clockwise airflow involves upwards-moving air that is initiated by the lowest point in the pitched blades leading as the ceiling fan turns.

Upwards airflow will take air from below the fan and draw it up. Since the window is below the fan, outside air will be drawn in and the ceiling fan will aid in distributing it through the room.

The downside to this is that clockwise rotation produces more subtle airflow and doesn’t provide wind chill.

Fan on Opposite Side: Counterclockwise Rotation

When your ceiling fan is far from the open window, you don’t have to worry about barriers to the air created by counterclockwise airflow.

Instead, ensuring the maximum amount of airflow in the room would be the best for bringing outside air in.

As mentioned, for a ceiling fan turning clockwise, its airflow is less concentrated. This is because most air movement occurs near the ceiling, where it cannot be felt by occupants.

The fast-moving air hits the ceiling, where it is slowed down. It then will either bounce off at a slower speed or will stay near the ceiling where it may naturally sink.

As you can see, the conditions of a clockwise-turning ceiling fan are not ideal for maximized airflow conditions.

Instead, counterclockwise rotation is the most ideal if the ceiling fan is far from the window.

With counterclockwise rotation, a large amount of airflow is felt directly below the fan and outside of the air column as well.

Unlike clockwise rotation, counterclockwise airflow is uninhibited by solid objects, ideally, and is much more forceful.

This airflow impacts the whole room, creating air circulation that will pull outside air in.

Ceiling Fans Are Not The Most Effective Option

Although these ceiling fan directions provide the best inflow of outside air possible with a ceiling fan, in general, these devices are not the best option for pulling outside air into the home. This is because they operate on a mostly vertical axis.

For clockwise and counterclockwise rotation, a vertical column of moving air is created.

Window air movement works more on a horizontal axis because their openings are vertical, so vertical air movement is not ideal.

Instead, devices that can move air horizontally should be used.

In addition, the most efficient way to bring air into a room is to push air out of it. This creates a strong pressure gradient that pulls air in from the window. Ceiling fans move air; they don’t remove it.

As far as air replacement goes, a range hood can be very effective.

When it is on, air is pulled up through the range hood, through the ducts, and is expelled outside. When air is removed from the home or any space, a negative pressure system is created.

Just like warm air rises and cold air falls, another natural rule for air is that it will always move from a place of higher pressure to a place of lower pressure.

Air removed through a range hood can be easily replaced by air coming in through open windows, particularly those on the opposite side of the room or space.

It’s a viable system for cooling your home if you don’t have an HVAC system.

There is no need to spend money on the system if you already have a kitchen range hood.

Range hoods can be awfully loud.

Range hoods also require invasive venting, which is quite an undertaking if you are only installing it to pull air in through the window!

It is also possible that cold air can invade your home in the winter through these vents if the damper is broken.

Although they can create a low-pressure system that can pull large amounts of outside air in, range hoods cannot assist in circulating this air throughout the home.

Similar to a range hood, bathroom fans can remove air from your home through their ventilation. As air is removed, a negative pressure system is created, pulling outside air in.

It is likely that you’ve experienced this first-hand.

If you’ve ever stood in your bathroom near the door, you will most likely feel air rushing into the bathroom through the gaps in the door frame if the bathroom exhaust fan is on. 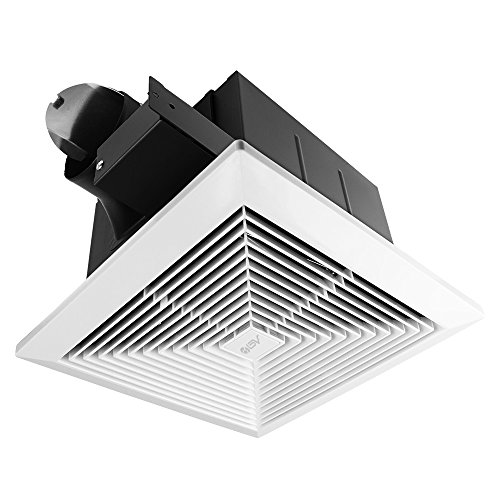 In this situation, you are experiencing being in a room with a negative pressure system that is being corrected.

As long as there is an open window near enough to your bathroom, an exhaust fan in your bathroom will pull in large amounts of outside air whenever it is running.

Bathroom fans move large amounts of air, so the volume of fresh outside air entering the house is going to be noticeable.

You can use it to help cool the house even if you don’t have an HVAC system.

If you already have a bathroom fan, then this method of supplying the house with fresh outside air is as cost-effective as the fan is to run.

Specifically installing a bathroom fan in a room for the purpose of ventilating that room (i.e., not just using the bathroom fan to try to pull air in from this room) is a much better option than installing a range hood for this purpose. Bathroom fans are cheaper and more discrete.

Much like a range hood, bathroom exhaust fans are invasive to install and can be expensive (certainly more expensive than a ceiling fan) if you do not already have the bathroom ventilation system in place.

They must also be maintained through routine cleanings in order for them to work at their best.

Similar to a range hood, they also do not circulate the outside air through the home. The outside air will most likely be pulled towards the location of the exhaust vent, which may or may not be the location that needs the most fresh air.

Setting a floor fan near an open window can be a cheap way to distribute outside air in your home.

Since floor fans take in air at their back, the floor fan must be pointed into the room.

While running, the fan will take in the outside air at its back and distribute it throughout the room.

No invasive ducting is required and the outside air is distributed through the room rather than just moved towards the low-pressure system.

They don’t need to be installed, just set up.

A floor fan is inexpensive with the usual price being around $20 or $30.

They come in a range of sizes, are portable, and can be stored out of sight when not in use.

You get wind chill on top of outside air, which means it can cool you in two ways.

It is not as effective as it would be if the fan was mounted directly in front of the window. However, the fact that air is being pushed into the room by the fan means that air is coming in through the window. You can also get a pedestal fan, which sits higher.

If you have limited storage, then the fan will have to sit out all year, and they are not very aesthetic pieces.

Speaking of fans mounted directly in front of the window…window fans can be very effective at drawing in outside air. 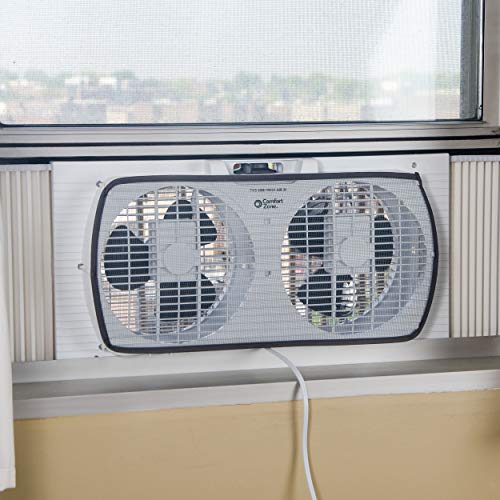 A window fan only takes in air from the outside since the fan’s back is placed outside and this is what is pushed through the room.

Window fans are not that pricey, costing around $30.

They don’t need to be vented.

Window fans also often come with the option of reversing the direction of airflow. That way, indoor air can be removed from the room rather than pulled into the room.

Window fans are only really effective for the room that they are in, although they can be paired with other devices to pull air through the house.

Window fans block out light coming in from the window.

They are not often that pretty to look at and they are more permanent than a floor fan.

While fans circulate the air, they are not air circulators. If this is confusing, check out how fans and air circulators differ before reading the rest of this section.

Air circulators have blades and pull air in through the back. The stream of air released is a widening vortex of effectively moving air that can reach far and wide without buffeting anyone in the room.

Air circulators are still affordable, running from $30 to $150. 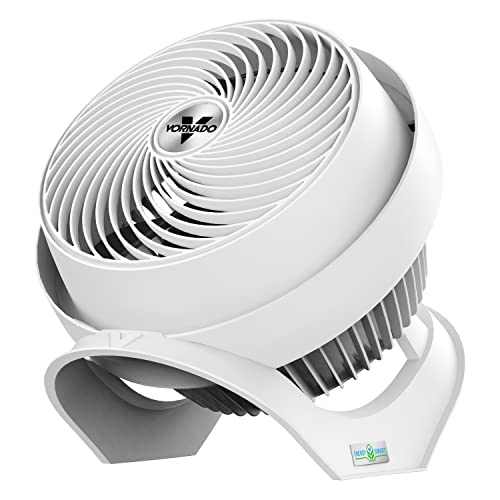 They don’t need ductwork or installation.

Air circulators are portable and can be stored when not in use.

They are very good at eliminating cold or hot spots by effectively circulating all the air in a room.

While effective, air circulators are most effective in the room in which they are placed. To push outside air into other parts of the house would require additional devices and systems.

You will have to find somewhere to store it when it is not in use.