It’s very tempting to think that the electrical box for fittings like ceiling fans is just to make everything neater. While they are not that expensive, if you are ready to hang your ceiling fan and find that you don’t have one, it can be quite frustrating to think about having to go out to the store to get one.

So, how important is that small little metal box? This article covers the answer to this question, from the codes to the practicalities.

Ceiling fans cannot be installed without an electrical box. They are required by code because they serve an important role in anchoring the ceiling fan, protecting the wires, and protecting the house and occupants from the wires.

Contents show table of contents
What Do the Codes Say?
What Do Electrical Boxes Do?
Provide an Anchoring Point
Encloses and Protects Wiring
No Reason to Omit Electrical Boxes
Sources
Was this helpful?

What Do the Codes Say?

Although the question this article is considering isn’t explicitly discussed in the building codes, Section E3406.11.3 of the International Residential Code (IRC) offers some insight.

“Where conductors are to be spliced, terminated or connected to fixtures or devices, a minimum length of 6 inches (152 mm) of free conductor shall be provided at each outlet, junction, or switch point. The required length shall be measured from the point in the box where the conductor emerges from its raceway or cable sheath. Where the opening to an outlet, junction or switch point is less than 8 inches (200 mm) in any dimension, each conductor shall be long enough to extend at least 3 inches (75 mm) outside of such opening.”

At first glance, you might think that this has nothing to do with junction boxes. However, if we pull out a few relevant parts, it will make more sense.

“Where conductors are to be…connected to fixtures…free conductor shall be provided at each outlet, junction, or switch.”

So, what we can infer from this is that when it comes to connecting wiring for fixtures, you have three options: outlets, junctions, and switches.

Where you connect the ceiling fan to the ceiling wiring, switches and outlets are not appropriate, leaving you with the option of junctions.

What Do Electrical Boxes Do?

In order to understand why junction boxes are important, you need to know what functions they actually serve. Yes, they make the wiring neater, but this is a by-product, not the actual function.

In the case of the ceiling fan, electrical boxes are connected to the joists and help to stabilize and strengthen the fan.

Electrical boxes also come in different materials. They can be made of metals (amazon link) or plastics (amazon link), but not all are appropriate for ceiling fans. Metal boxes are the best because they are the strongest, which is good for the weight of ceiling fans. 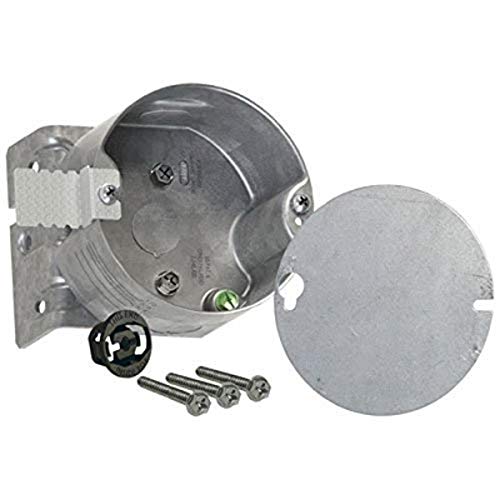 The ceiling fan I had in my living room was installed without an electrical box. Whenever it was turned on, it rattled and swayed as the blades rotated and was somewhat frightening to stand under!

Trust me; the junction box is important for stability.

Without the electrical box, the fan itself has a greater chance of coming loose and falling.

Fan-Rated for Fans Over 35 Lbs

Fans weighing over 35 lbs are required to have a fan-rated electrical box. Electrical boxes suitable for being used with a fan will be labeled as such by the manufacturer.

If a fan is purchased and comes with an electrical box, that box is safe to use with the ceiling fan. It is most common for fan-rated electrical boxes to be made of metal, but there are a few plastic options as well.

If one were to use a non-fan-rated electrical box for a fan over 35 lbs, they run the risk of the box breaking under the weight of the fan.

There are three main ways in which junction boxes protect the wiring.

Guards Against Physical Damage to Wires

In the case of a ceiling fan, there will be some vibrations caused by the spinning blades (but there should be no wobbling!). These vibrations can impact the wires by causing debris to fall on them or causing the wires to rub together.

The electrical box physically protects the wires from this debris and also holds the wires securely and snuggly so that they are not rubbing against one another as much.

The wires then have the potential to come into contact with materials within the ceiling. This may include insulation, wood, ducts, metals, and even other bare wires. These material can then become electrified, which is a shock risk.

By using an electrical box, all the wires that are being used with the ceiling fan are separated from these free spaces. They are protected within the electrical box, and cannot cause problems.

The shock risk is also not just indirect. If the wires are loose, you can directly come into contact with them while you work on the fan or in the ceiling.

Ideally, bare wires are capped, but even with such a precaution, contact with another wire is possible and could create serious problems.

Electrical fires could start in many different ways when considering a ceiling fan. An electrical box does many different things that can help prevent these possibilities.

Without an electrical box, debris, like wood flakes, insulation, ceiling boards, and other wires could come into contact with the wires of the ceiling fan. These are flammable and could lead to electrical fires.

Metal electrical boxes can also serve as a ground. This means that if there were excess current, the box would safely and effectively disperse the current so that a fire would not start.

No Reason to Omit Electrical Boxes

In addition to their requirement by code, there is no reason that electrical boxes should be omitted from a ceiling fan installation.

Electrical boxes are cheap and come in various designs. This means that it is easy to find the box that best suits your needs.

Additionally, electrical boxes are relatively easy to install. Commonly, all it takes is for a few screws or nails to be used to fasten the box to the joist.

Electrical boxes also provide another level of safety both internally (for the wires) and externally (anchoring the fan so that there is little to no wobbling when it is on).