When the heat just gets too much during the summer, we all switch on our ceiling fans, whether we have an AC or not. There is just something about the air being blown onto you that seems to cool us down and refresh us.

Ceiling fans are effective at cooling you in the summer. That’s their primary purpose, and they have been carrying out this purpose successfully since about 1882! Not even modern inventions like ACs have been able to force these appliances into obscurity. Let’s look at how they work and what makes them effective.

Ceiling fans are effective in summer. The pitched and rotating blades push air into the space below the fan, blowing it over the occupants in this space. The moving air pushes heat away from the skin’s surface, allowing more heat to escape into the air against the skin.

How Do Ceiling Fans Cool You?

Ceiling fans, unlike ACs, do not create cold air. They only move air (exactly how this is done will be explained in the next section), which creates a wind chill effect.

Wind chill is the effect that one feels due to air movement. It is a perceived drop in air temperature that is really a drop in the temperature of your skin.

In order to feel the effects of the ceiling fan, you actually need to physically be in the room as ceiling fans don’t cool the room, but cool the occupants of it.

Ceiling fans may not create cold air, but they are efficient at moving it. The blades of a ceiling fan are set at an angle or pitch, which enables them to move the air in a particular room. The fan circulates anti-clockwise in summer mode, towards the higher end of the blades.

This motion draws the air along the blade’s pitch, which pushes it down in a column below the ceiling fan.

The air that is around and above the fan will be sucked into the space vacated by the downward moving air and it too is pushed down towards the lower part of the room. The air that is forced downwards displaces the existing air in that space, pushing it to other parts of the room.

Those sitting directly below the fan will feel the full effects of this downdraft, and will consequently feel cooler due to the wind chill effect explained above.

The outward movement of displaced air is not significant enough to produce wind chill.

Because of the way that ceiling fans work, they are effective in cooling you while you are outdoors. This is something an AC can’t do. However, you have to use the correct fan. Indoor ceiling fans will be dangerous to install in outdoor areas, even if they are covered, like a porch.

We now know that ceiling fans can make a person feel cooler during summer due to the wind chill effect, but how well this effect actually works is dependent on a variety of factors that are explored below.

An important component that determines just how effective the ceiling fan will be at cooling you down, is the capacity and power of the fan’s motor. These motors come in a variety of sizes and are either AC or DC powered. The motor is one of the determining factors of fan blade speed.

DC fan motors are up to three times more efficient than AC motors of the same size. A powerful motor will be more expensive, but it will provide the ceiling fan with the optimal ability for airflow. It will allow the fan to spin at faster speeds, increasing the effects of the wind chill that you may feel.

You might want to reconsider buying a cheaper fan with a poorer motor as these are unlikely to perform as well, and won’t last half as long.

The specific design of your ceiling fan’s blades will also determine its effectiveness.

Firstly, the shape of your blades is of high importance. A blade that is more paddle-shaped is more efficient at circulating air, but it won’t spin as fast as a backward curved blade, which is better at circulating air at higher speeds.

The blades of your ceiling fan should also be long (around 50″) in order to allow them to easily circulate the air in larger rooms. They may not spin as fast as shorter blades, but their length enables them to be quite efficient at cooling a room at lower speeds.

Another component of blade design that helps to determine the efficiency of a ceiling fan, is the number of blades on the fan. While you may think that more blades mean greater efficiency, the opposite is true. Having fewer blades means there will be less air resistance as the blades rotate. The motor won’t have to work as hard to spin the blades, allowing it to be more efficient.

Blade pitch is also an important factor that affects efficiency. The pitch refers to the angle of the blades as they move. Experts suggest having a blade at around 10-12 degrees would be the most efficient, as a more severe pitch will need a more powerful motor to achieve the same results and a less severe pitch will not “scoop” air as well.

Where you place your ceiling fan is actually really important when it comes to how well it will move air.

It is advised to install the fan in the center of the room, 8-10″ from the ceiling, 8-9 ft from the floor, and 18″ from the walls—these are known as the ceiling fan clearances and they are designed to ensure optimal functioning.

You will find that turning your ceiling fan on while you have your AC running will really make the room a cool oasis during the hot, humid months of summer.

The cold air that is produced by the AC will be able to circulate faster around the room as the ceiling fan distributes it. The occupants in the room will definitely feel a lot cooler a lot faster than if the ceiling fan or the AC were to run in isolation. 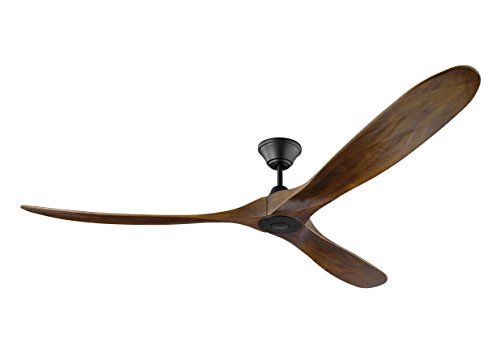 Doing this will also make your AC more energy efficient. The combination of the cold air and the wind chill will make the room feel quite chilly. Turning the thermostat to a higher room temperature won’t make the room any warmer as the wind chill effect will still be in place.

Yet, setting the thermostat at higher temperatures means less energy will be used by your AC to drop your air to the desired temperature. You will feel just as cool as if your thermostat was set lower, but you’ll be paying a lot less at the end of the month.

While ceiling fans come with a winter mode, they are far less effective at heating than they are at cooling.