A ceiling fan can feel like a necessity to many as people crave a cool relief from heat. However, ceiling fans are reliant on creating airflow around people, so if placed too high off the ground, they may not be as effective.

But just because you have a high ceiling doesn’t mean you have to forfeit the advantages of a ceiling fan. Depending on how high is high, you may only lose some of the benefits or only benefit to a lesser extent.

Ceiling fans can work with high ceilings. However, only downrod installation will be effective, and extender rods may be needed. The fan must not sit more than 9-11′ above the floor. Long downrods can decrease the fan’s winter mode effectiveness.

Contents show table of contents
Fan Must Be Low Enough to Be Effective
Ceiling Fans Can Work With High Ceilings
No Flush-Mount Fans
May Need Extender Rod
Go For A More Powerful Fan
Winter Mode Efficiency Is Reduced
Will Fan Detract From Ceiling Height?
Sources
Was this helpful?

Fan Must Be Low Enough to Be Effective

As we know, fans do not cool or warm the air itself but rather more evenly distribute the room’s overall temperature.

Nevertheless, inhabitants of the room are able to feel cooler on a hot summer’s day when their fan is turned on. The cooling mechanism of a ceiling fan relies on the airflow it generates reaching and moving over the occupants of a room. This cooling mechanism is known as the wind chill effect.

Since the airflow will physically need to touch an individual in order for them to feel the effects, the ceiling fan needs to be installed so that it hangs low enough for the air to reach a person.

Of course, installing the fan too low off the ceiling can bring about certain safety hazards. You don’t want the fan to be so low that it swipes off your hat as you walk past!

Guidelines state that the fan cannot be less than 7′ above the floor. They don’t mention a maximum height, but it makes logical sense that having your ceiling fan too high off the ground may limit its effectiveness.

It all depends on what you mean by a high ceiling and what design decisions you make to counteract the higher ceiling.

Now, floor clearance is not the same as ceiling height. You can install a fan on a ceiling that is 20′ high and still achieve a sufficient floor clearance by using a longer downrod, which we will talk more about later.

If you have a ceiling taller than 9′, then you will not be able to go for a flush mount ceiling fan design if you want to maximize the effectiveness of the wind chill effect.

You can still achieve a level of airflow and circulation in a room with flush mount fans on ceilings of this height, but as soon as you get taller than 9′, you are most likely just circulating the air above the occupied space of the room.

Downrod installations are really the best route for high ceilings, and this may not even be enough.

So, if your regular downrod is not long enough to keep the fan at the correct height, then you are still able to install your ceiling fan and benefit from it if you use an extender rod.

You will have to find one that is the correct length and is compatible with your ceiling fan.

You may find that your particular ceiling fan brand may be compatible with a certain extender rod. For instance, you can buy the affordable 24in Ceiling Fan Extension Down rod (amazon link), which is only made for WAC lighting products. 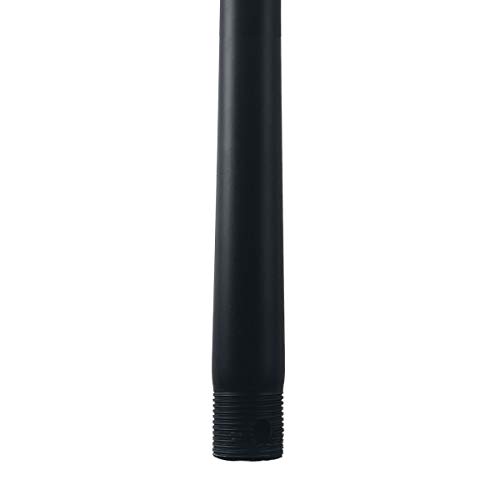 You can find generic extender rods that are likely to fit with most ceiling fan brands, such as the Ciata Ceiling Fan Extension Rod (amazon link), which is compatible with all fans that have a 1/2″ inner diameter.

If your particular fan cannot be extended, then it is likely not an option and you may have to look at purchasing a different fan.

Go For A More Powerful Fan

Higher ceilings typically mean that you need fans with greater CFM capacity (because the volume of the room, on which CFM is based, is greater). However, you may still need to go up a capacity rating or two in order to facilitate ceilings that are very high.

The more powerful the ceiling fan motor, the more likely it is that the airflow generated has enough energy to extend into the occupied space.

Having to go for larger-than-average fans can mean that your options in terms of brand and design are more limited.

Some companies have capitalized on this shortage and have created fans that are specifically for high ceilings. However, these do come at quite a high price. 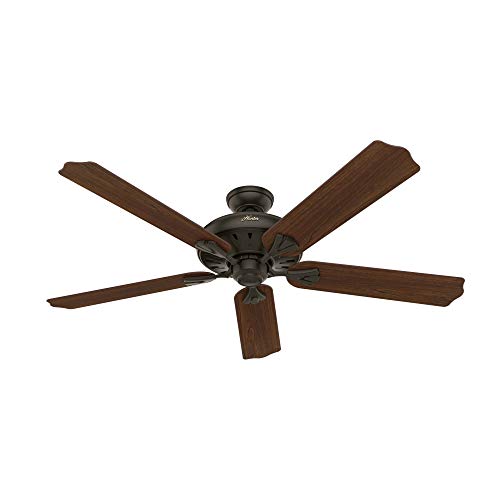 A consequence of having very high ceilings with a ceiling fan is that you may not be able to feel the effects of the fan’s winter mode, if it has one.

In this mode, the fan’s blades rotate clockwise as opposed to counterclockwise, and air is pulled up from the occupied space. This then displaces the air at the ceiling, which is typically warmer, and sends this air down to fill the space around the room’s occupants.

In itself, winter mode is not really that effective as the warm air that is dispersed just becomes diluted. However, adding an external heat source to the ceiling fan in winter mode and you make both devices more effective and efficient.

When you have a higher ceiling, to secure the effectiveness of the cooling mechanism, you typically increase the distance between the ceiling and the ceiling fan. By doing this, you limit how well the fan can exert an influence on the rising warm air.

Will Fan Detract From Ceiling Height?

We all know that tall ceilings, like vaulted or cathedral ceilings, are a big pro for any homeowner. The way your eye is immediately drawn upwards makes the space seem significantly larger than it is in reality. Often, people accentuate this feature by adding in beams or painting the ceiling the same color as the walls.

Imagine throwing a clunky big ceiling fan below this ceiling? While you may still experience some physical benefits of the fan, you might be taking away the effects of the rooms extra height as it obstructs a person’s view of the entire ceiling.