Smells from a dishwasher can be some of the most unpleasant things we can encounter in our homes. Not only are they unpleasant, though, they typically indicate that something is happening in our dishwashers that can negatively impact our health.

Below, we are going to go over the three most common dishwasher smells, what causes them, how they pose a risk to health, and, most importantly, what to do about them and how to prevent a recurrence.

Common dishwasher smells are putrid odors, sulfur odors, and musty odors. They signify rancid food, escaping drain gas, and mold growth, respectively. They are particularly dangerous because the bacteria and mold causing the smell can come into contact with dishes that are eaten off of or drank out of.

The Danger of Dishwasher Smells

When it comes to dishwasher smells, it’s not necessarily the odor itself that poses the threat to your health, although it can.

1. Dishwashers Can Have a Putrid Smell

A putrid smell is one that commonly comes from rotting food (especially meats). I most associate this smell with road kill!

For those who don’t know what road kill smells like, count yourselves lucky.

But to help, imagine you make a massive pot of stew at the beginning of the week in summer. You discard all the meat off-cuts and vegetable peelings into the kitchen bin. The smell you get when you open your bin at the end of the week—that’s putrid.

This smell would be most noticeable when loading or unloading the dishwasher, but it may also be smelled if the dishwasher is just standing open.

There are quite a few potential causes for your dishwasher giving off a putrid smell, including:

In each of these cases, the food will start to smell putrid if left in these parts of the machine for days at a time.

One day may not create any smells. It’s likely that even two or three days won’t, either. But after about four days, the smells will become noticeable.

Food can get caught or stuck in various parts of the dishwasher during the washing cycle. Dishwashers are designed to try and prevent this from happening.

The internal sides are kept as smooth and flat as possible, and the racks are baskets as opposed to solid bins with some drainage holes.

However, there is a user element involved as well.

For example, you shouldn’t leave big chunks of food on your dishes. They should be scraped or even rinsed clean before putting them in the dishwasher. Now, I’m not saying wash your dishes before loading them—that would be a waste of time—but don’t leave bits on them.

Another way that users are supposed to help prevent food from putrefying in the dishwasher is by cleaning out the filter regularly. This is designed to catch larger bits of food that may clog up your drains, but you don’t want this sitting in the filter for any extended period of time.

The most dangerous part of this smell is the thriving bacteria that are present. There are two big problems with bacteria starting to form in your dishwasher.

The first is that the dishwasher will no longer actually clean your dishes. Even if the dishes go through a wash cycle, if there are bacteria inside that are living off of stuck food, they will spread to the “new” plates to look for more food (even when they’re “clean”).

This is also dangerous because the bacteria could then spread to the rest of your kitchen. Ingesting this bacteria could be detrimental to your health. Depending on the type of bacteria present, you may experience feelings of general illness or flu, or you may end up with something more serious.

A less obvious danger could occur if your dishwasher experiences backflow as a result of completely blocked filters or drains.

You do not want your dishes sitting in gross drain water!

If food is getting caught in parts of the dishwasher other than the filter or drain, then you can use the following approach:

If the food is caught in your filter, then cleaning it out should solve the problem:

If the problem is food stuck in the drain, this can be cleaned using equal parts baking soda and vinegar. Pour these things into the base of the washer and let them sit there for 15 minutes. Then run the washer on its hottest setting.

You can also try snaking the drainpipe to remove any physical blockages further down the line.

For the most part, you should be able to get rid of a putrefying smell by yourself. If, however, you have tried all the above techniques and you are not coming right, call in a plumber and ask for their help.

Prevention is very easy. Just scrape or rinse your dishes before loading them, and clean out the filter regularly.

2. A Sulfur Smell Can Come From a Dishwasher

Sulfur smells are like the smells coming from rotten eggs, skunks, and some natural gases. It’s the smell that would make you look suspiciously at the other people in the kitchen, wondering who just “cut the cheese”.

While they can build up slowly (you might start by looking suspiciously at the other people in the kitchen, wondering who just “cut the cheese”), after a while, you won’t mistake it for a bodily emission—it can get really potent.

You will likely smell it most strongly when opening the dishwasher door.

Sulfur smells can be caused by a few different things. These things include:

The door gasket is the rubber part that lines the door to your dishwasher. This gasket gives the door its watertight seal. But, because of its material and how it is somewhat flexible, sulfur smells can come from here as well.

Pieces of food can get trapped in between the gasket and the door and create the sulfur smell. This is because certain bacteria give off hydrogen sulfide gas as they break down food.

The smell of rubber is somewhat close to the smell of sulfur, so food trapped here may start smelling like sulfur faster than if it were caught in other places.

Bacteria in drains can also cause the sulfur smell, which is associated with sewer gas.

When a drain is blocked, then this gas cannot be pulled into the plumbing vents and eliminated outside the house. The smell will, instead, escape into the house.

Another way that this gas can enter the house is if the building envelope is very weathertight or if there is a lack of makeup air.

Exhaust systems in the home, including kitchen range hoods, remove air from a space. This air needs to be replaced, or else a negative pressure system is created indoors, which causes a host of problems, one of which is that air is pulled from potentially inappropriate sources, like your drainpipes.

If a house is not weathertight, the air may be pulled in from outside through all the natural cracks and gaps that exist. This is not necessarily a problem, although it can create drafts and make the HVAC system less effective.

With weathertight houses, the air can’t enter in this way. The problem can be solved by installing a makeup air unit that brings in air to replace that which is exhausted. However, without this, the source of replacement air may be your drains, including your dishwasher drain.

As mentioned, the sulfur comes from bacteria, which you are then exposed to.

However, sulfur smells are easily detectable by humans, so when you start smelling it, you are not yet exposed to high enough concentrations for negative health effects to occur.

If you ignore the smell, putting off addressing the issue, then potentially toxic concentrations can be reached.

The fix for a blocked drain was described in the solutions and prevention section of the first common dishwasher smell.

Should that solution fail to work, then a professional might be needed to take a look at the drain.

If the problem seems to be coming from the gasket on the door, running the washer on a hot setting and then scrubbing the gasket should most likely solve that problem.

If it doesn’t after multiple tries, then replacing the gasket might be necessary. Luckily a professional won’t be needed for this! Just follow these steps: 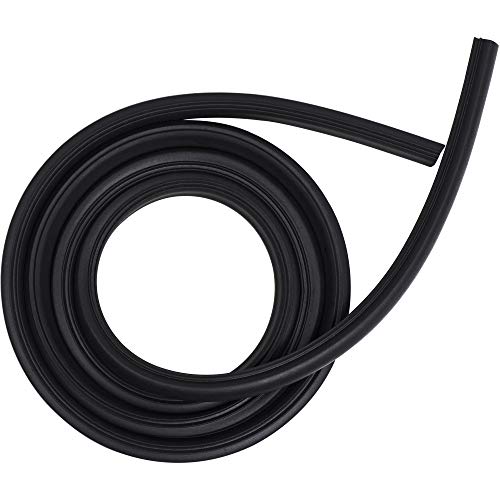 If the sulfur smell is being caused by a weathertight house and/or a lack of makeup air, there are a few solutions that can be offered:

If these solutions are tried, and the sulfur smell persists, and the smell isn’t coming from food or anything else in the dishwasher, a professional might need to be contacted.

Prevention includes scraping/rinsing plates so that nothing can block the drain or get trapped by the gasket. You also need to make sure your exhaust systems are being matched by incoming air.

3. Dishwashers Can Develop a Musty Odor

Musty odors are normally ones that are stale and damp, and are commonly associated with the smell of mold or mildew. When I think of musty smells I think of my grandparents’ unfinished limestone basement!

This smell can be rather subtle, so it may not be noticeable until it is quite strong. When coming from the dishwasher, it would be most noticeable the closer you are to it and if the door is open.

Musty odors in your dishwasher could be caused by the following things:

A dishwasher that is never allowed to air out will develop musty smells for the same reasons as the blocked drain.

A filter that is never cleaned will also lead to musty smells, even if water is draining properly. This is because the filter itself will stay warm and damp longer than the machine will. And because it’s trapping food, it also promotes mold and mildew growth, and, thus, the smell.

A generally dirty machine will cause the musty smell for the same reasons as the dirty filter.

While the musty smell itself isn’t particularly dangerous, what is causing it might be.

Musty smells caused by mold are particularly dangerous because you can inhale the mold spores or even ingest them if they are on “clean” plates.

Mold spores can negatively affect your respiratory system, eyes, nose, and skin when in contact with these areas.

The dangers of ingesting mold depend on how much and what type of mold it is, so if you know you have ingested them, then it is perhaps best to contact your healthcare provider for advice.

Another danger with mold is its potential to spread. If it’s growing in your dishwasher, it’s just a matter of time before it starts growing in the other parts of your kitchen, including the sink area and dark cabinets. This increases your chance of exposure.

If the problem is a blocked drain, then baking soda and vinegar should be used.

Check everywhere to make sure there are no more visible signs of mold or mildew, including the gasket, filter, and rotating wash arms.

If that doesn’t work, a professional should be contacted.

Cleaning your dishwasher like this once every 4-6 weeks can be a good preventative measure. You should also leave the dishwasher open to dry completely between loads.