A ceiling fan and a table fan both provide effective cooling to people in the path of the airflow. Cooling is achieved via the wind chill effect for both fans.

The main difference (but not the only difference) lies in the size. Table fans are typically much smaller than ceiling fans, which impacts their reach and effectiveness, although it does also make them more affordable.

What is a Ceiling Fan?

A ceiling fan is a fan that is installed or mounted onto the ceiling of a particular room. These fans are powered by electricity and their rotating blades are used to circulate the air in an entire room or space, although the biggest effect will be felt in the areas closest to the fan. 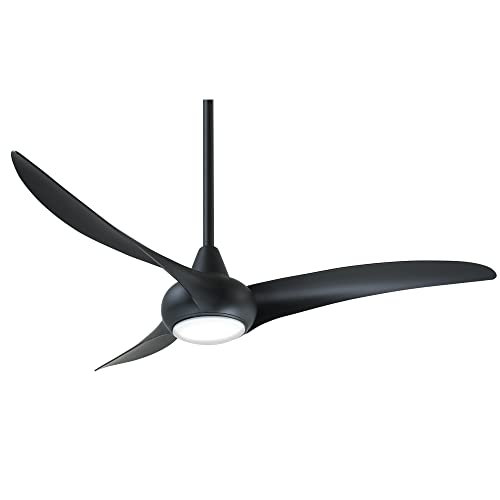 Air surrounds the blades of a stationary ceiling fan. Then, when the blades start moving in summer mode, the highest part of the pitched blade leads, and the air through which the blades are “slicing” is scooped down along the blades and funneled into a column below the fan, which is then forced down. This is the main effect.

There is a secondary effect, which occurs naturally to fill the space created by the air that is forced down. Air is displaced sideways and up from the space below the fan and air is drawn into the blades from the sides of the room to fill what would otherwise become a vacuum above and around the fan.

The air flowing down from the ceiling fan exerts a cooling influence on the people affected by the airflow via wind chill. This is when the heat trapped against skin is blown away. This both removes heat from sitting against the skin and allows more body heat to escape into the air around the skin.

Ceiling fans are extremely efficient at creating airflow in a space, especially in a naturally ventilated room or one where the AC is blowing at the same time.

According to research, it will cost you between $0.0007 and $0.005 an hour to run your ceiling fan, depending on its size. Ceiling fans have such a low wattage that they are quite cost-effective options for cooling a space.

They don’t just use less power; they convert this power into effective airflow, about 287.8 CFM/W, making ceiling fans energy efficient as well. As you will see when we get to table fans, ceiling fans are much more efficient than table fans.

Experts even suggest that the larger your ceiling fan is, the more energy-efficient it will be.

A ceiling fan may be more efficient in cooling down a space, but its installation does require quite a bit of work. It does not necessarily require a professional, but it can take up to about 3 hours of your time to get the job done properly.

Ceiling fans are hard-wired into the house, so you can’t just plug them in. You also have to follow certain rules and guidelines in terms of the junction box you use, how the junction box is attached to the ceiling, and how low or high the fan must hang.

Because you are fixing your ceiling fan into the ceiling and into the wiring at a certain point, it is not a portable cooling unit.

Are Ceiling Fans Obtrusive or Hazardous?

While ceiling fans are noticeably larger than table fans, the space that they occupy is not prime real estate, so you don’t perceive their presence to be as large as it actually is.

An exception would be if you had a small room (although, a retractable ceiling fan can solve this problem) or if your room had a low ceiling (although flush-mount or hugger fans are specifically designed for these spaces).

While unobstructive and generally out of reach, ceiling fans located near tall furniture or steps can become more of a risk for head, hand, and finger injuries, although these are not as common as you would think, and they are easily avoidable through wise placement and behavioral modifications.

Ensuring that the fan is installed to code and is tightly mounted to the ceiling will reduce the risk of it becoming loose and falling off the ceiling, which could cause significant harm to anyone beneath it if it fell.

Installation costs aside, purchasing a ceiling fan can set you back anywhere from $100 to close to $1000, depending on the make, model and size.

Ceiling fans come in a variety of styles, all made of different materials and with additional features and settings. You are sure to find one that can suit your home and budget.

Your average ceiling fan will have a minimum of 3 speed settings, meaning you will be able to adjust the amount of airflow in the room according to your exact preference. DC fans have more speed settings.

Most of your newer ceiling fans come with a remote control that allows you to select your desired speed, and turn the fan off and on. Some of the latest models even have an app that you can download on your smartphone.

A great benefit of ceiling fans is that they come with light fixtures attached, so you won’t be compromising light and visibility in a space for the sake of airflow.

Ceiling fans typically also come with a summer and a winter mode, which affects how the air is circulated around the room.

What is a Table Fan?

A tale fan is a smaller electrical appliance that can be placed on any flat surface such as tables, countertops or even the floor. These fans do not come with a pedestal. To exert the cooling effect in the area required, they need to be placed onto tables, hence the name. 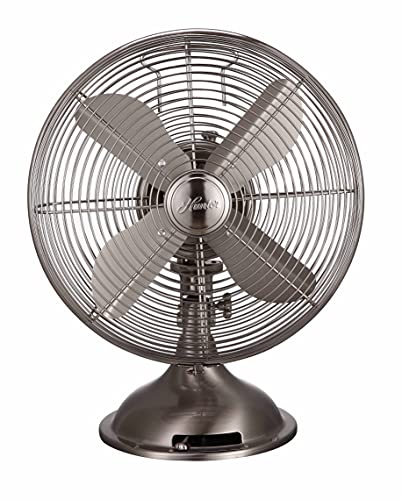 Mechanically, table fans and ceiling fans work the same way. Electricity causes the blades to spin and the blades scoop air into a column to be blown in a certain direction. The difference with table fans is the direction of airflow.

Table fan blades are situated perpendicular to the floor as opposed to parallel. This means that air is being forced out into the room horizontally and air is drawn into the fan from behind as opposed to above and to the side.

Table fans also work on the principle of wind chill to cool the occupants of the room.

Despite its size, a table fan uses more electricity than a ceiling fan (around 0.0429 kW per hour), costing closer to $0.006 per hour to run.

In addition to costing more to run, the amount of airflow generated with the power it uses is not as great as that of a ceiling fan, and the effects are limited to those in the direct path of the fan, making a table fan less energy-efficient.

Table fans are more suited for individual use than room-wide use.

The great thing about table fans is they require absolutely no installation. Simply plug it into the wall and enjoy.

With no installation, comes greater freedom and portability. You will be able to take your table fan wherever you see fit; as long as there is a plug point you are good to go! Add in an extension cord if you want to place it close enough to you but the plug point is too far.

Some table fans can be quite heavy, but most are really easy to carry, which means you are really not limited to where you can take them.

Are Table Fans Obtrusive or Hazardous?

When it comes to how “in the way” a fan is, table fans come off worse than ceiling fans, especially in small spaces where floor and surface area are limited. You also have to find a place to store the fan while it is not in use, which uses up storage space.

Table fans pose a risk because of the wires that run along the ground between the outlet and wherever the fan is sitting. People can trip over these if they don’t know they are there. Make sure to keep these as neatly tucked away as possible to avoid any accidents and also never stretch the cord so far that it is raised like an actual trip wire.

Since these fans can be placed literally everywhere, that means the chance of your little ones being able to reach them is a lot higher. Rotating blades are a big no-no for curious little fingers.

You also run the risk of knocking into them as you and your guests move through spaces, which means not only are you in danger of injuring yourself, but you can also cause damage to the appliance itself.

While table fans may cost you slightly more to run each month, their upfront cost is significantly lower than that of a ceiling fan.

You can buy a table fan for as little as $20, although the larger and more powerful ones will reach closer to the $80-100 mark.

Like a ceiling fan, most table fans come with the option of different speed settings, although most have a maximum of 3 speeds.

Table fans can also often provide the added feature of rotating/oscillating the head of the fan, either automatically and continuously, or you can position it in your desired direction.

Newer table fans also come with a remote control, so you won’t have to physically get up and adjust the settings of the fan manually. However, the number of remote-controlled models is much lower compared to ceiling fans.

Table of Differences Between Ceiling and Table Fans

Should I Get a Ceiling or Table Fan?

Making the choice between a ceiling fan or a table fan should come down to what your desired outcome is because both table fans and ceiling fans have a list of pros and cons.

If you are on a budget but you want to have cooling capabilities in any room you move to, then opt for a table fan and tote it with you from room to room. Table fans are also ideal when you only require a fan for a few weeks each year.

I live in a hot climate, and ceiling fans are glorious additions to bedrooms and living spaces. Here, if you have a ceiling fan, it’s running nigh on continuously with no regrets. Ceiling fans are also better if you share a space with other people because they have a wider reach.