When looking for a ceiling fan, you may come across the terms flush mount and hugger ceiling fan. It may come as a surprise that these terms refer to the same ceiling fan installation style.

Although these terms are used to describe the same thing, in this article, I will go into some of the interesting details of the ‘why’ behind using two different names.

Flush mount and hugger ceiling fans both refer to the installation style of attaching the fan directly to the ceiling. Different brands tend to pick one term to use based on marketing strategies. If a fan can be installed flush or via downrod, it is flush mount. Hugger fans can only be attached directly.

Flush Mount and Hugger Ceiling Fans Are the Same

The alternative would be a downrod ceiling fan, which is attached to the ceiling through a metal tube called the downrod, which is how this style of installation gets its name.

There are a couple of possible reasons why two different terms are used.

This point of differentiation would factor in when trying to install a flush mount fan on a sloped ceiling.

So, this may be one reason for the different terms. However, the most likely reason is manufacturer preference, which explains why one brand will almost exclusively use one term and another brand the other.

For example, Hunter, a very well-known and popular brand, sell flush mount ceiling fans but if you look for a hugger fan, you will not find one because they have opted to use flush mount to describe their fans that sit up against the ceiling.

As it happens, searching their site for hugger ceiling fans actually brings up results for ‘Low Profile’ fans, which is yet another term for these types of installations. 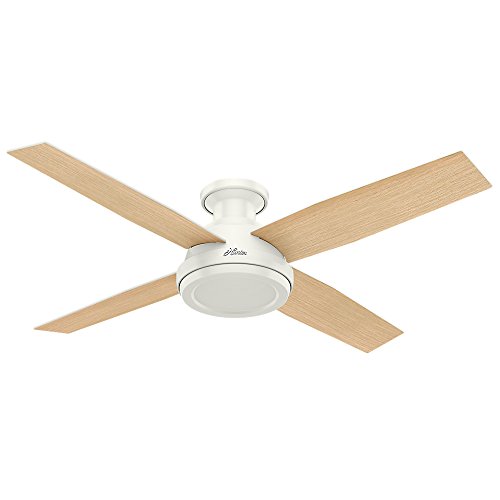 Another reason relating to manufacturer preference could be company marketing strategies, as the term ‘hugger’ sounds cozy and may help convey that a certain fan is suitable for small spaces.

Flush mount or hugger ceiling fans are ideal for rooms with a low ceiling. Because they sit closer to the ceiling, you can still have a ceiling fan installed within the floor clearance parameters (at least 7 ft from the floor).

In addition to adhering to clearances—and, indeed, because you are able to adhere to them—the risk of ceiling fan-related injuries in rooms with lower ceilings is mitigated with flush mount or hugger installations.

Some people don’t like the chandelier look of a downrod installation. Flush mount/hugger fans can look more minimalistic, tidier, and appropriate in smaller spaces.

The most significant limitation of flush mount or hugger ceiling fans is their decreased efficiency. Because they are so close to the ceiling, they aren’t able to circulate as much air as downrod fans.

Fans circulate air by collecting air by scooping it along the blades and pushing it down. Flush mount or hugger fans have less area above them to collect air from, which decreases circulation.

For this reason, these fans shouldn’t be used in rooms with high ceilings, as they won’t produce enough airflow to fill the space.

These fans can also be noisy as they are too close to the ceiling and turbulence is created as air bounces between the fan and the ceiling. This turbulence can cause wobbling or at least greater vibrations, which create noise.

Furthermore, the motor can cause noise because manufacturers may use an inexpensive, less powerful motor to combat the air turbulence. Less powerful motors can be of lower quality and noisier.

For a more comprehensive evaluation of these fans, look at my article on the Pros and Cons of Flush Mount Ceiling Fans.