Before I started looking into getting a new range hood installed, I had never heard of makeup air—let alone a makeup air unit. Of course, that prompted me to dig deeper!

As it turns out, it’s not usually necessary to have a makeup air unit, but when it is, it’s because it can prevent a whole host of issues related to the air pressure in your home. Let’s take a look at exactly how and why that is.

Domestic makeup air units are relatively simple metal units installed in the home and connected to the HVAC system. Their purpose is to bring in fresh air to replace exhausted air in an effort to avoid the effects of negative pressure systems in the home.

Contents show table of contents
What Do Makeup Air Units Do?
Where They Are Installed
They Are Not Always Necessary
Appearance and How They Work
How Do They Look
Air Intake
Air Distribution
Sources
Was this helpful?

What Do Makeup Air Units Do?

Makeup air is air that enters your home to literally “make up for” and replace the air that is removed by various exhaust systems.

This may seem a bit trivial, but it can actually be quite important. Once air leaves your home, negative pressure is created inside the building until/unless that air is replaced.

If this air is not replaced quickly via an air intake (an open window or, of course, a makeup air unit), then air will instead be pulled in through various gaps and spaces in your home’s construction.

This can include the spaces around your windows and doors, creating uncomfortable draftiness throughout the home. It can also include your vents, meaning that air is pulled in through spaces it is meant to leave.

Altogether, this is fairly undesirable. Not only is it physically uncomfortable to sit around in drafty rooms, but it can even be dangerous if your home is pulling in carbon monoxide byproducts from certain appliances that are meant to be vented.

Pulling unconditioned air in from the outdoors can also drive up costs for your heating or cooling.

Where They Are Installed

Domestic makeup air units tend to be installed at the top of a building and connect to rooms with appliances that exhaust a large amount of air and/or produce a significant amount of gas byproduct.

If you have a fuel-based furnace or stove, it is likely you need a makeup air unit to bring air back in after the range hood or furnace vent has exhausted large quantities of it and/or to dilute any harmful byproducts in the home.

This helps to ensure both safety and comfort since it prevents the inhalation of harmful materials and it minimizes draftiness.

Although domestic makeup units are technically only necessary for rooms with high-output exhausts, they actually connect to the entirety of your home via the central ductwork of your HVAC system, and to the outdoors as well.

This is due to the manner in which they function, enabling them to complete said function effectively with minimal strain on your heating and cooling. I will explain how this works more in depth in a moment.

They Are Not Always Necessary

Makeup air units are not exactly required—not unless you have an appliance that burns fuel (liquid, solid, or gas) and exhausts interfere with the function of these appliances.

With that said, there are several factors that may influence whether or not a makeup air unit would be beneficial for your home.

For example, a range hood below 400 CFM may still cause the pressure in your home to drop to a level where you see negative side effects from not having a makeup air unit.

These effects can be exacerbated if you have a small kitchen or home, since there is less air available to be exhausted from a small space in the first place.

In a scenario like this, you may still see value in a makeup air unit, although it may not be required by the IRC or your local code.

Appearance and How They Work

How Do They Look

A makeup air unit or system is simply a device that enables the intake of air. Since this is its function, its form or appearance is fairly standard. Of course, their appearance may vary slightly from brand to brand, but I will briefly cover the shared basics.

Domestic makeup air units are large, metallic, rectangular devices that are usually installed within the attic of a home. 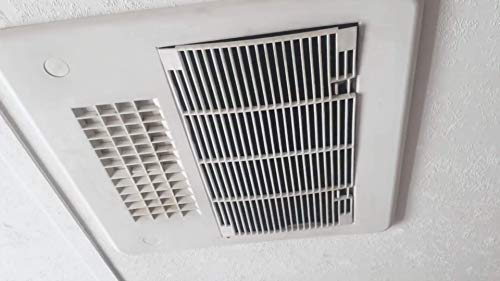 These units have several sections where they are meant to be connected to your home’s central ductwork, and to the outdoors.

Two of these connection points are located on either end of the device, allowing it to be looped into the ductwork, while another connection point allows the unit to connect to the outdoors via another duct.

Although not visible, these units also contain dampers that control their intake of air.

As mentioned before, the makeup air unit connects to the central ducts of your HVAC system.

Makeup air units are automated; when a drop in air pressure is sensed within your home, the damper(s) within the unit opens to allow a set amount of air into your ductwork in order to replace what was exhausted.

From this point, the makeup air travels through the connecting ductwork to the central ductwork, where it mixes in with and is tempered by the air that has already been heated or cooled by your HVAC system.

Once this makeup air has merged with the air that is already within your ductwork, it simply becomes part of your home’s air system and travels with it.

This new, “makeup” air is pulled into any low-pressure areas until the air pressure throughout your home is regulated.

If more air is exhausted, then the cycle will repeat, and as more air is pushed out of your home, more air will be pulled into the same space.