Dryer booster fans are freely available from most hardware supply stores and they are designed to augment the airflow efficiency in a dryer duct system. This all sounds great, except that booster fans are against building codes.

There is good reason for prohibiting booster fans in dryer ductwork; reasons linked to the safety and health of the houses’ occupants.

Dryer booster fans help expel air, moisture, and lint through long ducts. But they may fail without detection, creating the risk of moisture damage, mold, and lint fires. Lint can accumulate on the fan, increasing fire risk or causing it to fail. Booster fans aren’t permitted by the IRC for these reasons.

Contents show table of contents
What Do Dryer Booster Fans Do?
Safety Concerns with Booster Fans
You Won’t Realize That They Have Failed
Another Surface on Which Lint Can Accumulate
Booster Fans Against International Residential Code
Sources
Was this helpful?

What Do Dryer Booster Fans Do?

A flow-through booster fan is typically installed at a certain point in the dryer’s exhaust ducting to “boost” the airflow through a duct.

They are installed when the dryer does not expel the air with sufficient force to ensure the hot air, moisture, and lint is expelled out of the duct.

Insufficient airflow through the duct will result in excessive moisture and lint settling inside it, where it will gather and pose a safety risk.

Booster fans can reduce the risk of insufficient exhaust duct airflow and the associated problems. 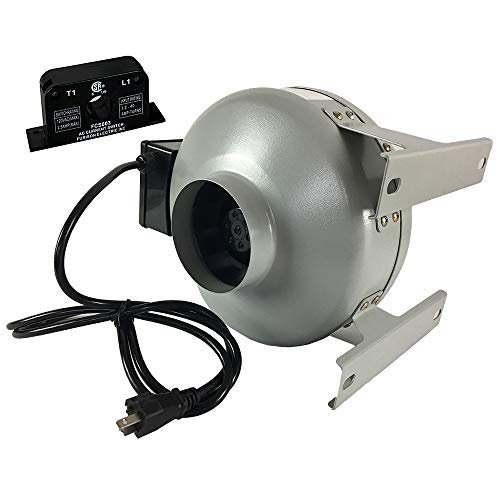 So, on the face of it, these devices seem like they are beneficial, but there are certain safety concerns linked to their use and these are likely the reasons why the IRC has prohibited them from being installed in residential dryer ducts.

You Won’t Realize That They Have Failed

When you rely on a booster fan to effectively vent your dryer, then if this fan fails, you suffer the effects of insufficient exhausting of dryer air.

If you know your booster fan has failed, then you can simply avoid using the dryer until it’s repaired or replaced. However, there is a chance, particularly with older models, that you will not notice that the fan has stopped working until you see the negative consequences.

Furthermore, when the booster fan fails, the fan itself can become an obstruction in the duct, making airflow even more inefficient.

The following are some of the consequences of a failed booster fan.

Dryers give off a lot of moisture during the drying process. Moisture collects inside the duct when the airflow is insufficient to expel the moist air and lint. The moisture accumulates in any low-lying areas of the duct and can leak out.

Water dripping from a duct could easily find its way into an electrical plug point. A significant risk of electrocution exists if anyone comes into contact with the electrically charged water.

Water dripping out of a dryer duct can form a water puddle anywhere under the duct. The water can also run back along the duct into the dryer, which will find its way onto the floor.

An unsuspecting person walking into the puddle can easily slip and fall, causing potentially serious injury.

A hidden water leak stemming from a dripping dryer duct can cause significant damage to floors, walls, and ceilings. Water can penetrate and damage a lot of materials.

Given enough time, wood exposed to water will start decomposing. Drywalling is also no match against consistent moisture exposure and will swell and collapse. Cement walls and even unsealed tiled areas will eventually degrade and need to be repaired or replaced.

If the leak goes unnoticed and is left unattended for long enough, the result can be catastrophic. Walls can become structurally compromised, making them unsafe. Ceilings can cave in, and wooden flooring can collapse or be permanently damaged.

Mold grows particularly well in warm, moist, and dark conditions like those found inside dryer ducts that cannot move air properly. Lint and moisture that accumulates inside the dryer ducts due to insufficient airflow create the perfect conditions for mold growth.

When moisture and lint collect inside the duct, they form a wet blanket-like coating that retains moisture very well. Mold quickly develops on this layer and thrives for as long as the growing conditions are favorable.

Mold can, of course, also grow in any area of the home, such as walls, floors, inside cupboards, and ceilings. As long as moisture is present, mold is likely to set in. Once it starts growing in one spot, spores are released and carried to other spots, and this is how your moldy ducts can lead to a moldy house.

The risk of a dryer fire occurring increases significantly when a booster fan malfunctions. Lint given off by the clothes during the drying process cannot escape the dryer duct as quickly as it should, and it accumulates in these tubes that are consistently exposed to high temperatures.

When the air can’t escape freely, the lint, moisture, and hot air build up inside the dryer and are expelled through any tiny crevice it can find. More often than not, the lint settles on the electrical components of the dryer.

These components include the heating element and other parts that rely on air circulation to cool down. When sufficient lint blankets these parts, they can overheat and, in some cases, ignite the highly flammable lint, with disastrous consequences.

Should a fire start, a booster fan can draw the fire into the duct igniting the lint inside the duct, exacerbating the situation and spreading the fire throughout the house (this is why you have to use the correct dryer ducting materials!).

Another Surface on Which Lint Can Accumulate

Whether broken or functioning, a booster fan is another surface on which lint can accumulate, leading to all the fire-related consequences that we have just gone over.

But in addition to this, accumulating lint can actually be what compromises the functioning of the booster fan over time. These fine particles catch on the fan’s blades, causing them to jam, or they can get into the motor, reduce its efficiency, and increase its operating temperature, even to the point of failure.

In extreme cases, clumps of compacted lint could be dislodged from the duct walls and become stuck in the fan blades. When the booster fan no longer works as it should, the system becomes inefficient and very quickly becomes a significant fire risk.

“Domestic booster fans shall not be installed in dryer exhaust systems.”

Most American states adopt the IRC and codes become equivalent to laws. Some local authorities do not carry all of the regulations over to their codes, which do take precedence. However, if your local codes allow booster pumps, please still take into consideration the fact that they were considered unsuitable and dangerous enough for the clause to be included in the international regulations.

A better solution than a booster fan would be to simply run a shorter duct system. If you can’t, then why not investigate ventless dryers? Ventless dryers are a worthwhile consideration as they don’t use ducts at all, are perfectly legal, dry clothes very well, and are easy to use.