Screens at the terminal vent of dryer ducts are against code. They catch lint, preventing it from being effectively removed from the ducts and dryer. Lint build-up reduces airflow and the dryer’s efficiency, trapping moisture, heat, and more lint. Ultimately, screens increase the risk of lint-related fires.

Vent screens are proposed as a way of keeping bugs and large debris out of our ventilation systems. These small mesh accessories are easy to install and serve and stop occurrences like wasps flying out of your bathroom fan when you’re in there, vulnerable and stuck. But if you have a mesh on your dryer vent terminal, you have to take it off.

There are very specific and very official reasons why dryer vents should not be covered with screens, and they revolve around efficiency and safety.

Dryer Vent Screens Are Against Code

Dryer ducts run from your dryer and terminate outside (or at least they should!). As these ducts are relatively large, often four” and more in diameter, they offer an ideal route for pests to enter your house.

As mentioned, in other ventilation systems, the solution to this is to install a screen over the terminal vent. For dryers, doing so is a building code violation.

Most homes in the USA are governed by the International Residential Code (IRC) or an adaptation thereof.

According to Section M1502.3 of the IRC, which covers clothes dryer exhaust systems:

“Screens shall not be installed at the duct termination.”

We need to abide by these codes because they are legally enforceable but more than that, they exist to ensure the safety of all who reside in the homes governed by this code (one- and two-family dwellings). Basically, the reason why dryer vents are not allowed to be screened is that exhausted dryer air contains lint.

Dryers function by blowing heated air into a drum, which turns and “tumbles” the clothing to facilitate a relatively even rate of moisture removal from the materials. While vital to the function of a dryer, the agitation of clothing in the drum rubs materials together and causes small fibers to break off. This is lint.

Dryers have a lint filter but it generally only catches about 30% of the lint generated. The rest remains suspended in the hot air and is exhausted.

Lint filters for domestic dryers are usually found in the dryer’s door, and it is recommended that the filter is cleaned after every use to ensure that the percentage of filtered lint does not fall even lower.

Lint Will Get Caught in the Screen

Fitting a screen to the end of the dryer duct is not a good idea. The screen acts as a second filter—even if it has pretty large holes—which catches lint, creating a build-up rather quickly.

The lint build-up obstructs the free flow of air from the dryer, reducing the appliance’s efficiency and causing a variety of problems that compromise the health and safety of those living in that home.

To minimize the negative effects, a screen would need to be removed and cleaned very often. However, it’s not always easy to do, and it’s easy to forget to clean the screen. The powers that be deem it safer to just prohibit the screens entirely.

The code does require a backdraft damper to be installed, however, so removing the screen will not open up a bug freeway into your home. 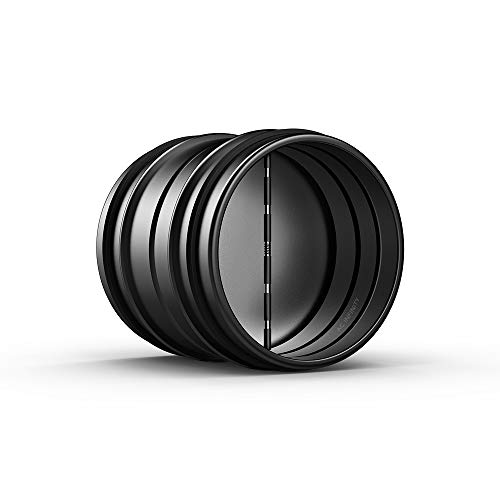 Lint is tiny and clings easily to virtually all surfaces due to static or friction (getting caught on tiny projections, even on seemingly smooth surfaces).

When lint builds up inside the dryer’s exhaust duct, it causes a chain reaction where lint trapped inside the vent attracts more lint, and so it builds up.

At the screen, this build-up reduces the net free ventilating area, i.e., the hole through which air can exit to the outdoors gets smaller.

As this area becomes smaller, more lint is trapped inside the exhaust duct, where it can accumulate and reduce the duct’s functional diameter and create obstacles, thereby diminishing airflow velocity and effective ventilation.

If dryer exhaust cannot be effectively removed, then heat builds inside the dryer, causing it to overheat. Moisture levels also rise, so clothes can’t be dried as quickly.

This is quite a sizeable effect for such tiny particles, but the ripple effect expands even further.

Evaporated moisture in the ducts will eventually condense if it cannot leave the duct fast enough. Water droplets catch even more lint, perpetuating the problem. But water in the ducts also has other negative consequences.

Firstly, the standing water can eventually cause the ducts to corrode.

Secondly, the water may find its way back through the ducts and dribble into your dryer where it can cause all manner of havoc, like rust and short-circuiting electrics. It can even spill out onto your floor, making a mess and creating a slip hazard.

Thirdly, where there is moisture and heat, there is the possibility of fungal growth. If you have mold growing in your dryer duct, then spores can find their way back into the house (with the leaking water, for example). I need not tell you the health risks associated with mold!

Now we come to the part that I’m sure you have been expecting. Whenever I hear about dryer lint, or specifically dryer lint accumulation, my mind goes immediately to the risk of fire.

Lint fibers are highly flammable. You know that clothing is flammable. Now make it extra dry, highly transportable (it’s so small that it moves and spreads easily), and increase the surface area and you get lint—the gunpowder of the laundry.

Add heat, which is abundant with dryers, to the presence of accumulations of these flammable fibers and your risk of fire increases.

Before you start to panic, though, a normally functioning dryer should not reach temperatures high enough to ignite lint—there is no way manufacturers would get such a device past any of the boards that certify them.

When you install a screen, however, you increase the amount of both fire-starting factors: lint and heat.

When the airflow through the dryer is restricted due to a compromised exhaust duct, the internal operating temperature of the dryer as a whole increases significantly. The greatest risk is when lint accumulates on electrical components, including the heating element.

This can all be prevented, though. Just empty the lint filter after every cycle, clean the ducts out every year, remove the lint from all dryer components every two years, and, of course, remove that screen from the dryer vent!