If you are asking if duct tape is conductive, you are probably wondering if it is suitable as a substitute for electrical tape. When it comes to the wiring in your house, it certainly pays to be cautious, so it’s a good question to ask.

In the end, the appropriateness of duct tape for electrical work relies on more than just how conductive it is.

Duct tape is non-conductive but not as insulating as electrical tape. Higher voltages can be transferred through duct tape. It’s hard to work with in small spaces and around small connections, leaves behind a sticky residue, and is not sufficiently heat-resistant. It can’t be used instead of electrical tape.

Duct Tape Is Made From Non-Conductive Materials

If a material is conductive, it transfers things like heat and/or electricity.

Conductive materials usually have free electrons in their molecular structure, which allows the transfer of heat and electricity.

For example, metals are conductive and, thus, transfer electricity easily.

Materials that are not conductive are known as insulators and include materials such as plastic and rubber.

These materials do not have free electrons in their molecular structures and, therefore, do not allow electricity to pass through them.

The duct tape that you will most commonly find on the market is made of fabric mesh covered in a polyethylene coating with a rubber adhesive.

These materials do not conduct electricity well, so overall, duct tape is a poor conductor.

While, in general, duct tape isn’t a good conductor, it isn’t a good enough insulator to protect you from shock if it were taped over electrical wires because it can still let higher voltages through.

Electrical tape, on the other hand, is comprised of highly non-conductive materials, such as rubber, PVC vinyl, or rubberized cloth. All such materials are designed to protect you from higher voltages.

Being non-conductive does not make a tape an appropriate substitute for electrical tape. In addition to this, the tape also has to:

We now know that duct tape is made of three layers: polyethylene coating, fabric mesh, and glue-like rubber adhesive.

The fabric part of the duct tape grants it durability and makes it very strong.

More often than not, wiring will be in hard-to-reach places, and you will probably need to wind the tape around very small wires.

Duct tape does not fit the bill in this regard because it is not as flexible and easy to manipulate as electrical tape.

There are usually two layers in electrical tape, with the upper layer typically made of a type of plastic, polyvinyl chloride (PVC), and the bottom layer made of adhesive consisting of rubber.

The PVC is much easier to manipulate than the fabric fibers in duct tape, so electrical tape is easier to stretch and stick tightly around cables.

A good way to understand the differences between the two materials is to compare wrapping a bandage around a stick compared to using a more flexible plastic material such as cling-wrap.

I’m sure it won’t take much imagination to realize that cling-wrap will be much easier to wrap than an equivalent amount of fabric bandaging.

Residue Is Left Behind

Both duct tape and electrical tape have a rubber-based adhesive that makes the tapes sticky.

If or when tape is removed from a surface to which it has been stuck, some of the glue-like rubber adhesive may be left behind as the van der Waals forces keep some of the adhesive stuck.

This means that a sticky residue is left behind.

There is likely to be a residue when both duct tape and electrical tape are removed from surfaces.

However, since duct tape is designed to keep objects of various materials stuck firmly together, there is a thicker layer of rubber-based adhesive on its underside.

In contrast, electrical tape has a much thinner layer of rubber-based adhesive.

This means that electrical tape won’t be as good as duct tape in keeping things stuck together, but it won’t leave nearly as much residue as duct tape when it is removed.

Hence, duct tape is not a good substitute for electrical tape, because if it is removed from wires, it will leave behind residue that will make wires stick together in a way that can become dangerous.

In addition, the residue can collect dust and perhaps even flammable fibers from clothing or wood, such that a spark might cause problems.

If the wires are stuck together, it is very difficult to maintain cables and connections, and this is not safe.

Duct tape is quite resistant to heat.

It can withstand temperatures up to 200 ºF, though the adhesive will start to lose function around 140 ºF, becoming less sticky and, therefore, less effective.

At temperatures higher than 200 ºF, duct tape may start to melt.

The polyethylene coating in duct tape means that it is resistant to fire and should not ignite.

However, duct tape does often consist of fabric, and this may add a flammable aspect to the tape in extreme situations.

Electrical tape is very heat resistant, and will also withstand temperatures around 200 ºF. 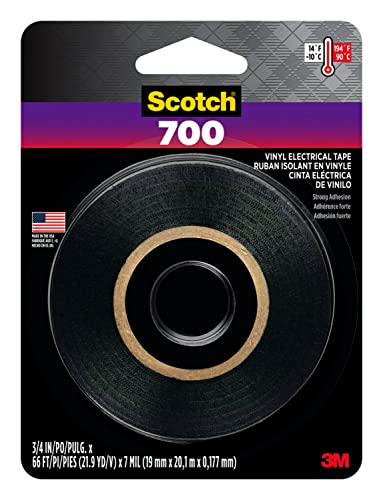 At about 176 ºF, electrical tape may start to melt and lose shape and function, though some electrical tapes can be made of rubber and should not melt until temperatures reach 221 ºF.

Since it is made from plastic, there isn’t a high risk of PVC electrical tape igniting even if temperatures become high enough for it to melt.

Furthermore, despite its similar heat resistance, duct tape does not fit the other requirements to act as a suitable substitute for electrical tape.

In this case, it is best to reserve tapes for the functions for which they are designed.