All those videos of people slapping a length of duct tape over gushing holes in water tanks or above-ground pools are strangely transfixing—they are to me, anyway. Yet, the immediate cessation of the flow of water is misleading in that the repair will almost certainly fail within a short amount of time.

Yes, duct tape has its limits, particularly where water is involved. Knowing the limits and how to use duct tape to its fullest extent is crucial in making appropriate repairs with it. While water and duct tape don’t work well together, duct tape can still be a useful tool in fixing water leaks, even if only temporarily.

Duct tape does not function well when exposed to water. It may hold a leak temporarily but the patch will not be effective for very long. How long it lasts depends on the size and pressure of the leak, the type and dryness of the surface to which the tape is applied, and how well it is applied.

Contents show table of contents
Duct Tape Is Not a Permanent Leak Repair Solution
Factors Affecting Success of Temporary Leak Repair
Pressure of the Leak
Size of the Leak
What Surface You Are Sticking the Tape To
Can You Dry the Surfaces Before Applying the Tape?
How Well It Is Applied
How Long You Need It to Hold
Sources
Was this helpful?

Duct Tape Is Not a Permanent Leak Repair Solution

While duct tape (amazon link) is water-resistant, it is not waterproof, and as such, it cannot be a permanent repair for a leak.

Duct tape used to repair a leak will fail, and it is only a matter of time. This means that it can be an effective temporary fix but it will have to be replaced regularly until/unless more permanent repairs are done. 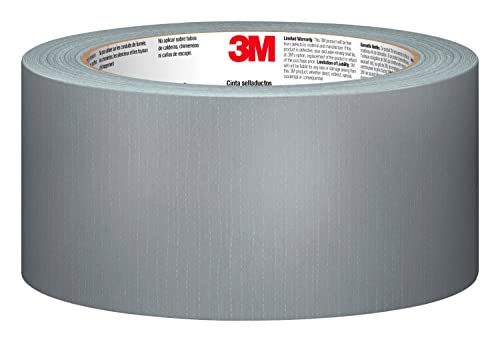 Just how long the duct tape will last depends on factors that will be discussed below.

Using duct tape and thinking it has solved the problem will lead to a false sense of security and potentially greater costs.

If it is assumed that the problem has been fixed, then it won’t be checked. In the case of a leaking kitchen faucet, this will be noticed. But if it is a patch to the pipes inside the wall, then you may only find out about the failure when your walls start swelling or developing an ugly stain.

I remember when I was younger, a friend’s family used duct tape to repair a leak in a pipe in their basement. After a week of checking the tape, they stopped checking because there was no sign the tape would fail.

They didn’t check again until three weeks later, and because of the location of the pipe, the leak had gone unnoticed. It was predicted that the pipe leaked freely for about two weeks before being caught. Their entire basement had to be redone!

Various factors can impact how long duct tape will last as a temporary fix. While these factors are listed independently, most times, more than one of these will play a role in how long the tape will last.

Pressure of the Leak

The pressure at which the water is leaking is one of the most pertinent factors in estimating how long the tape will last in patching the leak.

To make this clear, imagine a pressure washer that has a nozzle that drips water now and then compared to when it is being used at full force. The leak from the nozzle that just drips will most likely be patched easily and will last a while.

However, trying to cover the nozzle while it is shooting water at its full force will shred the tape, and it may as well be like there was no tape there at all.

In the case of pressure, the size of the leak is also a relevant factor.

Size of the Leak

The larger the size of the leak, the less time duct tape will be a sufficient repair.

Smaller holes can be covered by one strip of tape with enough of the tape sticking to the surface around the hole to make it a relatively secure attachment.

Larger holes may span almost the entire width of the duct tape strip, which means that the top and bottom edges are barely in contact with the surface around the hole. These edges readily peel off as a result of the water finding its way under the tape.

Furthermore, even larger holes may require overlapping two strips of duct tape, which also results in a weaker repair.

What can further affect the stability of repairs, particularly with larger holes, is the surface to which you are sticking the duct tape.

What Surface You Are Sticking the Tape To

The surface on which the duct tape is used is an important factor to consider when guessing how long a fix will last in addition to but also regardless of other factors.

Duct tape sticks better to smooth, flat surfaces. This is because more of the adhesive can stick to the surface. When a surface is bumpy or rough, only the peaks of the surface contact the tape’s adhesive.

In the case of a surface that moves or bends a lot, the adhesive can be worn down and rubbed off. Similar to how you remove poster putty from a wall (by rubbing and rolling it so it peels off easily).

The more contact the adhesive has to the surface it is stuck to, the better, and the longer it will remain stuck to the surface. The less adhesive in contact with the surface, the weaker the overall grip between the two.

Of course, if the surface itself is wet, the smoothness of the surface doesn’t matter as much because there is a lubricant barrier between the adhesive and the surface.

Can You Dry the Surfaces Before Applying the Tape?

Being able to dry the surface that the tape will be applied to will help the tape stick longer and make a better seal than tape that is applied to a wet surface.

A wet surface makes it harder for the tape to stick because water gets in between the adhesive and the surface it is meant to be in contact with. Obviously, less contact means that it will peel off more readily.

Being able to dry the surface can increase the lifespan of the tape from days to weeks or months (again, depending on some of the other variables discussed here).

Drying the surface is also important for helping the tape make a good seal around the hole. If the seal is poor, then things like dust and debris could get under the tape, reducing its stickiness and how long it will remain stuck to the surface.

How Well It Is Applied

How well the duct tape is applied is one of the most important factors that go into patching the leak.

The tape mustn’t be making contact with anything other than what it is being applied to. Every time the tape touches something and is removed, the tackiness of the adhesive becomes more and more compromised.

This means that it will not be able to stick as well.

I think everyone has experienced ripping off a piece of tape to lay down carefully only to have to contend with it sticking to itself or a random surface. After finally peeling it free it is quite clear that the tape isn’t nearly as sticky as it is when it is first taken off the roll.

It is also important that the tape covers the entire hole. If it doesn’t, then for starters, the leak won’t be patched. Secondly, the tape will start to peel off because the water is putting more pressure on one part of the tape.

If the edges of the tape are not flush, dust and debris may be able to get under the tape and reduce its stickiness. When the edges aren’t flush, the tape is also more likely to start peeling and coming unstuck from the surface.

How Long You Need It to Hold

Duct tape is not meant to be used with water and leaks, and while it is water resistant, it is not waterproof. This simply means that when used along with water, it will fail. And the longer this exposure to water is, the more likely it is to fail.

If you are expecting your patch to hold for a few days (depending on the circumstances) this is most likely feasible and a reasonable expectation of the tape. But once those expectations hit weeks and months, you start hitting a danger zone of that tape failing.

Expectations alone though are not enough for estimates about how long the tape will last. The fewer factors that are considered when deciding how long you need the tape to hold, the more likely that patch won’t be successful or meet your expectations.