Gas fireplaces are meant to heat your home, but due to their connection to the outdoors (to protect you from smoke and particles), they may sometimes have the opposite effect. Drafts can enter through openings in fireplaces or be pulled in from other house openings due to escaping air through the chimney.

There are many options available to aid in blocking drafts, including products you can purchase or actions you can take, each with different pros and cons.

To eliminate the draft from a gas fireplace, block the chimney by closing the dampers or with chimney balloons, chimney sheep, or chimellas. Alternatively, block the fireplace with fireplace doors, blankets, or guards. Sealing cracks and gaps in and around the fireplace will also help.

Sometimes gas fireplaces are installed to replace traditional fireplaces that have chimneys. Your gas fireplace may or may not vent through that chimney. This will determine whether you can close dampers permanently or only when the fireplace isn’t in use.

The main cause of the fireplace draft may simply be that the damper is constantly left open even when it’s not needed.

Carbon monoxide can enter the house if you close the damper during a fire, causing a health risk.

If you’re not sure about the current status of a chimney damper, you can place your hand in the fireplace to feel if there’s a draft (while no fire is present!). If you can feel a draft, the damper is likely open. It’s also possible to look up the chimney for a visual check (if you see a metal plate, the damper is closed).

If it is open, next you can move the damper to the closed position. Different chimneys will have different ways of opening or closing the damper. Some may require rotating a knob; others may require pushing or pulling a lever.

Here’s a video showing how to open and close a modern left-right fireplace damper:

It’s possible that your chimney does not have a damper. In this case, you’ll likely want to purchase other products that block the opening, like chimney balloons (also called pillows) or sheep.

Remember that like dampers, if the fireplace vents through the chimney, you HAVE to remove the blocking products before starting a fire. They can only be put back once all embers have stopped smoking.

A chimney balloon (amazon link) is made of tough plastic to resist tears, last longer, and insulate the chimney block. It gets inflated to fit inside your chimney and block airflow. To remove it, simply deflate and carefully pull it from the chimney.

Before you purchase one, you’ll need to measure to get the correct size to fit your chimney.

A chimney sheep (amazon link) is made of durable wool that can be cut to fit your chimney. It is wedged into the chimney using its handle. Removal only requires pulling it out.

Both the chimney balloon and chimney sheep shouldn’t catch fire if you accidentally forget to take them out (the balloon will shrivel and fall out, while the sheep is fire retardant).

It can be dangerous to use a chimney sheep in a gas log fireplace because raw fuel or gas fumes (such as carbon monoxide) will vent into the home if you don’t remove them during a fire.

Did you know that they actually make ventless gas fireplaces that expel these dangerous byproducts directly into the room? Crazy, right? Needless to say, they are banned in many areas, including Canada.

For a similar product (in terms of ease-of-use) that can be safer in gas fireplaces, try a Chimella (amazon link). Like the balloon, it will burn and fall out if you forget to remove it during a fire, but as with the sheep, it is easily moveable (not requiring inflation).

If the chimney is already effectively blocked, it may not be the source of the draft. In fact, even if the chimney damper is closed, there can still be a draft created from the air movement between the chimney and the house through the fireplace.

This is where blocking the fireplace will come in so that cold air stays in the chimney and doesn’t create negative pressure. Any blocking product should effectively prevent escaping warm house air and intruding cold chimney air drafts.

Fireplace doors (amazon link) are normally made of glass and are both functional and decorative. For gas fireplaces, fireplace doors are preferable to fireplace screens, which are mesh and provide less of a barrier for the fireplace.

Fireplace doors protect the surrounding room from the fire. Specifically for gas fireplaces, they add an extra level of protection against carbon monoxide or other byproducts.

For drafts, fireplace doors are great for increasing energy efficiency. Doors can be opened while the fire is burning to allow heat to fill the room. Once a fire has warmed a room, fireplace doors can be closed to prevent that warm air from escaping through the chimney.

When a fire is not present, the doors serve to block any cold drafts trapped in the chimney from entering the home, and in the summer, prevent air-conditioned air from escaping outside.

In addition to the chimney damper, the fireplace doors create an extra barrier to prevent air movement between the fireplace and the room.

A cheaper and less-permanent alternative to fireplace doors, fireplace blankets (amazon link) are another option for saving energy. 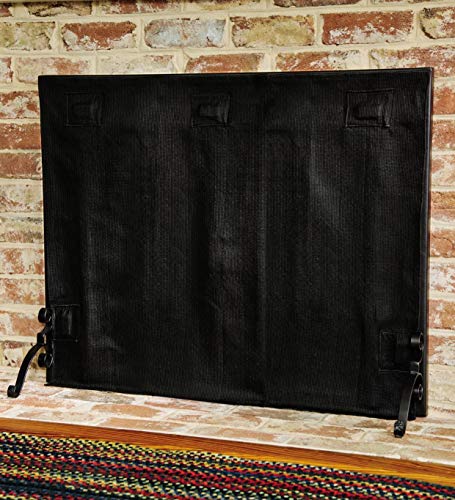 Fireplace blankets are made of fire-resistant material (e.g., flame-resistant carbon fibers) and are also often good thermal barriers. They can attach to your fireplace screen via magnets.

One con of fireplace blankets is that they’re less decorative than fireplace doors. It’s essentially just a black fabric blocking the view of the fireplace, which can look a bit less aesthetically pleasing compared to the glass doors.

You’ll also have to store the fireplace blanket when not in use, rather than having it permanently attached to the fireplace.

Returning to a more decorative option, a fireplace guard(amazon link) or fire screen, is typically a folded mesh, glass, or sheet metal panel placed in front of a fireplace to protect the room from excess heat or particulates. 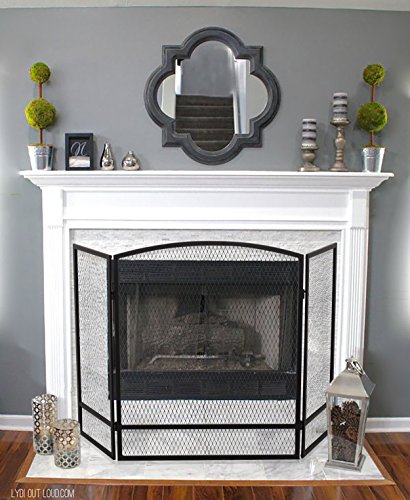 Energy efficiency benefits can vary depending on the design and material of the guard. Generally, though, they can work to prevent air leakage. There’s also the added benefit of decorative elements often found on fireplace screens.

Fireplace guards will be less effective compared to glass doors or fireplace blankets. This is because the guards don’t attach to the fireplace; they’re usually set up in an arch around the fireplace. This allows some air to still flow freely between the fireplace and the room.

If you instead install a fireplace screen that is fitted to the fireplace opening, there’ll be less open-air movement than with a free-standing screen.

Mesh guards especially will provide less of a barrier. However, if you can find glass or sheet metal guards, they can more successfully prevent drafts.

While you’re working on locating issues with the chimney and fireplace, it’s also important to look for cracks and gaps in the areas around the house. Windows, doors, baseboards, and ceilings can be contributing to the draft issue in two ways.

First, when the inside air enters the outside world via the fireplace/chimney, it creates negative pressure. Holes in the surrounding house will bring in air to fill the space left by the other escaping air.

Second, this works in the opposite direction. If air is escaping via the windows, floors, etc., it creates a temperature sink that pulls in air from the gas fireplace more rapidly.

Here’s a video detailing the process:

Once you work out how to block your chimney and fireplace, as well as seal up any cracks or gaps around the house, your gas fireplace should no longer be causing drafts.

It’s possible that after these steps, though, you’re still experiencing unwanted airflow because of your gas fireplace.

If you still can’t find the source of the draft, our article Gas Fireplace Cold Draft: Reasons and solutions specifies other steps you can take such as: checking the pilot light, sealing the chase, sealing the vent pipes, and sealing gaps around gas lines.

These steps should come after those detailed above since they often require removing the fireplace to look behind the firebox. This would be required to check the sealed status of the gas line connection and the vent pipes. In this situation, calling in a professional is highly recommended.

Finally, if the gas fireplace is no longer in use, you can seal it off permanently. You can frame, insulate, and drywall over the fireplace opening or seal it semi-permanently by installing a foam board insert bordered by rod insulation (this can be removed later if you wish to start using the fireplace again).