While rare, it isn’t unheard of for shower doors to shatter or explode seemingly out of the blue. If you’ve heard anything about incidents like this, you might have heard that thermal expansion has something to do with this spontaneous breakage.

Technically, this is so rare that it isn’t likely to be a possibility unless there is an error in the installation or a defect in the door itself. Plus, even if a door does shatter, it won’t be a huge hazard or pain to clean up. If you’re not convinced, or you’d like to learn more about what thermal expansion is and how it can cause a door to shatter, then you’ve come to the right place.

Glass shower doors expand when the temperature increases. However, the glass is tempered, which is less susceptible to thermal expansion. Very high temperatures or rapid fluctuations in temperature would be required for tempered glass to shatter. If there is an additional stressor, shattering is more likely.

As you may or may not know, the glass used for shower doors is made from tempered glass. In fact, tempered glass is used virtually everywhere that human safety is a concern if a break occurs—that means doors, microwaves, and cars.

This is because tempered glass is both more heat resistant than normal glass, and up to four times stronger. If it does break, it shatters into rather blunt pieces rather than sharp, jagged edges.

The process of tempering glass involves the usage of chemical or thermal treatments, though thermal tempering is much cheaper and, therefore, more common.

What is Thermal Expansion?

Thermal expansion occurs when any object or substance changes its size or volume in response to a change in temperature.

This happens because temperature is actually the measure of how fast the molecules in an object are moving—in other words, the amount of kinetic energy within the object.

The higher the temperature, the faster molecules move. In an object or substance, these materials move faster and faster with the increase of temperature, moving into “empty” spaces at a faster rate and causing an object to enlarge by taking up more space.

For example, wood expands and contracts when your house heats up during the day and cools off at night. You might have noticed an occasional creak from the walls or your wooden flooring at night. This is likely the sound of the wood (or other materials making up your home) changing size and shifting slightly.

Wood, however, is not the only thing that expands and contracts with the temperature. Most things do, like metals, glass, and many other materials. Of those that do expand with heat, gasses expand the most since there they are not “limited” like solid objects are.

Of course, this expansion and contraction of materials with fluctuating temperatures is not always without consequence. This constant change in size can, in some cases, cause materials to wear down or fail to function properly.

For example, plumbing can suffer from increased or decreased pressure or loose fittings from constant or drastic changes in size. And, of course, glass may be susceptible to shattering if it is under too much stress.

All Glass Is Susceptible to Thermal Expansion

There are several different types of glass—from annealed or “normal” glass to laminated glass, heat strengthened, and tempered glass.

Each type of glass has a different thermal expansion coefficient or “CTE,” which is a number that indicates how much a material will expand when exposed to heat.

That said, although some are more or less vulnerable to it than others are, every type of glass will still expand and contract with the temperature. No type of glass is an exception to this rule.

Tempered glass is far less susceptible to breakage from thermal expansion than annealed glass is. 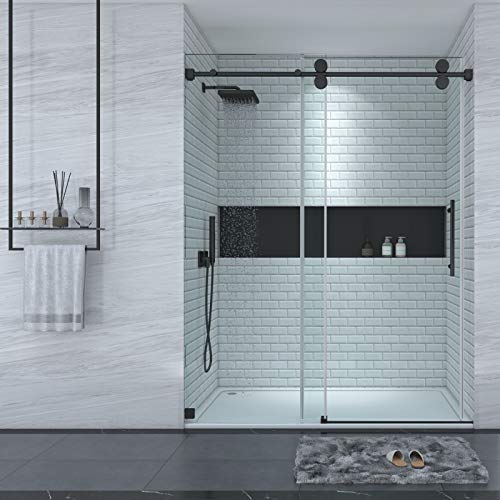 As mentioned before, tempered glass is created through the use of thermal treatments. To go a bit more into detail, the glass is heated to about 1292 °F (700 °C), and the exterior of the glass is then evenly and rapidly cooled.

This difference in the surface and interior temperature of the glass alters its physical orientation and creates more balanced tension across the pane.

This is what makes tempered glass stronger and less susceptible to breakage from various stresses, including thermal shock. Tempered glass is less likely to break from extreme temperature changes versus annealed glass, which is why glass cookware is generally made from tempered glass.

Can the Expansion Lead to Shattering/Exploding?

However, this does mean that thermal expansion and contraction are more likely to cause the door to shatter or explode in certain conditions.

For example, if your door is not perfectly aligned on and/or jumps the track it is on, the tension may increase stress on the door.

Similarly, a defect in the door such as a scratch, bubble, or nick in the glass will make the door more likely to break. This defect will cause uneven stress, and will be exacerbated by exposure to expansion and shrinkage.

Essentially, thermal expansion can only cause a door to shatter when combined with an additional factor.