In order to know which ceiling fan to purchase for your space and how to use a ceiling fan to the best of its ability, you need to understand ceiling fan airflow. For example, it’s all well and good to know that there is a summer mode and a winter mode, but knowing what happens to the airflow in each of these modes helps you to customize the fan’s function to work with your space.

To understand ceiling fan airflow, the basics of what it is as well as the complexities, including seasonal modes of airflow, must be considered in order to maximize it for your benefit.

Ceiling fan airflow is measured in CFM. It is influenced by motor capacity, blade design/number, fan location/clearances, and speed. The blades are often reversible. Summer mode pushes air down and winter mode pulls it up. Airflow direction is determined by which side of the pitched blade leads rotation.

When your ceiling fan is switched to summer mode, its blades will be turning counterclockwise.

To tell which direction your ceiling fan is turning, stand directly under the fan and look up, preferably while the ceiling fan is at a low speed so you can see the individual fan blades. The direction the blades are moving should be clear from this angle.

When a ceiling fan turns counterclockwise, the high part of the pitched blades will lead. This pushes air down and creates a downward stream of air.

Now, you need to “pitch” your right hand to a 45° angle so that the fingertips of your left hand are now in line with your palm.

This is how the blades push air into the area below the fan when in summer mode.

So, the air around the fan is pushed down. This also forces the air already below the fan to move closer to the floor. The space around the fan is filled with air from above it and further out to the sides of the fan because of the vacuum created by pushing the air down.

As air is pulled in from the sides of the fan, it creates a vacuum there, which is filled with air from the lower portions of the room, which is how whole room air circulation is achieved with a ceiling fan in summer mode.

As the air circulates, it creates an even distribution of heat/cold throughout the room.

Although this warm air will initially be felt by the room’s occupants, the warm air will displace the cool air that dwells near the floor.

But this is not the only way that a ceiling fan makes you feel cooler. If it was, I don’t think that ceiling fans would have held onto their place in the cooling business for as well and as long as they have.

The primary cooling mechanism of a ceiling fan in summer mode is the wind chill effect. Wind chill cools the people who occupy the room or, more specifically, those who are in the direct path of the downward airflow.

When air is pushed downwards, it actively moves across your skin. This blows away the naturally-forming layer of body heat sitting against your skin, making you feel cooler and allowing more body heat to be released and blown away.

The moving air also increases evaporative cooling if you are sweating.

This effect is noticeable and you will get a significant cooling benefit from a ceiling fan in summer mode.

Although ceiling fans redistribute heat/cold and make you feel cooler with the wind chill effect, they do not actually alter the overall ambient air temperature. This is because they cannot physically remove heat from a room like an AC.

If you pair the ceiling fan in summer mode with an AC, central air, or HVAC system, however, you can make both systems more efficient and effective.

However, depending on the location of the return vents and registers, clockwise direction might actually be best to provide the most effective cooling (although you lose wind chill).

It is in these situations that it pays to understand how the air flows in summer and winter modes.

For all those out there wondering, ceiling fan direction really does matter, and this is obvious when you look at what reversing the direction of rotation does to the airflow in a room.

In winter mode, the lower part of the pitched blades will lead while the fan is turning. This draws air up toward the ceiling.

To understand this, hold your hands like you did previously, but this time, you tilt the fingertips of your right hand down at a 45° angle.

When you move your right hand towards your left hand, your left hand should be forced upward. This is what happens to the air with a clockwise-rotating ceiling fan.

Colder air from lower portions of the room is pulled out of the occupied space and forced into the space between the fan and the ceiling, where warm air has gathered. This warm air is thus displaced and moves out from the ceiling fan.

This is how the warm air is pulled into the occupied space.

Now, as it was presented above, you may think that this is a good heating system. The cold air is pulled away and replaced with warm air.

However, just like in summer mode, the ultimate result of this movement of air is that the two “extreme” temperatures mix together until they are more evenly distributed throughout the room. The room may feel a little warmer but the overall ambient temperature has not changed.

So, is there a wind chill equivalent that can make the ceiling fan in winter mode more effective? Unfortunately, the answer is no. But don’t write off the winter mode just yet!

With the simple addition of a space heater, radiator, or another heating device, you can make the ceiling fan and the heating device more efficient and effective when the fan rotates in winter mode.

It can also be used with your HVAC system, although, in some cases, counterclockwise rotation on low speed with better help to heat the room. It all depends on where your return vents and registers are located.

When people talk about the capacity of a ceiling fan (and other fans as well), they speak about how many cubic feet of air the fan can move each minute. This is shortened to CFMs.

Multiply the height, width, and length to get the volume of the room. Then match this to the CFM rating.

The recommended CFM goes up in increments of 1,000 CFM for each added 100 square feet (length x width).

Good ceiling fan CFM ranges from 4,000 to 5,000 CFM. Above this CFM rating would be excellent CFM.

Ceiling fan motor capacity is a large determinant of the fan’s CFM rating. In order to rotate the fan blades and move the air, the ceiling fan has to exert enough power to overcome inertia and maintain a constant speed, and do so without overheating.

In general, increasing ceiling fan motor capacity increases the volume of air moved per unit time and increases the speed at which this air is pushed down or pulled up.

This is because the larger a motor gets, the more room there is to make the power-creating process as efficient as possible. This is not as possible in small motors.

The ability and efficiency of a ceiling fan in generating airflow are dependent on so many interlinking factors that it is very difficult to provide a definitive relationship between blade design and number and CFM/efficiency.

However, we can make certain generalized statements with caveats:

You can read more in Bigger Fan Blades: Will They Move More Air?

You can read more in Ceiling Fan Blade Pitch Explained. 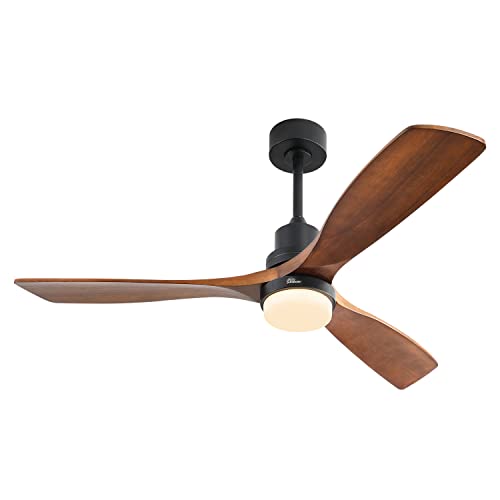 You can read more in Most Efficient Ceiling Fan Blade Design (Highest CFM per Watt).

As you may observe when you operate a ceiling fan in your home, when you increase the speed setting of your ceiling fan, you will experience more airflow.

In terms of efficiency, higher speeds tend to use more power, so the efficiency (amount of power used to power a rotation) might be reduced.

Walls, ceilings, floors, and objects create obstructions to ceiling fan airflow, either completely blocking it off or causing the airflow to become turbulent and less efficient.

There are minimum clearance distances that a ceiling fan should adhere to in order to be most effective and efficient.

In addition, the air further away from the ceiling fan will be less affected by the moving blades, so you need it closer to people or the predominantly occupied spaces. This is typically in the middle of the room.

To put a ceiling fan in the corner of the room, for example, would increase airflow turbulence. More energy is lost to non-laminar flow and the air won’t move as well in any direction. And the areas on the other side of the room to the fan will not feel the effects of air movement.

To put a ceiling fan too high would mean that the downward flow of air has slowed down too much by the time it reaches the occupants to have any significant effects.

You can read more in Simple Tips to Improve Ceiling Fan Airflow.