Range hoods pull “dirty” air from a kitchen. This also causes loss of heated air. Reduce this by timeously turning off the hood. When range hoods are off, heat is lost if dampers are ill-sealed, damaged, or broken. Solve this with new seals, flapper repairs, or a new damper. Insulated ducts reduce heat loss.

Energy efficiency is often a prevalent concern when it comes to owning a home. A common location for heat loss, but one not often thought of, is the range hood above your stove.

Below, the causes of heat loss, both when the hood is on and when it is off, are detailed, as well as how to prevent heat loss through your kitchen exhaust system. Proper installation of backdraft dampers and energy-saving tips are also gone through in detail.

Loss of Heat While Hood Is On

A range hood is often necessary for the longevity and safety of your kitchen, but it can make cold winters even colder when it is on. When taking into account the purpose and use of a range hood, it begins to make sense that a loss of heat in your home may occur while it is on.

A range hood can be a lifesaver while cooking. It can take up excess steam from boiling water on the stovetop, which can protect paint and wallpaper on your walls, as well as take up smoke, flammable gas, and strong cooking smells.

Just as hot air from cooking is exhausted through your range hood, so is the air that your HVAC system has warmed.

The range hood is essentially removing the air from the kitchen and allowing “fresh” air to be pulled in down the temperature gradient. This fresh air may be from other conditioned spaces, in which case, you may not notice the heat loss, although your heating system will be working harder. Alternatively, the fresh air may be pulled in from outside through cracks, holes, and imperfect seals around windows and doors. This air would be notably colder.

However, you should note that heat loss may not be noticeable since extra heat is produced while cooking. Heat loss through the hood and heat gain through cooking may balance out.

Losing Hot Air When Hood Is Off

If you notice that your kitchen is cooler when the range hood is not even on, then the problem might still be the range hood. However, it will not be as a result of the intended function of the hood, but rather a problem with it, and the most common issue is a faulty backdraft damper.

The purpose of a backdraft damper is to block outside air and exhausted air from coming into the ducts through the exit vent and into the home. They are designed to open only one way and to open thusly in response to the pressure created when the air is pushed through the vents by the range hood fan.

Sometimes, there are two dampers; one at the top of the hood and one where the duct exhausts its air.

If either one of these dampers is obstructed or isn’t closing properly or there are problems with the seals, then outside air can infiltrate your kitchen and the heat from your home can escape.

Transference of Heat to Air in Ducts

Air doesn’t have to be physically moved out of your home for heat loss to occur.

Heat loss is even easier in this situation since metal is a great conductor of heat and the dampers are composed of metal.

1. Be Diligent About Turning off Hood

To lessen the impact of the range hood on your home’s temperature, especially in the colder months, it is important to turn off the hood when it is not needed.

When all excess gas, steam, smoke, and odors of your kitchen have been vented outside, this would be the ideal time to turn off the hood.

The hood being turned off would only allow for more passive heat removal to occur in the kitchen. If your dampers are functioning properly, the heat loss shouldn’t be significant while the hood is not taking in kitchen air.

Turning off the hood will also have energy benefits since running the range hood more often will accumulate more energy costs.

As said before, heat loss when the range hood isn’t on is usually the fault of the dampers within the vents connected to the range hood.

Dampers can be fixed, though, and it is important to do so to increase the home’s energy efficiency, as well as to keep it warm in the winter. 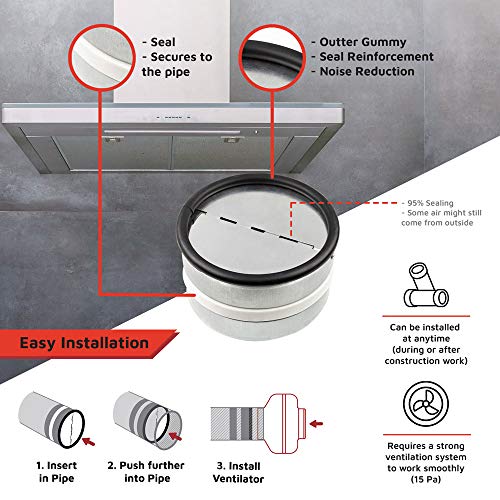 Backdraft dampers are not an integral part of the ductwork. This means that it is a separate part that needs to be inserted and somehow joined to the terminal point of the vent and sealed in place. The damper itself should have some kind of rubber seal and then a backstop of caulking is also laid to affix it firmly and ensure airtightness.

Seals can become damaged, deformed, or broken, and this will create alternative pathways for the air to travel out of and into the duct, even when the flappers are closed. Replacing the seal or laying a new bead of caulking should eliminate any heat loss resulting from an imperfect seal.

If the seal around the backdraft damper is fine, the issue may come from the damper itself. It is possible for the flappers to become damaged (bent, stuck open, cracked, pitted, etc.) as a result of general wear and tear or exposure to extreme weather.

If the flappers are bent, you can attempt to bend them back into the correct shape or place, but be careful not to cause more damage.

If they are stuck open, you should check for objects, such as a small stone or a build-up of dust or kitchen grime, that could be causing this. Clean the obstruction away and check that the flappers close properly. Alternatively, you can try oiling the spring hinge of the flappers.

Sometimes, if there is an issue with the damper flappers, they can be caught by the wind, lifted and dropped again. This will let cold air enter the ducts and pull heat from the kitchen. It will also be accompanied by a noisy banging or tapping sound.

Should the damage be too severe to remedy, then your next recourse would be to replace the backdraft damper. Choose a higher-quality damper, like the AC infinity dampers, to ensure longevity and a warm kitchen! 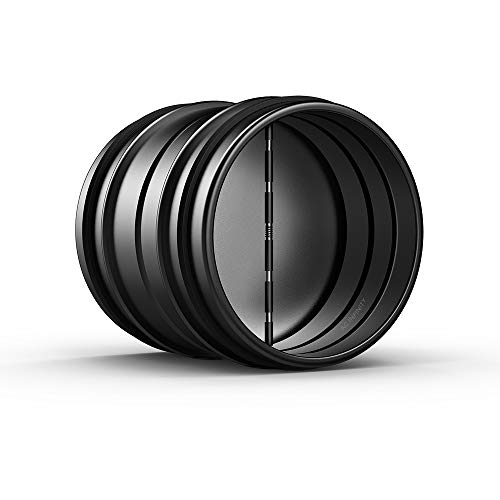 There are a few tips and things to keep in mind while installing a new backdraft damper.

One is that it is absolutely necessary to make sure that you are installing your damper in the correct orientation. If the damper is installed backward, the air from your kitchen will not be allowed to exit the home and air from the outside will freely enter your home.

To make sure that your damper is installed properly, make sure that the face of the blades is facing the direction of the airflow (away from the kitchen and out of the vents).

Another important point to remember when installing a damper is that it is highly recommended, if not required, to seal the frame of the damper to the vent with a bead of caulk, don’t just rely on the rubber seal. This ensures the energy efficiency of the damper and range hood system.

When the air in your range hood ducts is colder than the air in the kitchen, it pulls heat out of the kitchen, following the temperature gradient. This can happen even if your backdraft damper is in tip-top condition and working properly.

The reason the air in the ducts gets so cold is a lack of insulation. The air in the ducts is warmer than the air of unconditioned spaces, such as crawl spaces or attics, or the outside air through which the ductwork passes, and so heat is lost through the metal tubing.

Heat recovery systems are a ventilation system that extract the heat from the outgoing air of the house and pass it to the air that is being taken in from the outside. These systems greatly reduce heat loss in the home, which can save a large amount of energy.

However, technology is advancing rapidly, so “watch this space” for the day when you can install a heat recovery system into your range hood’s ventilation system and eliminate heat loss while you are running the extractor.