Heat pump dryers have been growing in popularity for a multitude of reasons, including, but not limited to, their energy efficiency and gentleness on clothing. Perhaps one of the biggest draws to them, however, is the fact that they are ventless.

Now, dryer vents are designed to stop all the moisture, heat, and lint from filling your laundry and house. So, are ventless dryers inherently different from vented dryers or are they just more inconvenient and dangerous, releasing all these by-products into your home?

Heat pump dryers are ventless. They’re designed so that the air released doesn’t need to be vented. Moisture is condensed and collected in the dryer. The air is cooled inside the dryer. Lint is captured in a double-filter system. The air is also recycled, only released into the room after the load is dry.

As mentioned, heat pump dryers are a type of ventless dryer. This means that they are specifically designed and engineered to function without a vent.

That’s not to say they don’t produce humid, lint-laden air when drying clothes; however, ventless dryers deal with lint and moisture removal in a different manner than traditional, vented dryers.

We’re all familiar with lint—that fluffy, annoying mass of fibers that sheds off our clothing and collects in our dryers’ lint filter.

When it comes to vented dryers, we know lint is collected on its way out, right at the beginning of the duct used to vent the moist dryer air, and any lint that is not caught is simply removed from the house.

But heat pump dryers collect lint a bit differently since their drying and filtering processes are all completely internal.

The drying process involves a repeated heating and cooling of the air, and we’ll detail this cyclical process more in the next two sections. However, you should know that the air leaving the drum is double filtered to get rid of lint.

Cooling the Air in a Heat Pump Dryer

Heat pump dryers are so named because they use heat pump technology in order to dry your laundry, recycling the same air by cooling and reheating it over and over.

It is this cooling of the air that is key to their design, enabling heat pump dryers to clean their air internally without the need for an external vent, and we’ll get into why that is when we explain how heat pump dryers collect water. First, let’s briefly explain the cycle of heating and cooling.

A heat pump dryer will take in air, which it then heats and pushes into the drum. Inside the drum, the hot air removes moisture from your clothing in the form of steam.

Next, this hot, humid air moves out of the drum. It is here that it is filtered for lint, and cooled by passing over coils filled with refrigerant in cold, liquid form.

Lastly, it is reheated by blowing over coils in the compressor, which are filled with hot, gaseous refrigerant. The air moves back into the drum to continue the cycle.

As mentioned, the cooling step of the heat pump dryer’s process is the reason a heat pump dryer is able to clean its air of moisture internally, without the use of a vent.

As you may know, evaporation is when heat causes water to become gaseous, and condensation is when cooler temperatures enable water to return to a liquid form.

Because hot, steamy air goes through a contained cooling cycle within heat pump dryers, the moisture it contains is able to condense back into liquid. From here, the water may take one of two pathways depending on the dryer’s model and how it is set up.

First, the water may drain into a collection drawer, which must be regularly emptied. Otherwise, if the dryer has been set up to automatically drain the water through a hose, then that is the route it will take.

Either way, the water from your laundry is removed and safely separated for disposal. After that, well, we’ve already been over the next step; what remains is cool, dry air, that is then reheated and reused.

Heat pump dryers are exclusively electrically powered. In other words, no combustion gases are created during use, like in the case of vented gas dryers.

That means there is no dangerous carbon monoxide by-product created. So, with the lint and moisture already taken care of, there is nothing else that could need venting.

Note: there is the possibility that dryer sheets may release VOCs, which makes using them with ventless dryers potentially dangerous.

As covered, the air inside the dryer is recycled repeatedly while a load is being dried. Eventually, however, at the end of the drying cycle, this air will be released.

While you may have concerns about this air needing to be vented, worry not!

The reality is that while it may still be slightly moister than the rest of the air in your home, or it may contain trace amounts of lint, it’s clean enough after several rounds through the lint filter and heat pump that it will have no significant effects.

In other words, this end-of-cycle air doesn’t need venting either.

Heat pump dryers require maintenance just like any other dryer. Some of those maintenance tasks are universal to all dryers, while some are heat-pump specific. I’ll be listing them all, regardless:

Making sure that you keep up with maintenance will ensure that all the safety mechanisms in place to ensure the air released by ventless dryers is safe will remain fully functional.

There are several benefits to getting a ventless dryer.

First and foremost, no vent means no additional hole in your home! Whether this matters to you because of the aesthetic, the lack of installation work (or installation cost!), or because there’s no need for a breach in insulation, it’s certainly a multifaceted benefit.

This also means that come winter, you won’t be running up heating costs by blowing heated air outside your home every time you run the dryer. 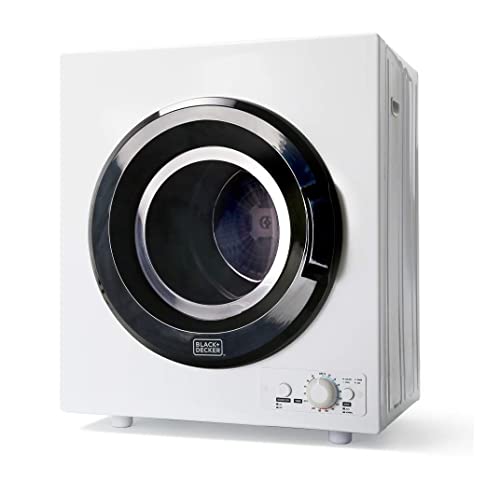 Speaking of costs, while ventless dryers are often more expensive up front, they are far more energy efficient than vented dryers. Over time, they could actually save you money on both running costs and heating costs.

Last but not least, no duct means no duct maintenance! If you’ve cleaned out a duct before, you know it can be a pain to do on your own—and paying a professional can be a pain in your wallet.

All in all, I think a ventless dryer is certainly a worthy investment.