Even on days when a ceiling fan isn’t necessary to cool you down, it can still be nice to have a fan running to circulate the air. When fans run so often, though, it is only natural to wonder how much power is being used to do so, and if the comfort is worth the cost.

It is important to discuss power through the lens of wattage, airflow, and efficiency. All three play a role in ceiling fan power usage. For a comprehensive study of five top ceiling fan brands and their power usage, read on.

Average ceiling fan power usage is 31.7-55.1 W. Typically, increasing fan size increases the power usage. While relatively similar across sizes, it seems that increasing the size of the fan can decrease its efficiency.

When deciding on a ceiling fan, knowing its power usage is important, but it does not give you the full story of how the power is actually used functionally. This is where efficiency comes in.

To find the efficiency of a ceiling fan, you must combine the measurements of airflow and power usage.

When the airflow is divided by the power usage, the measurement of the fan’s efficiency is acquired. The unit of measurement is CFM/W.

With this information, we can confidently say that the first fan uses less power. But this doesn’t mean it’s the best option. Although this fan does use less power, it is not necessarily the best pick when it comes to efficiency.

In order to find out which is the most efficient, the airflows must be used.

To calculate the CFM/W, you can simply divide the CFM by the wattage.

In the case of efficiency, higher is better. The second fan has almost double the efficiency for just 10W more power. This means that the second fan is far more efficient and moves more air per minute while using less energy to do so.

So, finding out the power usage of a fan is very helpful, but we can’t stop there if we want applicable information.

In order to study the power usage of a ceiling fan, and make the results valuable to you, the reader, I will be investigating five popular ceiling fan brands.

There are many factors that can affect the efficiency of a fan but since the size of the fan (in terms of blade length) is one of the defining and distinguishing characteristics of ceiling fans, we will be focusing on the power usage and efficiency of five different sizes in each brand. These sizes are:

I have only chosen 3- or 4-bladed indoor ceiling fans to eliminate some of the variables that would skew the data.

First, you should note that there are regional differences in the cost of electricity. Each of the prices shown below is in American dollars:

Now we need to convert the average fan wattage into kilowatts per hour (kWh) in order to demonstrate the cost of running the various fan sizes.

To do this, we divide the average wattage by 1,000 to get the kilowatt value. When wattage is provided, it is typically the hourly rate.

To give you a better idea of what this translates to each month, let’s calculate for 10 hours daily usage, seven days a week, over 4 weeks. Ten hours is a little over the average recommended limit of 8 hours, which gives us an overestimation of cost, which is always better to work with.

The most power used by the ceiling fans considered above is 75 W.

In general, it seems that the power usage increases with increasing fan size. This trend was consistent as size increased but was not true for the 60” to 72” ceiling fans.

For some reason, their average wattage is lower than 52” fans of the same brands.

At face value, the most efficient ceiling fans seem to be 60” to 72”. However, because efficiency decreased as size increased for the other sizes, this may be a product of using only a few brands since five isn’t a great sample size (realistic for the purpose of this article, but not great).

In other words, the data gathered for the 60” to 72” fans may not be true of all fans within this size range.

Assuming that data collected for the 60” to 72” fans are outliers, the 36” fans may be the most efficient.

Is It Expensive to Power a Ceiling Fan?

When comparing ceiling fans to other types of fans, ceiling fans fall into the middle of the price range. Fan electricity usage can vary from $20 to $350 a year when they are run year-round.

The lower end describes desk and floor fans. These are usually fairly small and have a smaller power demand than a larger fan.

On the higher end is a misting fan. These are so much more expensive because they require the power to spin the blades as well as to spray water to make the misting function work.

I only included 3- and 4- bladed fans to keep from skewing the data. So, what does this mean for fans with more than 3 or 4 blades?

Increasing the number of blades is likely to increase power usage because the more blades there are, the greater the fan’s overall weight tends to be. Heavier fans need larger motors to rotate the blades and larger motors tend to use more power.

However, more blades can also increase the CFM, which means that the efficiency may not change very much compared to the results provided above.

Although DC ceiling fans are not very popular since they are still fairly new technology, having a DC ceiling fan rather than an AC one would make a large difference in the power consumption of your ceiling fan.

If you have a DC ceiling fan, it is likely that your fan’s power consumption will not match the table provided in this article.

The most energy-efficient fan that I have found and which is readily available is the Reiga 52-in Bright White Ceiling Fan (amazon link). Its efficiency is 234 CFM/W, which is most likely aided by the fact that it has a DC motor. 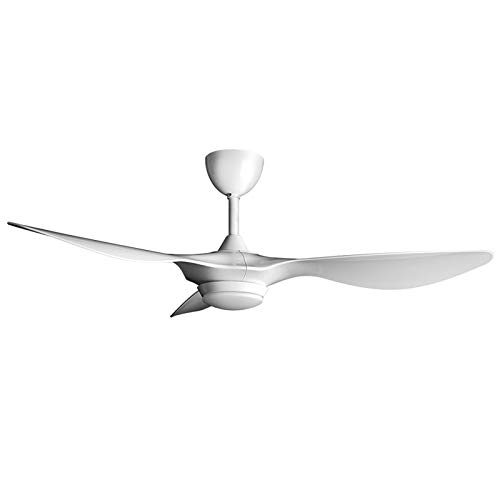 Although this fan is very efficient compared to other fans researched, there are still ceiling fans with nearly three times the efficiency.

The highest has an efficiency of 483 CFM/W and is from a company called AERATRON. These ceiling fans with efficiencies in the 400s are fairly rare, with there only being about a dozen of them that I could find.

Although there are many ceiling fans that have a higher efficiency than 234 CFM/W, it is important to note that the above-average efficiency for a ceiling fan is about 110 CFM/W.

An efficiency of 400 CFM/W would not necessarily be essential for your average home to have. A lower efficiency would work just fine.