Reme Halos are designed to reduce pollutants that lower air quality in the home and remove odors from smoke and other pollutants. As far as the exact mechanism by which they work, though, the process isn’t easy to visualize.

The Reme Halo works on the basis of a patented process known as photohydroionization. Words like that can make out brains turn off, but the process is actually relatively simple when broken down and explained without all the fancy science terminology. That is my goal in this article—that you will understand how these machines work, which will help you to utilize them in the best way.

Reme Halos use photohydroionization. UV light shines on a hydrate-coated metal surface coated. UV energy releases electrons from the metal. The hydrate hastens the process. Electrons bind to air molecules, forming hydroperoxide ions. These destroy microbes and cause allergens to agglomerate and be caught in filters.

A Reme Halo is comprised of: 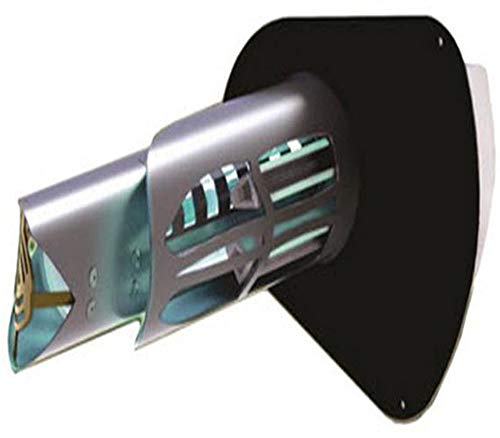 The power supply has an adjustable output and allows the unit to operate without having to plug into an electrical outlet. This is very convenient, particularly considering where the Reme Halo is placed.

The Reme cell side of the unit is inserted into the HVAC system and secured there with the mounting plate (the power supply is outside of the duct).

Inside the Reme cell, there is:

The catalytic target structure is a metal plate composed of titanium and silver, copper, or rhodium. It is coated in a hydrophilic agent or hydrate to form a catalytic surface. A catalyst is something that causes a chemical reaction to occur more quickly.

The broad spectrum UV light is paramount to the mechanism of the Reme Halo and it is positioned so that it will shine onto as large an area of the catalytic surface as possible.

An ultraviolet light source is used to directly ionize air molecules, which is a process that will be described further below.

Reme Halos purify the air by producing ions, specifically, negatively charged ions (anions). The way in which these anions clean the air is described later on in the article. First, let’s look at the chemical reaction by which they are produced. 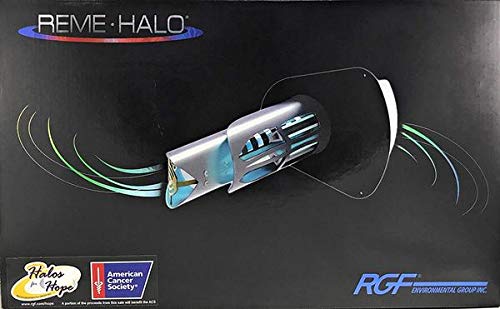 The chemical reaction in question is a process known as photohydroionization and it requires an appropriate energy source, moisture, and a material that will release electrons.

The UV light provides the energy source, the hydrate of the catalytic surface traps ambient moisture from the air, and the metal catalytic target structure is a rich source of electrons.

However, the quantities of anions produced in this way are low when looked at over a certain time period.

By adding the metal target structure, we move from ionization to a process called the photoelectric effect.

This involves the energy from a UV light source colliding with a metal surface, irradiating it, and causing it to “photo-electrically eject electrons“. The electrons, in turn, collide with air molecules, creating anions. This system is more efficient than ionization, but there is still room for improvement.

With the addition of the hydrate or catalytic surface, we finally achieve photohydroionization. The catalytic target structure and the catalytic surface significantly increase the rate at which negative ions are produced, making the Reme Halo a very competitive air purification system.

The ions that are of particular interest, in this case, are the hydroperoxides.

Ions Spread Through the House by HVAC System

So, now that you know how the Reme Halo produces ions, specifically hydroperoxide ions, it’s time to look at how they work.

The ionized air is then spread throughout the house by the HVAC system.

Thus, the air entering the room will be clean and the ionized air particles will also clean the air that is already in the room or it will displace the “dirty” air, which leaves the house or enters the HVAC system from where it will pass through the Reme Halo.

Air purifiers that sit in a specific room will only be effective in that room. By placing the Reme Halo in the HVAC system, you extend its reach and make it far more effective.

Effects of Ions on Air Pollutants

Reme Halos have their pros and cons, like all products.

Their effectiveness has been proved but not undeniably (there is a lack of follow-up or corroborating studies). However, the theory makes a lot of sense and if the theory is correct, then the Reme Halo’s photohydroionization certainly makes it a leading air purifier.

Hydrogen peroxide ions rely on collision with pollutants to be effective. Sometimes, this contact is enough to eliminate the pollutant; other times, the ions will pass a charge to the pollutant, causing them to stick together.

Hydrogen peroxide ions that collide with microbial pollutants (bacteria, viruses, and mold) are able to neutralize or destroy them. This is because they interfere with the microbes’ cell membranes and DNA.

With a compromised cell membrane, they are unstable and die, and with faulty DNA, they cannot replicate.

When the microbes are destroyed, they cannot make you sick, even if their remains are still in the air.

Molecular Formulas of Pollutants Are Altered

Adding hydrogen peroxide ions to some pollutants alters their molecular formula. They may not be destroyed, but they will no longer be harmful or offensive.

For example, several VOCs react with hydroperoxide. The products of these reactions are often not as dangerous.

The attraction between particles of different charges causes them to stick together, increasing their weight and then allowing for their removal.

Regular air purifiers have a hard time with particles that are extremely small. Because of their size, they are able to get past air filters in your home.

When pollutants like smoke, pollen, dander, and other particulate matter clump together, the size and weight of the agglomerates are greater than that of the individual pollutants.

This makes them more likely to be caught in an air filter or to settle onto surfaces from where they can be vacuumed or otherwise cleaned up.

Ozone Is a Byproduct

The energy from broad spectrum UV light is not only able to produce free electrons; it is also able to split oxygen molecules apart.

These free oxygen atoms don’t like to be unbound and they can bind to other oxygen molecules (that haven’t split) to form triatomic oxygen, which is more commonly known as ozone.

They are not ozone generators, and the amount produced is unlikely to cause health issues, however, it does produce a certain smell.