The appliances at IKEA are all unbranded. But with appliances, particularly large electrical appliances, knowing who made them can help you to determine the quality. However, looking on the US IKEA website and product pages, I have found no mention as to who makes their fridges.

Perhaps IKEA wants people to think that these appliances are their own creations, or perhaps the actual makers are worried that people would prefer to buy from IKEA instead of directly if they knew. Whatever the reason, I have done some digging, and I have found an answer to your question.

Newer ranges of IKEA fridges are primarily made by Electrolux (and the sub-brands, like Frigidaire) and Midea. Previously, Whirlpool was the main manufacturer for IKEA appliances, and there are some older ranges that may still be available.

Contents show table of contents
Whirlpool Used to Be the Main Manufacturer
Current Manufacturers
IKEA vs Direct: How Do the Fridges Compare
What About Other Countries?
Are the Fridges Any Good?
Was this helpful?

Whirlpool Used to Be the Main Manufacturer

In the past, it was fairly widely known that Whirlpool was the primary manufacturer of IKEA’s electrical appliances, including fridges. This can be confirmed with an IKEA appliance warranty document that states that all aftersales services will be done by Whirlpool.

However, this document was published in 2009, which means that it is very outdated.

As you will see in the next section, Whirlpool is probably not the primary manufacturer anymore, although some of the older product ranges may still be Whirlpool creations.

It would seem that at least two years ago, there was a shift to predominantly Electrolux-manufactured appliances.

Many buyers noticed that the refrigerators sold by IKEA looked like those available from Frigidaire with minor cosmetic differences and a noticeable lack of branding. Frigidaire falls under the Electrolux umbrella.

For example, the IKEA STJÄRNSTATUS looks almost identical to the Frigidaire PRFC2383AF.

On a Reddit page, a verified co-worker (so, someone who works at IKEA), confirmed that most of the electrical appliances are now supplied by Electrolux, but they also mentioned Midea.

This IKEA employee stated that the LAGAN series was made by Midea. I could not find a similar product on the Midea website, but that does not rule out the possibility that Midea produced this line for IKEA specifically.

After further investigations, I found that the IKEA ÖVERSKÅDLIG looks almost identical to the Midea BCD622WE, so even if Midea are not responsible for the LAGAN series, they are certainly one of the manufacturers used by IKEA.

Other potential manufacturers are Electrolux (direct) and AEG, which is another company under the Electrolux umbrella.

Obviously, now the aftersale care is going to be handled by these companies, not Whirlpool.

IKEA vs Direct: How Do the Fridges Compare

If you can buy direct, then why buy from IKEA?

Well, if we look at the first example of comparable fridges (the IKEA STJÄRNSTATUS and the Frigidaire PRFC2383AF), we can see immediately that the IKEA product is $1100-$1300 cheaper than the Frigidaire one, depending on which color you go for at IKEA.

In addition, the IKEA model has a 5-year warranty whereas the Frigidaire one has a 1-year parts and labor warranty.

Then, if you can get the fridge for less at IKEA, why would you buy the branded model?

The answer to this is that while the designs may be almost identical, they are not the same and the manufacturer will almost certainly give their branded product the edge. This may be additional features or slightly higher-quality materials.

What About Other Countries?

IKEA is a near-worldwide company but so are Midea, Electrolux, and Whirlpool. There is no reason why IKEA would use different manufacturers in different countries.

Australia has a slightly different range of refrigerators, and while I cannot find exact matches as with the USA range, the fridges from IKEA Australia have definite similarities with Electrolux units. 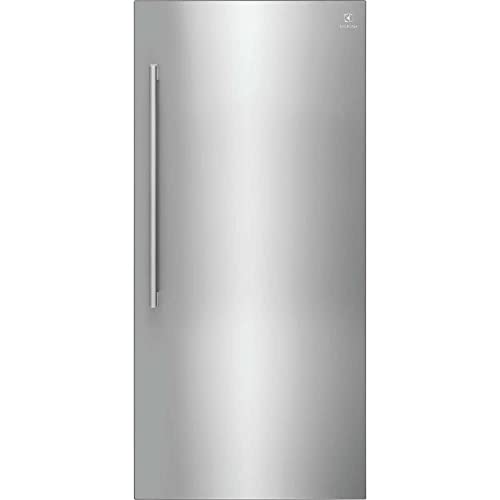 IKEA Canada has a very similar range to the US store, so these are also manufactured by Electrolux and Midea.

In Belgium, IKEA electrical appliances, including fridges are made by Whirlpool, Electrolux, BSH, and Midea. This is the only IKEA site that actually states this.

IKEA UK has the broadest range of refrigerators, but most of these are also clearly made by Electrolux.

Are the Fridges Any Good?

Electrolux, Midea, and Whirlpool are all good, international brands. While it is not openly stated who makes the appliances for IKEA, it is still obvious from the design characteristics who is behind the production of these units.

As such, these big brands are not going to risk producing sub-quality products. In addition, IKEA is powerful partner to have, and so providing them with good items to sell is in their best interests.

One more reason why these manufacturers would not create poor-quality items for IKEA to sell is that IKEA offers a 5-year warranty, and the manufacturers are responsible for any repairs and services.

Now, this is not to say that the products are a match for the branded ones. After all, you are getting them at a lower price. But they are, like all IKEA items, worth what you pay for them and decent at performing their job and keeping food fresh (provided you do your part).