It can get rather hot and muggy outdoors in the summer, depending on where you live. If you’re someone who has trouble enduring the heat, it sucks not be able to enjoy sitting out on your porch without sweating a river! Having a fan installed sounds like a great idea, especially if you have a covered porch.

Ceiling fans can be effective outside, but one thing to note about this is that you need to be careful about the type of fan you use. Indoor and outdoor ceiling fans are rated for different uses because they have different designs and safety features suited to a particular environment.

Indoor ceiling fans are dry-rated and are not equipped to handle outdoor conditions, and can break or cause a fire. A fan installed in a covered porch must be at least damp-rated if not wet-rated. These fans are made to withstand exposure to the elements in both the materials used and the design.

Ceiling Fans Are Effective Outside

Between ACs and ceiling fans, only one of the two cooling devices is actually effective outdoors, and that’s the fan.

This is because ACs work best in a closed environment where the cooled air they circulate is actually contained. Outdoors, there are no walls to contain the cooled air and it will quickly dissipate leaving you hot and your power bill high.

Ceiling fans, on the other hand, don’t actually cool down the air. The rapid flow of air across your skin creates windchill and assists with the evaporation of sweat, which is what cools you down. The effectiveness does depend on the size and position of the fan in relation to people, but ceiling fans are designed and installed with these factors in mind.

With that said, while a ceiling fan can help cool you down outside, not all fans are made the same. A fan that is installed outdoors should be able to weather the elements—primarily water.

Indoor Ceiling Fans Are Not Safe to Use Outside

While all ceiling fans technically operate in the same way, an indoor ceiling fan is not suited for outdoor usage. The reason for this primarily lies in the materials that these fans are made from.

Indoor ceiling fan blades are generally made from wood. While solid and coated, these blades are vulnerable to rot and mold when exposed to the moisture that is present outdoors.

Ceiling fan blades can also be made of plastic. When exposed to extreme outdoor heat rather than moisture, these parts may warp or bubble. On top of being unsightly, this can reduce the fan’s ability to effectively create airflow, and can cause the fan to wobble, which is dangerous.

The metal pieces that make up the other parts of the fan may not be suitable for outdoor usage either, since wetness can cause them to corrode or seize up.

Lastly, it should be noted that since indoor ceiling fans are not made to handle moisture, being exposed to the elements could cause moisture to seep into the ceiling fan’s interior.

If even a small amount of water manages to travel to the motor, this can cause damage, and potentially even start an electrical fire.

Of course any fire or fire hazard is a concern, but it should be noted that electrical fires are difficult to put out. Not only can you not use water before cutting out the power to the fire’s location, but in this scenario, the fire would be above your head!

Use a Damp-Rated Fan for Covered Porches

Rather than installing an indoor ceiling fan outdoors, you’ll want to look for a ceiling fan that is suitable for the outdoors.

Damp-rated ceiling fans are able to handle a fair level of humidity and moisture. Since you’ll be installing your fan in a covered patio, it should be alright.

However, damp-rated fans are not equipped to handle direct exposure to the elements. If you want to play it very safe or if your porch is only partially covered, you may want to consider a wet-rated ceiling fan, which can handle more extreme exposure.

UL determines safety ratings on many of the products that are sold in the US by putting each product through testing.

This allows consumers to decide which products are right for their needs just by looking at the provided ratings, knowing that they were tested by a reliable third party.

How Does This Differ From an Indoor Fan?

Damp-rated ceiling fans are designed for usage in areas with a higher moisture content than dry-rated (indoor) fans are.

This is evident both in design and in material. For example, the motor is designed to protect the wiring from water damage or rusting. This makes an electrical fire or electrical short much less likely to occur.

Additionally, the metal components of the damp-rated fans are guaranteed to be made from materials that are not susceptible to rusting, whereas that’s not necessarily the case for dry-rated fans. So, the lifespan of an indoor fan that is installed outside can be greatly reduced.

Many plastic fan blades are even made to simulate wood if you desire absolute minimal risk of rot but prefer the natural look.

With all that said, it’s still important to know exactly what kind of conditions damp-rated fans can handle. They are meant to be installed in covered outdoor areas, not exposed areas. This is because damp-rated fans are intended for handling conditions like humidity and fog, not full-on rain and snow. For that, you need a wet-rated fan.

If you’re into the sleek, dark, minimalist style, take a look at this Hunter Cassius Matte Black Indoor/Outdoor Ceiling Fan (amazon link). This three-bladed damp-rated ceiling fan has a reversible draft for use in summer or winter. Additionally, it has a pull chain for ease of use. 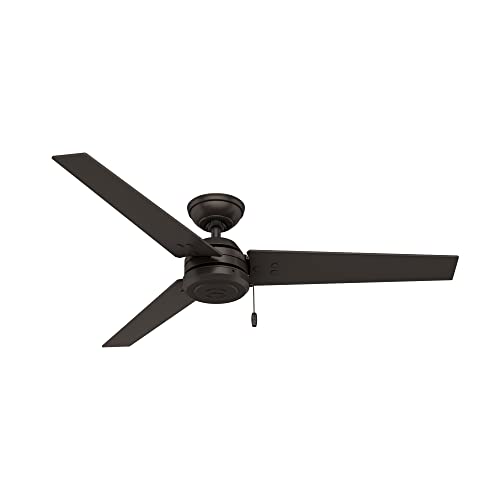 While the majority of users are happy, some report low airflow.

If you’re looking for something with a light, this Prominence Home Outdoor Ceiling Fan (amazon link) may be a better option. While this fan also offers a sleek appearance and reversible airflow, it comes in white or matte black to suit your preferred aesthetic. 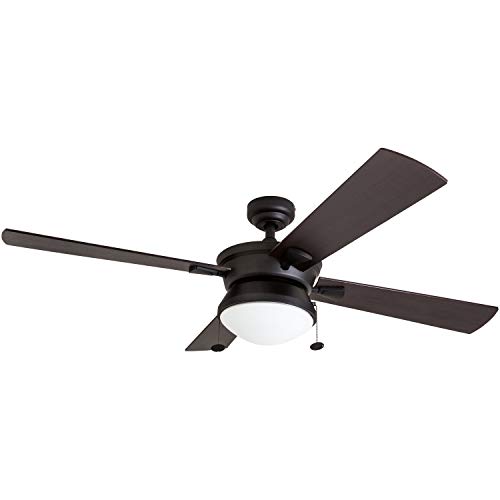 Installing the fan blades on this fan is considered by some to be a tricky task.