For many US citizens, buying products that will support our economy and business owners is important. However, ceiling fans are a product for which many companies outsource production.

I was hard-pressed to find ceiling fans that were actually made in the USA. But there are some options—fewer if you want all aspects of manufacturing and assembly to take place on American soil; more if you are content with some parts or the assembly being American-based.

Most mass-produced ceiling fans are partially or completely made overseas in various regions of Asia and certain parts of South America. Many of these ceiling fan companies started in America but moved production to save on costs. Bespoke or custom made-in-the-USA fans can be found.

Where Are Most Ceiling Fans Made?

Before we dive into the possibility of ceiling fans made in the United States of America, first you need to be aware of where most ceiling fans are currently made.

As you may have guessed, most of the world’s ceiling fans are manufactured and produced in China.

Made in the USA Ceiling Fans Still Exist

The Federal Trade Commission (FTC) says for a product to be labeled as ‘made in the USA’, it must be (almost) entirely made in the USA.

It further explains that if all the product’s parts and processes are made and done in the US, it can be labeled as made in the USA.

Ceiling Fans Made in the USA

Unfortunately, there are no larger companies that mass produce ceiling fans that are entirely made in the United States and that can be certified as such.

In fact, one of the most well-known ceiling fan brands, Hunter, used to be made in the USA but has moved their production overseas.

In addition, the Casablanca Fan Company also started out entirely based in the United States. However, it was bought by Hunter in 1996, so its productions were also moved overseas.

All of the fans made by Hunter and Casablanca are now produced in factories in China, and as of 2002, there are no more made-in-the-USA Hunter ceiling fans.

However, there is a possibility that you may be able to find an original, made-in-the-USA Hunter fan second-hand by searching on resale and thrifting websites such as eBay.

It’s important to note that anyone can sell anything on these types of websites, so when using them, I encourage you to do research to ensure you get what you’re looking for at a fair price.

What About Custom-Made Ceiling Fans?

If you are looking for a 100 percent guaranteed made-in-the-USA fan, purchasing a custom-made ceiling fan may be the best option for you.

Windmill Ceiling Fans is one example of a company that makes handmade custom ceiling fans entirely in the USA. You can also find them on third-party websites like Etsy.

There are many pros to a custom-made fan. You can ask for any design you want and you will get a high-quality, handmade item. In addition, buying one helps support a small business.

On the other hand, since they are handmade, they will likely be more expensive than a commercial product, and it will take longer to actually receive the item.

What Is the Trend These Days?

Over the last few years, it seems that more and more manufacturers, in general, have decided to try to move production back to the USA due to the global pandemic and other current events.

It is very possible that in the coming years, more products, including ceiling fans, will be made in the USA again. However, this will depend on the economy and changing trends in consumer behavior.

Ceiling Fans That Are Partially Made in the USA

While it isn’t likely you’ll find a mass-produced ceiling fan entirely made in the USA, some companies make ceiling fans that are partially manufactured in the US.

Alternatively, it could also mean that the parts of the product are made in other countries, but the final product is assembled in the US.

The following are several brands that make ceiling fans that can be considered partially made in the USA.

Matthews ceiling fans are assembled in the United States, and they contain some parts that are made in the USA as well. However, some of their parts are also made overseas.

The fan blades, motor castings, and steel housing are all made in South America in Brazil. These products are then shipped to the United States, where the rest of the fan is made and it will be assembled.

The parts are shipped to a manufacturing plant in Libertyville, Illinois, where an American-made motor is added, and the final product is assembled.

Marley ceiling fans are assembled in South Carolina. However, their motors and other parts are made overseas in Asia and Mexico.

In fact, the motors they purchase were once made in the United States, but their production has since been outsourced to the countries I previously mentioned.

There are many ceiling fan companies that are based in the United States and cater to the American market but do not manufacture their ceiling fans in the US at all.

Here is a short list of some brands that do this: 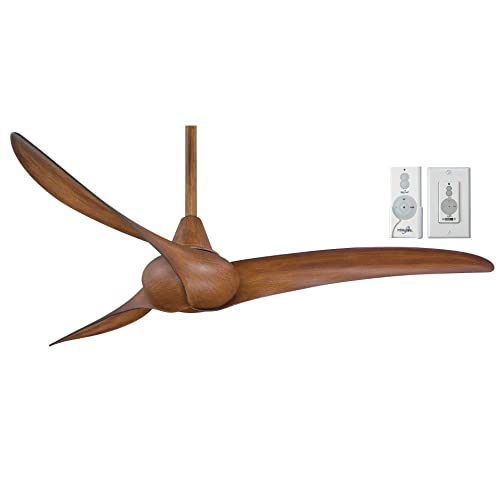 Why Do Manufacturers Move Production Abroad?

There are several reasons why most manufacturers choose to move their production overseas, and it all comes down to profit and having the lowest cost possible.

It has historically been much cheaper to pay people overseas for labor than it is in the US. In addition, the parts needed to make things are typically a lot less expensive in other countries.

Besides the lower cost of labor and supplies, the speed with which things are produced overseas is much quicker than it is in the USA.

All of these things combined make it easier for companies to produce large amounts of these products for a low cost and then ship them back to the US to sell for profits.