Popcorn ceiling is a home design trend that refers to a raised, dotted texture in the paint on ceilings. Historically, this design contained asbestos, a dangerous material to human health.

In this article, I will explain the history of asbestos in popcorn ceilings, as well as inform you about how this style is safely incorporated into homes today.

Contents show table of contents
It Is Illegal to Use Asbestos in Popcorn Ceiling
Asbestos Was Used in the Past
When Did It Become Illegal?
How Is Popcorn Ceiling Applied Today?
Sources
Was this helpful?

It Is Illegal to Use Asbestos in Popcorn Ceiling

Asbestos is a natural mineral made up of small fibers. When it was first discovered, its resistance to heat and corrosion made it a choice material with various purposes in the construction industry.

However, it has since been discovered that asbestos particles are extremely harmful to humans. For this reason, today it is a highly regulated material and its use is avoided.

When exposed to asbestos particles, the human lungs progressively lose function over time, which can lead to severe complications and even death.

There are several diseases associated with asbestos exposure, which include asbestosis (a severe chronic respiratory condition), lung cancer, swelling of the lungs, and mesothelioma (a type of cancer that affects the tissues surrounding internal organs).

It is estimated that asbestos kills 12,000-15,000 people each year in the United States, and about 90,000 each year across the world. However, it has been illegal to use for decades (more on this in a later section), so why are people still dying from asbestos exposure?

The answer to this question is the same as the answer to why asbestos was used in construction for as long as it was—the health effects are only seen years after exposure.

So, it took years before health authorities realized that asbestos was harmful and the people who are dying from asbestos-related complications were exposed years or decades ago.

There is also evidence that asbestos can be harmful to animals—there is evidence that pets can get sick and even develop cancer if they are exposed to it.

It can also pollute the environment. When asbestos is used, its particles can infect clean water supplies, remain in the air for long periods of time, and enter the soil in any given area.

For all of these reasons, asbestos use is now illegal to use and any existing asbestos in construction has to be removed methodically and carefully by the proper authorities.

In America, asbestos is regulated by the Occupational Safety and Health Association (OSHA), as well as Environmental Protection Agency (EPA).

Asbestos Was Used in the Past

Before we knew the dangers of asbestos, it was frequently used in the 1900s. The unique and desirable properties that the mineral possesses made it seem like a wonder material—a gift to the construction industry.

Along with being fireproof and unable to corrode, asbestos is strong, inexpensive, and can absorb sound well. These are all great qualities for building materials.

Chrysotile was the most commonly used type of asbestos. It was typically used in cement, bricks, and brakes due to its heat resistance.

Yet, asbestos became to construction what Thalidomyde became to obstetric medicine—a mistake that was only apparent when it was too late for so many.

When Did It Become Illegal?

Asbestos became illegal for use across the world at different times. Here is a short list of these dates for a few countries.

As a rule of thumb, if your home was built before the 1970s, there’s a good chance at least one material used in your home contains asbestos.

However, homes built in the 1980s or 1990s may also contain asbestos. When a material is used so extensively, a ban does not mean that manufacturing and use stopped the moment the paper was signed. The 80s and 90s represent a transition phase during which asbestos may have still been used.

This may have been by accident or necessity or by people who didn’t believe the reports of asbestos’ dangerous health effects, so they found loopholes or ways to continue working with asbestos off the radar.

From the late 1990s, the ban was more globally and successfully in place, so if your house was built after this time, there is little to no chance that any asbestos-containing material was used in its construction.

In this way, you can use the year your home was built to make an educated guess on whether or not your popcorn ceiling contains asbestos. This is important to know if you are trying to remove or cover your popcorn ceiling, but there are also other ways to tell. 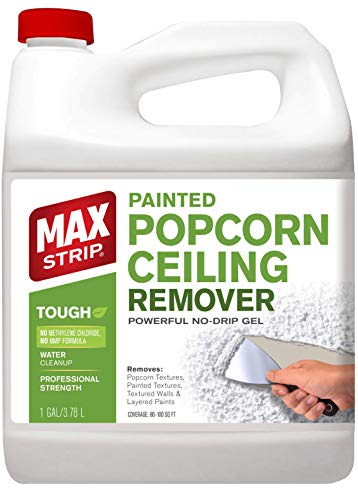 How Is Popcorn Ceiling Applied Today?

Nowadays, the popcorn ceiling style is still used. However, it is done differently than in the past to make it safe and asbestos-free.

Previously, asbestos was most commonly found in popcorn ceilings through spray-on paint. Now, sprays used typically contain calcium carbonate and polystyrene to give it the textured look.

Calcium carbonate is a natural substance—a mineral commonly found in limestone and animal shells. It has no known hazards to human health and is even used to help with heartburn and indigestion issues.

Polystyrene is used in popcorn ceiling spray to make up the raised bumps. It is a synthetic plastic, but it is (relatively) safe and a preferable alternative to asbestos.

Modern-day drywall is asbestos-free and uses alternative materials to achieve the same properties.