You would think that the efficiency of a ceiling fan, as far as it relies on the blades, would be represented by one design or at least a limited range. Furthermore, it would be incomprehensible for ceiling fan manufacturers to create and sell fans that don’t move air very well. Yet, there is such diversity in available ceiling fan blade designs.

It seems that all ceiling fan blade designs are effective at moving air, which is the primary function of a ceiling fan, but there are certain designs that do this more efficiently. Furthermore, as certain aspects of the fan change, it can influence what blade design is best.

Ceiling fan blade design and efficiency present a complicated relationship. However, in general, fewer, shorter, moderately wide paddle-shaped blades set at a pitch between 10°-15° and made from lightweight material will be the most efficienct design at a fixed motor size.

Contents show table of contents
What Is Considered a Good CFM Rating?
How Many Blades Is It Best to Have?
Ideal Blade Pitch
What Should the Length of the Blade Be?
Are Thin or Wide Blades More Efficient?
Does the Blade’s Material Affect the Fan’s CFM?
Sources
Was this helpful?

What Is Considered a Good CFM Rating?

CFM stands for cubic feet per minute. It is a measure of how much air is being moved by a fan over the course of a single minute.

Higher CFM means a greater capacity but when it comes to efficiency, you have to look at how much power the fan uses to achieve this air movement.

In order to be considered efficient, the fan must have an output of at least 75 CFM/W, but you get fans that pip 250 CFM/W and some that even exceed 400 CFM/W.

Below we will look at how all of these characteristics influence efficiency, and we will look at them in isolation for simplicity’s sake. In other words, we will assume all other efficiency-influencing factors are constant.

How Many Blades Is It Best to Have?

Overall, we can say that more blades mean more air is moved, but this is only true for a certain range of sizes. There is a point at which the number of blades becomes too great for the motor (which we are assuming remains constant) to move effectively and airflow production decreases.

Furthermore, if the motor size stays constant, then as you increase the number of blades, you make it harder for the fan to turn the blades. This means that they use more power per rotation. This means that increased airflow with increased blade number doesn’t linearly translate to better efficiency.

Basically, when it comes to ceiling fan blade number and efficiency, we have to take the Goldilocks approach. Not too many and not too few.

While true, the above information does not really help you when you are selecting a fan and are trying to choose the most efficient number of blades.

As far as the most airflow goes, four- and five-bladed fans have the highest CFM at 6,800 CFM. Three-bladed fans move, on average, 6,700 CFM.

However, if we look at the wattage taken to generate the airflow, three-bladed fans often come out as the most efficient, with an efficiency rating of around 248 CFM/W. 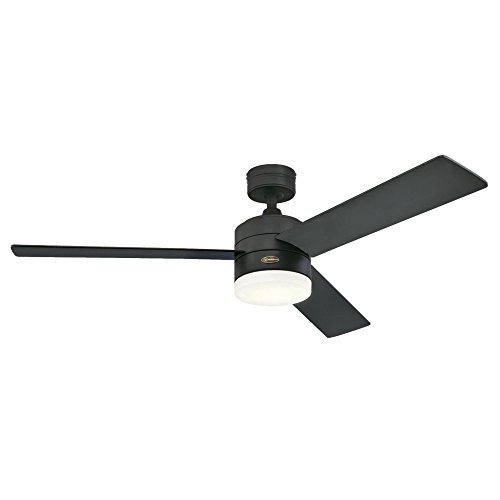 Despite their efficiency, though, three-bladed fans are much noisier than fans with more blades since they must spin faster to achieve higher airflow.

When a ceiling fan blade is very horizontal, there is little drag because the surface area having to move through the air is very small. At the same time, the surface area is so small that not much air is being moved by the blades.

By comparison, a fan blade that is very vertical generates a lot of airflow as it moves, but the drag increases, so the blades are harder to move.

In general, a higher pitch means higher airflow, but the efficiency is compromised after a certain point and the angle must be lessened to minimize drag.

This leaves us with a “sweet spot” range between 10° and 25°. Within this range, the ceiling fan’s dispersal area is what varies.

The lower pitches (10-15°) have slightly lower airflow but a higher dispersal area. This is ideal for residences.

On the higher side (25°), the airflow is slightly higher but is more concentrated and has a lower dispersal area. This is more ideal for industrial settings.

What Should the Length of the Blade Be?

In most situations, a shorter blade would mean a higher efficiency because the shorter blades are lighter and require less power for rotation. They also have a smaller surface area to produce drag.

Once again, there is a point where this statement is no longer true because if the fan blades get too small, the surface area with which they can move air is too small to make them effective.

It is true that increasing the length of ceiling fan blades increases the amount of airflow created. However, this relationship is strongly dependent on the motor size increasing to move these longer blades. Stronger motors pull more power, so longer blades tend not to be the most efficient option.

Two ceiling fan blade lengths that are the common are 42″ and 52″. If you would like increased airflow efficiency, the 42″-fan would be the wisest choice.

It is possible to shorten ceiling fan blades with the proper safety precautions. It can be a tedious and possibly dangerous process, but the airflow in your home can benefit from this if a shorter blade size is not available to you.

As far as what fan width is the best, there isn’t a straightforward answer for this one either. The best option for you largely depends on the other aspects of your fan.

Although it makes sense to say that wide blades are the best for airflow, if your fan already creates a large amount of drag, wide blades may limit the airflow efficiency by using too much power to run the motor and rotate the blades.

The best example of this is if your fan has more than five blades. The larger amount of blades would create more drag and wide blades would not be efficient in this scenario.

If your fan has less than four blades, wide blades could be a good option since the motor would not be as overloaded as it would be with more blades.

The option of what is the most efficient depends on the current load of your ceiling fan motor and how much more drag it can handle.

Overall, I would say that a moderately wide fan blade that is paddle-shaped would be an efficient design. 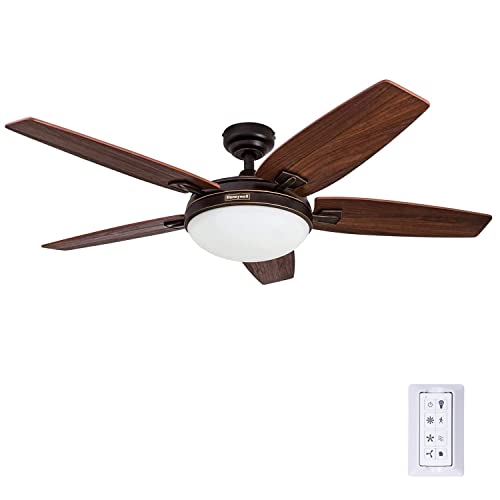 Does the Blade’s Material Affect the Fan’s CFM?

This is because, depending on the material, the ceiling fan’s weight will vary.

Although these weights don’t differ dramatically, a little difference can go a long way.

When weight is reduced from a fan, this takes a load off of the motor. This allows the motor to increase the fan speed and, therefore, increases airflow for the same amount of power drawn from the circuit.