If your ceiling fan is not doing its job, this may not be related to its quality, but rather its effectiveness in a larger space. A large, long, or high-ceiling room can pose problems for a single fan because the area receiving the most airflow from the fan is the area directly beneath it.

For multiple ceiling fans, they should be installed with at least 18" between the blades. Ideally, the space between the fans should be double the distance that each fan is from the wall that is closest to it.

Do You Need More Than One Ceiling Fan per Room?

It is usually only necessary to have more than one ceiling fan if the room in question is much larger than average rooms. Most fans have an estimated square footage for which they can provide ample airflow.

Once a room exceeds a fan’s suggested square footage, it may be necessary to get a more powerful fan or to purchase a second fan, depending on how much the ideal square footage is exceeded, and taking into consideration that bigger blades are not always better.

Another room that may require more than one ceiling fan is a long room or hall. This is because ceiling fans are made to produce airflow from a central place in the room.

Even if the hall matches the recommended airflow area for the fan, the length means that most of the space is not benefiting properly from the fan’s airflow. The furthest areas are harder to reach and just one fan may struggle to reach the far expanses.

High ceilings can also pose a problem for singular fans. With a ceiling fan further from the floor, its airflow is less likely to reach the occupied areas of the room. Another ceiling fan may be necessary to achieve the required airflow.

Instead of installing more than one fan, a dual ceiling fan might be the right fit for you. 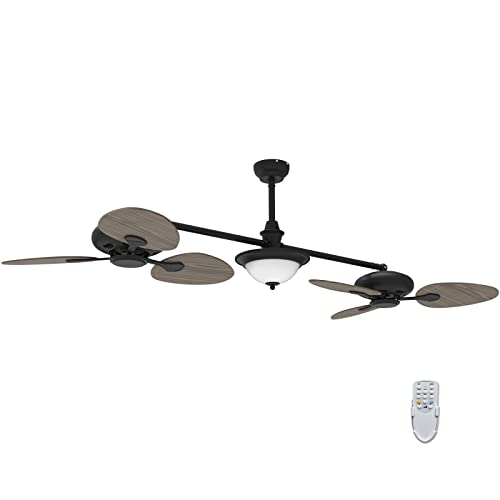 They can oscillate and rotate to ensure that air circulates through the entire space.

One benefit of using a dual ceiling fan rather than multiple fans is that it only requires a single installation. This can save time as well as frustration.

Because of their highly-effective air circulation, they are ideal for large rooms, whereas multiple ceiling fans are usually ideal for long hallways and rooms.

Size of the Ceiling Fan

Although installing another ceiling fan or a dual ceiling fan would certainly create more airflow in a larger, longer, or high ceiling room, it is possible that this problem can be solved with a differently-sized ceiling fan.

Although the volume of airflow depends solely on the motor of the ceiling fan, the length of the blades controls how the airflow is distributed and how direct it is.

Longer ceiling fan blades are ideal for large rooms since the greater surface area of the blades means that the airflow will be more spread out. This means that a greater area of the room will be impacted by this airflow but the airflow is softer and not as direct because of this. 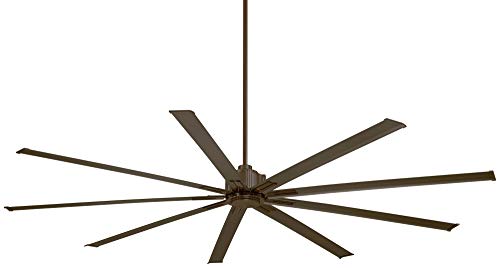 Size of the Room

As I mentioned before, each ceiling fan has a room area that is best suited for the airflow they produce.

Before you decide whether you should install another ceiling fan or a dual ceiling fan, it is important to consider the possibility that a fan type more suited for your room may be out there.

In order to determine what fan would be best for your room, precise measurements must be taken to get the square footage.

To do this, you’ll need a tape measure and possibly a partner to hold the other end so that you can get the most accurate measurements possible.

Measure the length and then the width of the room and multiply them together to get the area of the room in square footage, or whatever units you’d like to use.

Once the area of the room is known, you can research on whatever fan website you’d like.

Providing the Blades With Enough Room

If your ceiling fan isn’t operating at its best, the problem may be insufficient clearance from tall furniture or walls.

Some recommend that the edges of fan blades are at least two to four feet away from walls, tall furniture, and other ceiling fans.

At the very least, ceiling fans should be at least 18″ away from walls, tall furniture, and other ceiling fans.

Insufficient clearance would prevent ample airflow from reaching the entire room, with walls or tall furniture blocking the airflow from distributing properly.

If insufficient clearance is not the issue and you choose to install another ceiling fan, be sure to abide by clearance recommendations for the best use of this new fan.

Choosing the Right Ceiling Fan for Your Room

With the measurements you’ve taken, the table below can provide some insight into the room type, blade span, and CFM recommendations for the room you’d like to install a ceiling fan in.

In the case of installing just one ceiling fan, it is best to position it in the exact center of the room, if it is possible to do so. This is because the ceiling fan will be equidistant from each wall of the room, making airflow the easiest.

If a ceiling fan is terribly off-center, air will hit the closest wall and travel directly down, making this area of the room experience better and more secluded airflow. The opposite side of the room will experience diminished airflow, leading to poor air circulation in the entire room. You would most likely feel much cooler on one side of the room than the other.

With multiple fans, positioning gets a bit trickier.

For two fans, the ideal positioning would be the fans in a line parallel to two of the walls.

The fans should have the same amount of space between the two parallel walls. For example, the fans should be four feet away from the north wall and the south wall.

The same concept can be applied to more than two fans.

It is only changed by the fact that there is no longer a line of fans, but a triangle, square, or other shapes. The fact remains that ceiling fans should be double the length away from each other than they are from the nearest wall and centered as best as they can.