But is it more efficient to have dryers share a duct? Let’s take a look and figure out the best way to accommodate multiple dryers.

Contents show table of contents
Dryers Have to Have Independent Duct Systems
Reasons for Prohibition
Dryer Ducts Carry Lint and Heat
Exhaust Can Re-Enter Home Through Other Dryer
Ducts Would Need to Be Bigger
Ducting Can Run Parallel
Alternative: One Vented and One Heat Pump Dryer
Sources
Was this helpful?

Dryers Have to Have Independent Duct Systems

According to the International Residential Code (IRC):

“Dryer exhaust systems shall be independent of all other systems and shall convey the moisture to the outdoors.

Exception: This section shall not apply to listed and labeled condensing (ductless) clothes dryers“.

Dryer ducts must be regulated because they can easily turn into a fire hazard. Oftentimes, dryers are able to create fires due to lint buildup in the ducts. When the dryer is used, the hot air heats up the highly flammable lint, which can cause a fire.

This means that having two dryers on the same duct doubles the amount of lint present, making the dryers much more liable for starting a fire.

Another issue caused by multiple dryers sharing the same duct is the added heat.

Now, adding another dryer would not increase the heat in the duct. This is because the dryers would most likely be at similar temperatures, and, therefore, the overall temperature would not rise. However, the added heat source would still create another fire hazard.

Since hot air is coming from two sources instead of one, there is more hot air in the duct. This means that the air is not able to cool as efficiently. Therefore, the exhaust at the termination vent would still be very hot, which is potentially dangerous.

Exhaust Can Re-Enter Home Through Other Dryer

With a single dryer, the exhaust is channeled through the duct and outside safely. However, adding another dryer can create another channel for the exhaust to travel through.

This means that, if sharing a duct, one dryer can pump lint, moisture, heat, and toxic gasses into the other dryer and into the house. This poses a serious hazard to anybody living in the house, including pets.

Some of the harmful gasses that can be introduced back into the house are carbon monoxide (CO) and volatile organic compounds (VOCs).

CO is notoriously toxic and deadly. Exposure can cause dizziness, flu-like symptoms, fainting, and even death if exposed to enough. In addition, CO is odorless and clear and very hard to detect.

VOCs are also toxic to pets and humans. Exposure to VOCs can cause irritation to your eyes, nose, and throat. In addition, they can cause damage to your kidneys and central nervous system, and possibly lead to death. Some VOCs are carcinogenic.

This is why it is extremely important that dryer exhaust is channeled outside and not allowed to re-enter the house. Not only could it cause a fire, but it could also cause silent harm.

Ducts Would Need to Be Bigger

If you are planning to run multiple dryers at once (which is the reason you have multiple dryers), then the ducts would need to handle the combined airflow, which means that they need to be bigger.

Adding another source of airflow (a second dryer) to an efficiently running dryer-duct system would overwork the duct system. This means that the ducts would need to be larger to accommodate the combined airflow from both dryers.

If you did not increase the size of the ducts to match the doubled air volume, then you increase the static pressure in the duct. Static pressure can also be called friction or resistance. By increasing this force, you decrease the rate at which air is exhausted, which leads to all kinds of issues.

Having dryers share a duct is also unwise financially. Since you would need to upgrade your duct size, you would be spending more money to install it. You would also be using up more space. Therefore, if your goal was to save money or space, you would not be accomplishing that.

Therefore, having dryers share a duct is less efficient and much more of a hassle than having dryer duct systems independent of each other.

The better and easier approach to having two dryers would be to have two separate ducts. In addition, you do not need to find two separate routes for the ducts, as they can run parallel to each other safely. While you may need to insulate the ducting for the best results, it is much more cost-efficient and safe.

Alternative: One Vented and One Heat Pump Dryer

A possible alternative would be to skip the venting altogether with your second one and get a heat pump dryer.

Heat pump dryers do not use ducting and still work efficiently. Therefore, using one vented dryer and one heat pump dryer would mimic having two vented dryers without having to install another duct system.

You also get the benefits of both types of dryers.

From heat pump dryers, you get:

From vented dryers, you get: 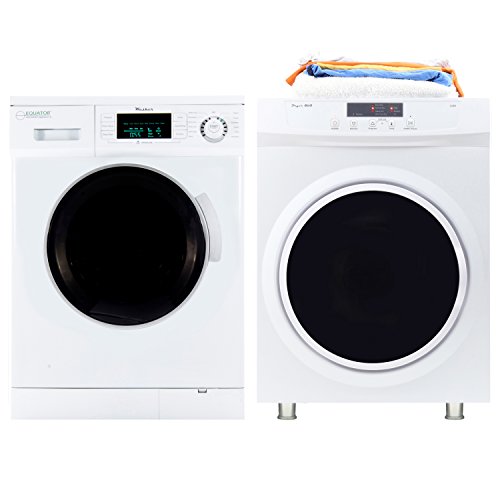 Both dryer types still have their drawbacks. For example, heat pump dryers are expensive to purchase and need to have the water emptied or drained. Vented dryers need to have duct maintenance and because they pull in new air from the house all the time, they are very hard on your HVAC system.

However, the drawbacks of one are counteracted by the benefits of the other.