When it comes to venting the plumbing system, location is important. The pipe needs to be out of the way but still accessible. It also needs to terminate away from areas where people would spend time because of the gases emitted.

The International Residential Code (IRC) regulates where plumbing vents and their openings can be. While they don’t explicitly say that soffit venting is permitted or prohibited, there are regulations that allow us to make inferences on this matter.

Plumbing Vents Can Vent Through the Soffit

Looking at the IRC, we can infer that you are allowed to vent a plumbing vent through the soffit.

If venting through a soffit was prohibited, this would not have been included in the IRC.

So, provided the plumbing vent termination is sealed properly and meets all the other IRC regulations for terminal plumbing vents, venting through the soffit is an option if you don’t want to or cannot vent through the roof.

The IRC sets out rules about where a plumbing vent can terminate over and above through the roof, wall, and soffit. These rules must also be followed.

So, there may be a few circumstances in which plumbing vents through soffits would violate the IRC because the following conditions are not met.

Vents Must Be 10+ Feet From Lot Lines

According to Section P3103.1.4 of the IRC, vent terminals extending from a wall must terminate ten feet or more from your lot line.

Ammonia and hydrogen sulfide, in particular, are highly toxic.

Sewer gases can not only be toxic, but they have a terrible stench to them as well.

At least one vent stack needs to terminate outside to ensure that this gas is not released into your home. However, it also cannot be released where it can enter your neighbor’s home or otherwise impact what they do with their property.

This is why this regulation exists.

Vents Have to Be 10+ Feet Above Grade

Section P3103.1.4 of the IRC also describes how vents must terminate ten feet or more above the highest grade elevation within ten feet of the surrounding horizontal area.

This basically means that, when you look at a ten-foot radius around your proposed vent point, no ground in that radius should be less than ten feet below the pipe.

If there are any knolls or slopes there, then either the pipe has to be extended higher or the system cannot vent there.

This is particularly important for houses that are built on a gradient or carved into a slope.

This regulation exists to allow the exhaust, which smells and is toxic and flammable, to dissipate as well as possible.

Let’s say that the pipe is surrounded on all sides by higher elevations. This would look like a much smaller version of a valley.

In this valley, sewer gas is expelled. Although some of it will rise due to its heat and dissipate, the airflow through this area would be limited. Thus, the “walls” of earth around the termination keep much of the gas trapped around the house.

This same section of the IRC notes that the pipe should not terminate under the overhang of a roof if there are soffit vents.

Now, don’t let this confuse you. The soffit vents referred to here are the passive vents that allow air to enter and leave the attic.

Obviously, if you have a pathway into the attic right where the plumbing vent terminates, you are going to get backflow of sewer gases into the attic.

The IRC does not specify how close the plumbing vent can be to a soffit vent. They simply say they cannot be in the same overhang.

Furthermore, the soffit vents are typically located on all sides of the house. So, if you have soffit vents, you will not be able to vent the plumbing vent through the soffit.

Section P3103.5 of the IRC prevents plumbing vents from terminating less than four feet below windows, doors, or air intakes. As you can image, having steaming sewer gas rising up to your bedroom window would not be very pleasant.

The vent needs to be at least ten feet to the side of these openings as well.

If the vent is located at least three feet above the opening, it is code compliant. The sewer gases are going to rise rather than sink, so this is why a lesser distance is required with this configuration.

Some air intakes that you need to look out for include those supplying the furnace, AC, heat pump, gas dryer, and gas water heater with fresh air for combustion or cooling.

All of these rules are in place to prevent plumbing exhaust entering the home and making people ill and causing a fire risk.

Venting Into the Soffit is Prohibited

While venting a plumbing vent through a soffit is allowed, venting it into the soffit is not.

The reason is that the soffit is considered part of the indoor space and unless you are going to be fitting an air admittance valve (AAV), plumbing vents cannot terminate indoors. 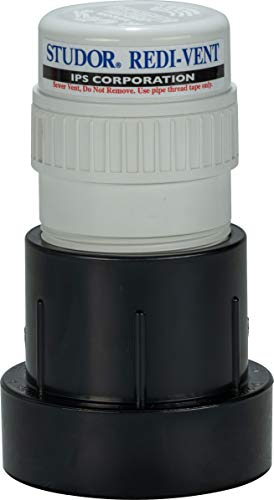 As mentioned at the beginning, at least one vent must terminate outdoors, so if we are talking about that one, then terminating the vent with an AAV in the soffit is not permitted.

If you were to vent the plumbing vent into the soffit, then the house, particularly the attic, would fill with sewer gases.

As the attic is often the hottest part of the house, combustion is a greater risk with flammable gases. The buildup of toxic gases can create a risk to anyone entering the attic. In addition, if enough gas builds up, it can infiltrate the living areas of the house enough to compromise health.