Between dryers, bathroom fans, range hoods, and the like, our roofs and walls are riddled with holes that increase the maintenance we have to do on the house. Having to terminate each plumbing vent through the outer structure of the house would only add to this homeowner’s bane.

Now, bathroom fans, dryers, and range hoods definitely cannot terminate into the attic, but you are in luck when it comes to plumbing vents—most of them, anyway.

Plumbing vents can terminate in the attic as long as they are fitter with air admittance valves and at least one of them terminates outside.

At Least One Vent Must Terminate Outside

According to Section P3102.1 of the International Residential Code (IRC), a minimum of one vent pipe should extend outdoors. This is typically known as the main vent, true vent, vent stack, or stack vent, and it is important for two reasons.

Firstly, the plumbing vents are there to provide air to the plumbing system to prevent airlocks and clogs. The best source of air is outside. Yes, there is air throughout the home, but it is not as fresh and in an airtight house, it can create odd pressure systems that affect the HVAC system, etc.

Secondly, the vents (the ones leading outside only) carry gases from the plumbing system and safely exhaust them outside, where they cannot pose a health risk as would be the case if the gas was allowed to enter the house.

Vents With AAVs Can Terminate in the Attic

“Individual vents, branch vents, circuit vents and stack vents shall be permitted to terminate with a connection to an air admittance valve.”

Furthermore, individual and branch-type air admittance valves (or AAVs) can only be used to vent fixtures on the same floor level and should connect to a horizontal branch drain.

A stack vent is a direct extension pipe that leads to outside air.

Circuit vents consist of a vertical vent that connects to a horizontal branch, to which between two and eight fixtures are connected into a circuit. This allows two to eight fixtures to be vented together instead of having a single vent for each one.

So, plumbing vents can terminate in the attic, provided they are equipped with an AAV.

What Are AAVs and How Do They Work

Air admittance valves are mechanical devices that allow one-way venting. Air can leave via these systems, but it cannot be emitted from them. 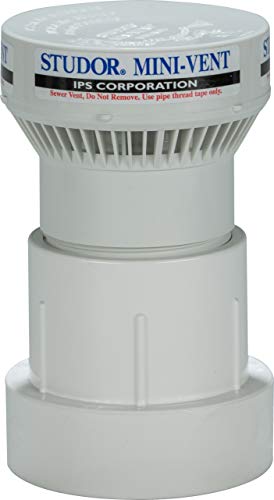 They are usually installed at the site of a plumbing fixture and can be used without connecting the fixture to a larger venting system.

This one-way venting effect is achieved through a rubber sealing mechanism, which opens to allow air into the drain system when negative pressure develops in the pipes as a result of water flow.

However, when there is positive pressure in the pipes or the pressure equalizes, the mechanism closes because of gravity, thereby preventing the escape of gases from the pipe.

Hence, AAVs can be used to ensure that vents that do terminate in an attic are not emitting the noxious gases that would pose health threats if they were released into the attic space, but air is still allowed into the pipe to allow for efficient drainage.

Must Be 6+ Inches above Insulation

Although AAVs are a useful way to allow termination of vents in an indoor space such as an attic, there are some regulations to consider.

AAVs need to be installed six inches or more above insulation materials within attics, and should be placed within the “the maximum developed length permitted for the vent”, as per Section P3114.4 of the IRC.

The reason for this is that AAVs need to be placed in an area where air can enter the valve freely. Installing one close to insulation could restrict airflow, thereby reducing the efficiency of the AAV.

Additionally, an AAV should be easily accessible to allow replacement when necessary.

Benefits of Terminating in the Attic

Drawbacks of Terminating in the Attic