The polybutylene (PB or Poly-B) piping boom began in the 1970s and spanned over two decades until the faults of the material were discovered. It was installed in millions of North American homes as a cheaper new material.

Polybutylene is no longer used in North American plumbing applications due to property damage caused by pipe leaks, though it’s still present in some homes and has uses outside of plumbing.

The use of polybutylene (PB) is not illegal or “banned” in the sense that it must be removed from all homes. However, in 2005, it was removed from the list of acceptable materials in the Canadian plumbing code. And sales to US markets ceased in the late 1990s.

The Life and Death of Polybutylene Pipes

Over the next two decades, many plumbers were using the less expensive and flexible polybutylene pipes in North America: in hundreds of thousands of homes in Canada and around 10 million US homes.

The death of polybutylene pipes began in 1995 with the class-action lawsuit Cox vs. Shell Oil Co. wherein an approximately 1 billion dollar settlement was reached in favor of the plaintiff. Around the same time, Spencer vs. Shell Oil Co. and Canadian lawsuits also were won in favor of consumers leading to larges losses by manufacturers.

The manufacture of polybutylene pipes for US markets ceased by 1998. Today polybutylene plumbing is still in use in some countries outside of North America, predominantly in Europe and Asia.

Changes to the Canadian Codes

Similar to the US, Canada saw a spike in PB pipe popularity for potable water systems during the 70s-90s. However, they were not used for continuous circulating hot water lines.

In response to lawsuits involving PB pipe, the National Plumbing Code of Canada removed PB pipe from its list of acceptable materials in 2005. This prevents the use of PB piping in homes built after 2005 since building codes don’t work retroactively. Homes built before 2005 with PB pipe already installed do not have to replace their piping to be compliant.

Not Banned in America

PB piping is not banned in the US as it is not against any building regulations. Currently, the International Residential Code (IRC), which is used in 49 states, still sees polybutylene pipes as an acceptable material. The 2021 list of acceptable piping materials, Table P2605.1, lists “PB pipe or tubing” as valid for plumbing applications.

However, because of the multiple lawsuits against PB manufacturers and billions of dollars lost by those companies as a result, polybutylene pipes are no longer sold to US markets. Even if they were still being sold, there wouldn’t be a great demand for them because of their high probability of failure after 10-15 years.

Similar to Canada, there is no penalty for having PB piping in your home (aside from any damage to your home or denial of coverage from your insurance provider).

Do Polybutylene Pipes Have to Be Replaced?

Polybutylene pipes don’t have to be replaced unless they are causing a health and safety threat. If they are properly functioning and were installed (for Canada) prior to the 2005 change in code, they aren’t breaking any regulations.

Homes built in the US after the 1995 lawsuits and homes built in Canada after 2005 are unlikely to have polybutylene pipes. However, if your home was built before these dates, you may want to check your plumbing and replace PB piping to reduce the probability of leaks and property damage.

Should You Replace Polybutylene Pipes?

It is a good idea to replace polybutylene pipes if they are in your home because they’re likely to cause leaks or pipe bursts and could lower the value of your home. It will save more money in the long term to replace them than to deal with the cost of property damage they’ll cause.

Polybutylene pipes can chemically react to the oxidation and chlorine in drinking water flowing through them, which leads to small deterioration on the inside of PB pipes. Over time (10-15 years) the corrosion leads to fractures and bursts in the pipes causing leaks or extreme water damage.

Besides structural water damage, leaking pipes can raise your water bill (possibly by hundreds of dollars per month) or encourage mold growth.

Some insurance providers may raise your rates or not cover plumbing-related incidents if your home has PB piping. For this reason, it’s worth it to replace the PB pipes in your home. Repiping your plumbing system can cost from $5,000 to $15,000. 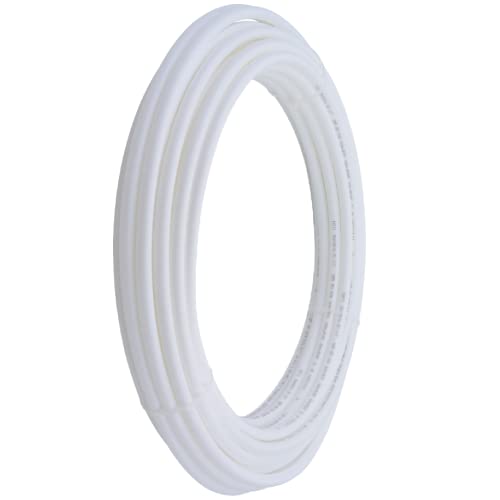 You can replace PB pipes with alternative plastic, such as PEX (amazon link) or PVC, or metal, such as copper (amazon link) pipes. Plastic piping tends to be cheaper but less durable when compared to metal pipes.

Polybutylene Is Still Used in Other Applications

Although it failed to work as an effective piping material, polybutylene has many advantageous properties that make it suited for other applications.

It can be used outside of potable water transport plumbing in water heaters, flexible packaging, pressure piping, and as an adhesive. You may have already encountered it in everyday items like plastic food or medical packaging and shoe soles.

Since the main issue was with chlorine interaction, polybutylene pipe can be used for other non-water piping needs. PB piping can be used in heating applications (underfloor or gas heating), often with an oxygen barrier pipe to prevent corrosion interactions with metallic parts.

A polybutylene relative, polybutylene terephthalate (PBT) is a polymer that’s used in electrical, electronic, and automotive sectors. It’s also used in food processing because it doesn’t absorb flavors or much moisture and is stain-resistant.