Popcorn ceilings are becoming dated and a thing of the past. There are a lot of options available to remove or cover up these acoustic ceilings—some easier than others.

While most methods of popcorn ceiling coverup are relatively easy, the easiest is going to be using decorative ceiling tiles. Below, you will see why I say this, as well as find information on the options, costs, and disadvantages of this technique.

The easiest way to cover up popcorn ceiling is to use light ceiling tiles and stick them on with an appropriate adhesive. It’s also often one of the cheaper options. If the ceiling contains asbestos, then this is not an appropriate covering technique.

Contents show table of contents
Use Decorative Ceiling Tiles
What Makes It so Easy?
How to Install the Ceiling Tiles
Tips for Buying Ceiling Tiles
Cost
Drawbacks
Lots of Ladder Climbing With One Person
Have to Apply Adhesive as You Go
Tile Materials Can Look “Cheap”
Can’t Use With Asbestos Popcorn Ceiling
Sources
Was this helpful?

Decorative tiles are the best way to go for covering up a popcorn ceiling. They’re easy to install and can come in any number of designs, materials, and styles.

What Makes It so Easy?

Decorative ceiling tiles are easy to use in covering popcorn ceilings because you are simply gluing them onto the ceiling.

Not only this, but the tiles are light and easy to move and handle. This means that the installation can be done by one person! A single person is able to comfortably handle the movement of the ladder, hauling tiles, and gluing them to the ceiling.

Additionally, the tools needed for such a job are easy to use and aren’t any sort of fancy, complicated, specialty tools.

Styrofoam ceiling tiles (amazon link) are best suited for popcorn ceilings, and also happen to be some of the most lightweight available. 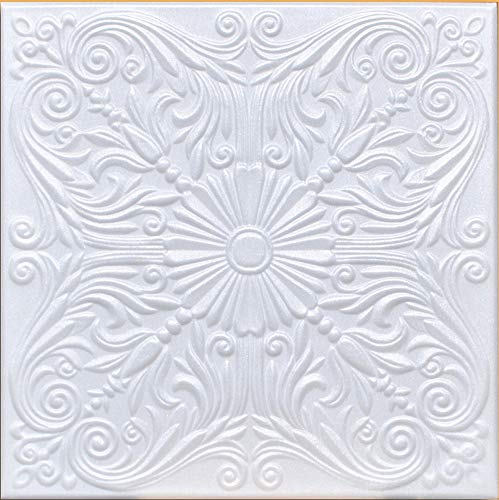 It is important though to make sure that the adhesive used is compatible with the particular ceiling tiles that will be used. Some adhesives may eat through styrofoam, for example.

Some sort of step ladder (or a regular ladder (amazon link) depending on the height of the ceiling) would also be necessary for the installation of ceiling tiles over a popcorn ceiling. Unless your ceiling is short enough or you’re tall enough that it can be reached by hand!

How to Install the Ceiling Tiles

There are some steps for installing ceiling tiles over a popcorn ceiling that need to be followed in order for the installation to be successful.

The ceiling should first be cleaned to at least remove the dust. This allows for the adhesive to be as effective as possible.

Next, the ceiling should be mapped out so that you know where the tiles will end up. At this point it should also be made certain that fraction tiles end up on the edges.

Then, adhesive should be put onto the ceiling and the tiles should be pressed into place.

The best way to know how to do this is by watching a video:

Ceiling tiles can be found online as well as at local hardware stores.

Popcorn ceilings are textured, which means contact with the ceiling tile is reduced because of the “valleys” that are present on the ceiling. These are points where the tile doesn’t touch the ceiling.

As said above, Styrofoam ceiling tiles are best for popcorn ceilings. This is because they are very light so not as much contact is needed between the tile, ceiling, and adhesive for the tile to remain stuck to the ceiling.

If you choose a heavier ceiling tile, you might need to use a more complex installation method.

When looking at ceiling tiles and what material they’re made of, one should consider the weight of the tile, ease of cleaning, and durability.

Decide what look you are going for, choose a lighter tile in this range of options, and get tiling!

Ceiling tiles can have a wide range of costs. Typically they cost between $6 and $8 per square foot but can even cost less than one dollar per square foot.

You need to balance cost against appearance and durability, as with anything else, but with such an easy installation, quick repairs are also not going to be too difficult.

The combination of ease of installation and cost should make ceiling tiles one of the most desirable ways to cover up a popcorn ceiling.

Lots of Ladder Climbing With One Person

If one were to install the ceiling tiles by themself, going up and down the ladder to reposition it and to get more tiles could become somewhat of a tedious hassle (and a workout!).

In order to be safe while using the ladder, the installer should not be standing on the top wrung or reaching too far. This then means that the ladder will need to be adjusted often.

The installer will also need to go down the ladder to get each tile as you can only take a maximum of two up at a time.

Have to Apply Adhesive as You Go

Another drawback to installing the ceiling tiles over the popcorn ceiling is that the adhesive must be applied as the tiles get put up.

An installer cannot coat the entire ceiling with the adhesive first (or put it on all the tiles laid out) because the adhesive would dry out and not function well, if at all.

Intuitively it may seem like covering the whole ceiling in adhesive first would save time and energy, but unfortunately this is not a viable way of doing the installation.

Not all tiles look overly pleasing and can come off as appearing “cheap” at times.

Styrofoam and polystyrene are especially susceptible to looking cheap. This is mostly due to the material they are made of, but this isn’t always the case.

Additionally, these two materials may not have a long “style life”. This means that they can become outdated relatively quickly and may start to look tacky. Again, this is not always the case though.

Now, do not despair as you can do a lot with a lick of paint. Alternatively, there are better options. But these better options almost always also mean an uptick in pricing.

Can’t Use With Asbestos Popcorn Ceiling

Installing ceiling tiles over a popcorn ceiling requires the ceiling to be touched a lot. This then allows for the release of asbestos dust, which can be a serious hazard for the installer and others in the area.

The installer is also incredibly close to the ceiling as they have to be within arm’s reach for the applying of adhesive as well as the sticking of the ceiling tiles.

Being so close to a ceiling that is being touched constantly increases the risk of inhaling the asbestos fibers that are coming loose.

Additionally, the seal between tiles is not airtight, which is the only way you can cover asbestos popcorn ceiling safely.

This means that asbestos fibers could still slip through the cracks and enter spaces where people are.

Asbestos has been linked with serious respiratory illness decades after exposure, so avoiding exposure to it should be of the utmost importance. Not just in a ceiling setting, but anytime there is construction that is known to contain asbestos.

In cases where the ceiling contains asbestos, covering it needs to encapsulate the ceiling.