It is funny to think that some rooms in a household have a story behind them. Something as small and as overlooked as a powder room and its evolution could be linked to some of the more noteworthy events in history and a strong contender for best rooms to remodel.

Let’s have a look at what exactly a powder room is, its evolution, its role in modern and older homes, and how it compares to a bathroom.

Powder rooms were so named from their original use in the 1700s as a place to re-powder wigs. The name also suited the Prohibition era adoption as a public room at speakeasies where women could relieve themselves and powder their noses. Today, they are often used as public or private guest bathrooms.

A powder room is essentially a minimalistic bathroom that consists only of a sink and a washbasin.

Normally designed for women, many have a feminine touch to their designs. It’s a space that is perfect when entertaining guests. They can go freshen up without having to walk through the entire home and one’s private spaces to do so.

Because of this, they are great additions to houses that have en-suite or Jack and Jill bathrooms instead of hall access bathrooms.

What Is the Typical Size of a Powder Room?

A powder room layout usually has the toilet against the wall and the washbasin opposite. These “half baths” can range from 11-12 sq. ft being the smallest size and up to about 18-20 sq. ft. Anything smaller will make it difficult for guests to move around and anything bigger may be against the city code.

History of a Powder Room

When Was the Term First Used?

The term was initially used in the 1700s when wealthy men with high societal status, and sometimes women, would break away from the company into private rooms within their homes where their servants would add fresh talcum powder to their wigs.

A good hairline in a man denoted wealth and for a man to be an upstanding member of society. However, the outbreak of syphilis caused sores and patchy hair loss, which led to the rise of fashionable wigs that were powdered to make them look whiter as the most expensive wigs were white.

When wigs quickly fell out of fashion and plumbing was eventually invented, these rooms slowly evolved into mini bathrooms that would make a comeback as a “ladies’ toilet”.

Interestingly, while these rooms were commonly known as and used as powder rooms back in the 1700s, the name only first officially appeared in print in 1927 during the Prohibition era, in reference to the ladies’ toilet.

The Prohibition-era occurred between 1920 to 1933 when the production, sale, and transportation of alcohol was banned across the United States. This prohibition was led by Christian groups with the aim of removing the problems stemming from alcohol consumption, including alcoholism and violence.

Where Was the Term First Used?

The term was first used in Europe, most likely in France as the powdering of wigs craze was brought about by King Louis XIV of France when he began experiencing hair loss at the age of 17.

Why Did They Call It a Powder Room?

I have already mentioned why they were called powder rooms in the 1700s, but the name stuck around, not because it was catchy, but because the prohibition era use of these bathrooms also involved powder.

Women during the Prohibition era would attend and be encouraged to visit discrete bars that sold alcohol illegally. These bars were known as speakeasies and, while they were encouraged to frequent these Speakeasies, women were not allowed to attend the bars completely.

The purpose of encouraging women to visit speakeasies was that it increased the number of men who visited the hideaways thereby leading to a rise in alcohol sales.

So, because these bars were male-only, they only had bathrooms available for men to use. With the increase of female presence in the speakeasies, bars quickly created a make-shift mini toilet facility with just a washbasin and a toilet, converting closets and small spaces for a woman to utilize.

But where does the powder reference come it?

Well, during these times, society frowned upon discussing or disclosing any information regarding one’s bowel movements, especially women. It was considered inelegant and distasteful. Thus, instead of ladies saying that they “need to pee” or “need to visit the toilet” they simply said that they need to powder their noses.

This was a much more acceptable way to excuse themselves from the company, and it was not a lie; they often did check and touch-up their make-up in these powder rooms.

Was It a Public or Private Bathroom?

Initially, a powder room was privately located within a wealthy man’s house or estate, but in the 19th, century it was mainly for public use within saloons and speakeasies.

Term Adopted From Public to Private or Vice Versa?

The term was originally brought about privately, and it grew on people’s lips to call these facilities powder rooms, and later during the Prohibition, this term was mainly for public use.

Who Still Uses the Term?

Nowadays the term is not used as often as it did before and is slowly dying out. Society in some countries is not as sensitive or bothered when a woman refers to using a bathroom or toilet. The idea that women are simply beautiful objects that don’t do anything else in a bathroom besides re-apply make-up has become old-fashioned.

However, there are still many ladies that use this term, more so by refined ladies of higher society.

It has broadened from only being a “ladies toilet” to a “half-bath’’ or guest bathroom in North America and a “cloakroom” in Britain. Some people refer to them as the “guest toilet” in their house, shifting the name to match the most common private use.

Where Are They Used Where Today?

Powder rooms are used in both public and private spaces. They are used in restaurants, bars, theatres, and hotels, especially in older public buildings. One may even be able to still find original powder rooms in bars or restaurants that were speakeasies during the Prohibition. 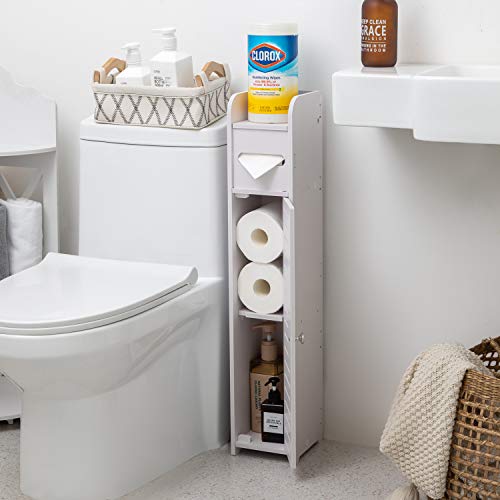 Before, powder rooms weren’t considered to be a glamourous amenity. But nowadays having a powder room (especially if it’s an older house) increases the value of your home and is one of the most remodeled rooms in a home simply due to its location and size; basically a designer’s dream.

It is purely there for guests when they need to wash up and so plenty of attention goes into the design of this room as it is one of the very first rooms guests see and use most often. It is also more affordable to add a powder room/ half-bath than it is to add an entire bathroom.

Differences Between Powder Room and Bathroom

The bathroom definition varies within the United States. In the US bathrooms are categorized as follows:

If you are interested in more bathroom history and terms, I have written a post on The Difference Between a Bathroom, Restroom, Washroom, Toilet, and Lavatory and another dedicated to washrooms alone.