Overall, having a ceiling fan in the kitchen can be a really good idea. There are drawbacks, like interference with gas stovetop flames and range hood extraction, but the benefits are often worth the inconvenience and fan placement goes a long way to minimizing the drawbacks.

Contents show table of contents
Pros of Kitchen Ceiling Fans
Counteracts Heat-Generating Appliances
Cheaper Than AC
Helps to Disperse Smoke and Odors
Keep Flies off Your Food (Depending on Placement)
Bonus Lighting
Cons of Kitchen Ceiling Fans
Can Affect Range Hood Effectiveness
Grease Can Build Up on the Fan
May Extinguish Gas Stovetops
Increased Injury Risk When Above a Countertop
Ingredients and Recipes Can Be Blown Around
Was this helpful?

We know that the kitchen is a hub of heat. Whether it is the oven baking your cookies or the stovetop warming up milk on a sleepless night, the room can quickly become quite stuffy.

Having a ceiling fan in the kitchen can allow the warm air to be dispersed around the room. The air around the heat-generating appliances (where you are typically standing as well!) won’t be as hot, and you will, in general, feel more comfortable while you cook in the kitchen.

As we know, all of the heat generated in a kitchen can become quite uncomfortable. If you were to run your AC in this room to try and counteract this heat, it would be especially costly.

You will constantly be adjusting your thermostat lower and lower as more appliances are switched on and as the temperature outside increases as well. Running your AC at lower temperatures forces it to work harder to cool the air faster, which will cost you a pretty penny.

Ceiling fans are extremely cheap to run in comparison. You do have to be under the fan to have the cooling benefit, but it’s very workable as it will probably be installed over the areas where you are likely to be—over the kitchen table or near the oven/stovetop.

Helps to Disperse Smoke and Odors

A kitchen ceiling fan will not only keep you cool as you cook or eat dinner, but it can also help to get rid of odors and the evidence of your poor, smoking cupcakes! (We’ve all been there).

The airflow created by the rotating ceiling fan blades will allow the odors and smoke that you may have created as you cook to disperse through the room faster, being diluted as they spread.

There is no need to worry that your dinner guests will know that you burned the first batch of lasagna before you ran to the store and replaced the ingredients and tried again. Simply switch on your fan for at least an hour and open your windows to allow the smell to be removed quickly and efficiently.

Keep Flies off Your Food (Depending on Placement)

There are few things worse than trying to enjoy a nice meal—that keeps getting interrupted by a couple of flies that just won’t be deterred by your continuous hand flapping.

Having a ceiling fan directly over the area that you eat will allow the air to flow continuously—mimicking the current created by hand swatting but to a much larger degree and more effectively.

You will then be able to use both your hands to eat as your fly problem will be long gone.

It’s also really beneficial if you have a counter covered in prepared or unprepared food but you need to turn your attention to actually cooking or you need to leave the room. Turning the kitchen ceiling fan on, will stop the flies from sitting on your food.

Placement is important because it is the force of the flow of air that keeps the flies at bay. The most effective airflow is going to be right underneath the fan.

A great bonus that comes with most ceiling fans is the light fitting installed in the center of the fan, below the blades.

As lights and ceiling fans usually vie for the central spot in a room’s ceiling, having the two together makes a lot of sense and you get the benefits of a ceiling fan without giving up the lighting. 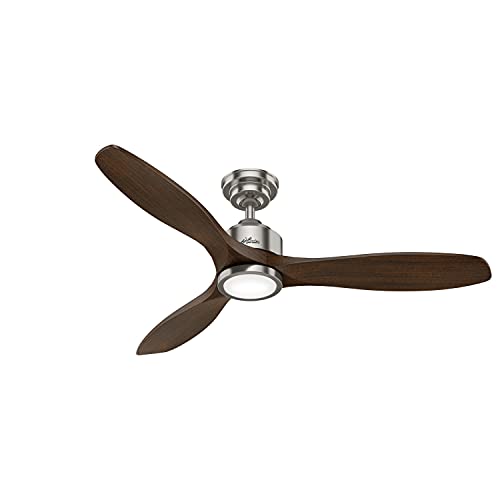 The Hunter Melbourne Indoor Ceiling Fan (amazon link) provides you with various lighting options that are remote-controlled, so you have the choice of how light or dim you want the room to be.

A range hood is a vital component of a kitchen as it removes any grease, fumes, and steam in the air that is created when the stove or oven is used. It also makes the space cooler by removing excess heat created by some kitchen appliances.

However, when you have a ceiling fan running at the same time as your range hood, your range hood might not perform at its best. Since the ceiling fan will be circulating the air around the room, the grease and other particles will not rise up to the range hood to be extracted like they normally would.

The range hood does not have enough power to vacuum in grease from all the way on the opposite side of the room. Therefore, your kitchen won’t be rid of the heat, odors, or grease that have been created.

Placing the fan further from the stove/oven can minimize its impact on the range hood but this placement does also have drawbacks.

Grease Can Build Up on the Fan

We all know just how messy our stovetop gets when we make a meal—especially when frying greasy food. Luckily, the mess can be easily cleaned up with a kitchen cleaner of choice and your stovetop looks as good as new.

This is not something that one will readily notice, which means there will be quite a build-up once you get a step-ladder for your monthly cleaning. A lot of people advise using Windex on a cloth to easily wipe away the grease.

Having a gas-powered stovetop is really beneficial if you want to reduce your electricity bill. It will also ensure you will be able to cook your family a warm meal even if your electricity gets cut off for some reason or another—provided you have a continued supply of gas.

Gas stovetops have a visible flame that extends underneath the plate. This flame is made larger or smaller depending on your required heat level. However, when the kitchen ceiling fan is on, you may find yourself having to relight the stovetop numerous times because the flame becomes extinguished by the air movement.

Increased Injury Risk When Above a Countertop

Kitchen ceiling fans don’t really seem all that dangerous upon first inspection, but it all depends on their exact location, and if there are other pieces of furniture near them.

For instance, if you have shelves on your wall or floating cabinets, you have probably found yourself climbing on the countertop to reach what you need to. If the ceiling fan is directly above your countertop, you may be at risk of knocking your head on the moving, or stationary, blades.

If this is the case, avoid letting your kids climb the counters as well to avoid any risk of injury to them as they will be quite close to the blades when standing up.

Ingredients and Recipes Can Be Blown Around

Picture this. It is the beginning of July and you are starting to get all the delicious treats and meals ready for your family’s annual Independence Day party. You have your recipe book open to your grandma’s famous casserole, as well as a few loose pages of recipes you printed off of the internet.

You decide to put the fan on to keep you cool while you cook up a storm, and you end up with recipes on the floor and in the food.

A kitchen fan on high speed can cause a strong current that will blow the pages of recipes around the kitchen as well as some light ingredients. You may be cooler but your kitchen is now an absolute mess.

The kitchen is one of the best rooms in the house in which to install a ceiling fan. You can read in my article on What Rooms Should Have Ceiling Fans for some other rooms that would benefit and a list of those that would not.