Growing up, I only ever heard about duct tape being the most reliable and best tape out there. Imagine my surprise at finding out that Gorilla tape is actually better! Gorilla tape isn’t just better in one category, either. It pretty much sweeps the board as to why it is better than duct tape—generic duct tape, at least.

Gorilla tape is twice as thick as generic duct tape. This makes it harder to perforate and better able to resist forces like weight and stretching. The adhesive is thicker, making the bonding capacity greater. The tape is also more heat-resistant.

This means that Gorilla tape is harder to rip and perforate than even the thickest (and therefore strongest) duct tape. Being harder to perforate is an advantage for Gorilla tape because it means it is more durable and will last longer when used on things that twist and move a lot.

Twisting motions tend to cause rips (think to yourself how you rip pieces of tape off from the roll), so when Gorilla tape is used on things that move around a lot, it will last longer. A longer-lasting piece of tape is certainly the most desirable, so Gorilla tape has an edge here.

While this also means it might be more difficult to tear off pieces of Gorilla tape compared to duct tape, this shouldn’t stop one from valuing Gorilla tape over duct tape. After all, all you need is a pair of scissors and that problem is readily solved.

Gorilla tape may be overkill in some situations where such a strong tape is not needed, but wouldn’t you rather have too much tape than not enough?

Gorilla tape’s greater thickness also means it has better force resistance, and as such, Gorilla tape gets another check in the advantage column.

Force resistance is valuable because it means the tape won’t come apart when being stretched or pushed on. For example, a piece of paper has pretty low force resistance as it is fairly easy to pull it apart or to push your finger through it.

As Gorilla tape resists this, it is more versatile and able to be used in more dynamic and stressful situations. It also means that the tape is better at bearing weight. If you had a cloth grocery bag and the handles ripped, Gorilla tape would do a better job of reattaching the handles to the bag.

This is because the tape is better at resisting the weight of items in the bag. Once repaired, that bag could be loaded with plenty of groceries and the tape wouldn’t falter. On the other hand, it is less sure that duct tape would maintain the fix.

The strongest Gorilla tape can hold around 60 pounds, with an increase of one pound for every two inches of tape (for the heaviest tape). Military-grade duct tape can only hold around 40 pounds.

Gorilla tape also has stronger bonds than duct tape. This is because Gorilla tape has a double layer of adhesive, which greatly improves its stickiness. Although, this does come at the cost of leaving behind more residue.

This improved stickiness over duct tape also gives you less of a chance of having to remove the tape, and, therefore, seeing the residue. Gorilla tape is essentially twice as sticky as duct tape, so while there might be more residue, there’s less of a chance that the tape will come off or need to be replaced.

Better stickiness is one of the main factors that push Gorilla tape ahead of duct tape. Tape is meant to stick to whatever it is used on, so whichever tape does that the best will already be leaps and bounds above any that are less sticky.

Gorilla tape’s thickness also makes it more heat-resistant. Its heat resistance is also improved by a higher-quality shell (the non-sticky side of the tape). This, again, makes Gorilla tape more versatile than duct tape. 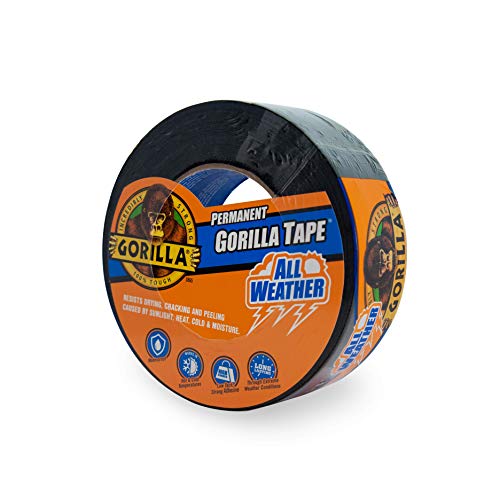 Having a higher heat resistance allows for Gorilla tape to be used safely in conditions that duct tape could not be used in.

There are also no drawbacks to having a higher heat resistance, unlike the other categories, which had some sort of trade-off.

Heat resistance isn’t only related to combustion either. While this is relevant, a higher heat resistance also means that the tape will stick better in hotter areas and will last longer in such settings.

High levels of heat can melt the adhesive too. But because of the double layer of adhesive on Gorilla tape, more heat can be withstood before all of the adhesive has melted off and the tape no longer sticks.

Tape that lasts longer and sticks better is certainly the most desirable. So, Gorilla tape would be much more desirable than duct tape when heat is being considered.