While they’ve been around for a short while now, retractable ceiling fans are starting to pick up speed in the home improvement realm. They’re certainly appealing, with their sleek, unique designs and the almost futuristic addition of their hidden blades. But they are an investment.

As they are an investment, you want to make sure that you are getting your money’s worth. That’s what I hope to establish in this article. So, let’s get stuck in!

The vast majority of customers seem to be happy with their purchase. Retractable ceiling fans are effective at delivering good airflow, which is the primary purpose of the units. They are great for small spaces and people who prefer an open ceiling look.

Looking through customer reports, it seems that airflow is rarely ever a problem with retractable ceiling fans. While there are complaints about other issues at times, which we will discuss below, the ability of retractable fans to move air does not really come into question.

This is interesting to note since, after seeing how short the blades are, the airflow of a retractable fan is likely to be one of the first questions a person has. At least, I know that was my first question!

The reality is that the small size of the blades does not have a negative impact because of the way the fans are structured.

The blades, while small and curved, are pitched—or angled—in a way that allows them to effectively work with the speed of their rotation alongside their shape to “scoop” and push air.

Traditional ceiling fans usually have straight blades, and similarly, they are pitched to work with the size and shape of these blades.

Regardless of what type of fan you have, it is designed with the power of the motor, the aerodynamics of the blades, and other factors in mind. As long as a fan is in operable condition, it should provide airflow just fine whether it is retractable or not.

Most Common Complaints With Retractable Fans

Before you read this, remember that most people consider the fans to be worthwhile because they carry out their primary function (airflow) effectively.

Installation Can Be Difficult

While retractable ceiling fans might be effective at cooling you down, it seems that getting them set up in the first place can be a struggle. In fact, this seems to be the most common complaint!

Not only are retractable ceiling fans more complex in the first place due to the manner in which they work, but it seems that installation instructions can be insufficient.

Several customers on various fan models have described difficulty or frustration with the instructions, assuming there are instructions for certain parts to begin with.

Additionally, it’s not uncommon in critical reviews to see issues with having parts on hand. Missing screws or wire nuts seem pretty par for the course.

Even when all the parts are included, installation may require troubleshooting. Some fan models are not made to fit traditional mounting boxes, and will require attic access. Other times, parts may be ill-fitting and require roundabout assembly methods.

Lighting Is Not Always Great

Interestingly enough, while the more complex fan blades of retractable fans rarely seem to have issues, the light function does seem to suffer at times.

Some customers claim they bought their fan primarily for the lighting, with the fan function as more of an afterthought. That makes sense, given the blades’ ability to hide away, but as such, it’s disappointing when the lights don’t work!

Depending on the model, there have been complaints about the internal, magnetic lights falling off inside the unit. Others state that their bulbs keep coming loose and speculate these issues are due to the high motor speeds wiggling them loose in addition to a lack of proper security.

As well as this, complaints about brightness almost always seem to relate to the lights being too bright! While some models have dimmable options, others don’t, meaning you may be left with a glaringly bright room.

Operation is Not Effective

Lastly, you’ll want to make sure that you look into your fan’s controls before purchasing.

There have been some reports of certain models having rather ineffective settings. It may be necessary to cycle through various fan or lighting settings every time you turn the fan on as some retractable fans do not save their last-used setting.

While it doesn’t take too much time, having to expend the effort of memorizing the desired settings and cycling through them can be rather annoying at times. This is especially true if you’re someone who values efficiency!

When Are Retractable Ceiling Fans a Good Option?

At this point, it may not seem like retractable fans are a great option. But remember, these are just the common complaints about retractable fans. The general consensus still seems to be quite positive!

That said, there are only two major benefits retractable fans have over traditional ceiling fans.

For starters, retractable ceiling fans are best suited to small spaces. If you’ve got a room you want to get some airflow in, but it’s rather small, having a traditional ceiling fan can eat up the entire ceiling space. In some cases, a traditional fan may not fit at all!

The second reason is really just aesthetic. Along the same lines of being “suited to small spaces,” retractable ceiling fans take up far less room. Visually, this can make a space look much bigger thanks to a retractable fan’s ability to tuck its blades away.

To conclude, if you’ve got a small room you would like to install a fan in, a retractable ceiling fan is your best bet.

Alternatively, if you simply cannot stand the look of fan blades and want to make a room feel bright and open while still keeping the practical function of a fan, then you may prefer a retractable one.

For a more detailed look at the pros and cons of retractable fans, be sure to check out this post!

If you’re just after a quick summary however, here are the key points:

What to Look for in a Good Retractable Ceiling Fan

Given that the most common complaint seems to be about difficult installation, you’ll probably want to consider searching for a fan that’s easy to set up from the get-go. At least, if you’re planning to set it up yourself, that’s probably the safest option!

You might want to look at this FebFurniture 36 inch Retractable Ceiling Fan (amazon link). It comes pre-assembled, meaning no messing around trying to attach the blades, and an easier installation overall. On top of that, many customers speak highly of its airflow capabilities. 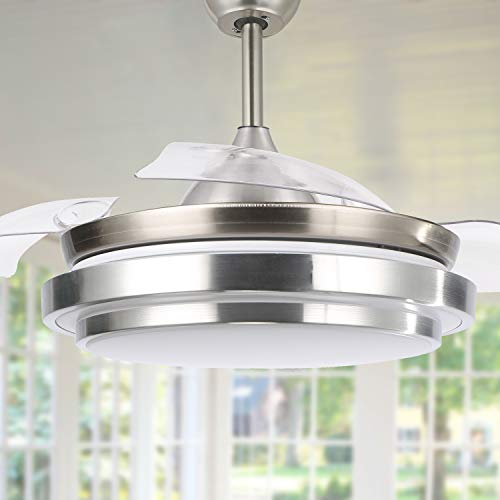 Now, it’s hard to find a fan that has absolutely no negative reviews—someone is bound to encounter a defect or difficulty at some point. That’s especially true for retractable fans, which are a newer development.

If you’re particularly concerned about potential fan difficulties, you’ll want to look for a fan that comes from a company with great customer service or a good refund policy.

This DINGLILIGHTING 42 inch Retractable Ceiling Fan (amazon link) is quite highly regarded, with customers reporting that they are pleased with both the lighting and the airflow. Although it appears to be a bit difficult to install, this fan does come with a 60-day refund and a 1-year guarantee for quality assurance. 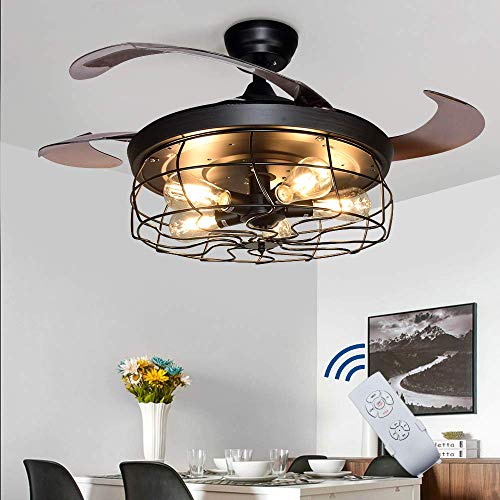