Those stifling hot summer nights can ruin just about anyone’s good night’s rest. Turning on the ceiling fan and feeling the air being pushed down on you is a sure way to cool your body down and allow you to get some beauty sleep.

However, some may be afraid to keep their fan running the entire night. Like all electrical appliances, long-term running of ceiling fans does increase the risk of overheating and fire. But, as you will see in this article, overnight usage is not considered long-term running when it comes to ceiling fans.

In general, it is safe to leave a ceiling fan on overnight. However, it is essential to keep the fan clean and well maintained. It is also advised to set it to a slower speed. Most ceiling fans can safely run for at least 8 hours, but it is best to consult the manual to find out the exact time.

Contents show table of contents
Ceiling Fans Are Designed to Run for Long Periods
Don’t Leave the Fan on in Empty Rooms
Will the Fan Overheat?
Safety Tips for Leaving the Fan on All Night
Use a Quality Fan
Ensure the Fan Is Properly Installed
Don’t Leave It on the Highest Speed Setting
Care for the Ceiling Fan According to the Manual
Sources
Was this helpful?

Ceiling Fans Are Designed to Run for Long Periods

Ceiling fans are created with the purpose of running for a prolonged time. It would be quite pointless for a fan to only be able to run for a couple of hours, leaving you to suffer in the heat for most of the day or during your hours of sleep.

If you think about it, you might keep your ceiling fan running in your office or living room from the moment you wake up to just before you go to bed.

This could make up a good 10 or so hours, and although every model is different, most fans can run at least 8-10 hours without any issues. Leaving your ceiling fan on all night should, therefore, pose no significant danger.

Sleeping with your ceiling fan on for 7-9 hours is really not that different from leaving it on all day, and it is no more dangerous whether you leave it on in summer or winter mode. 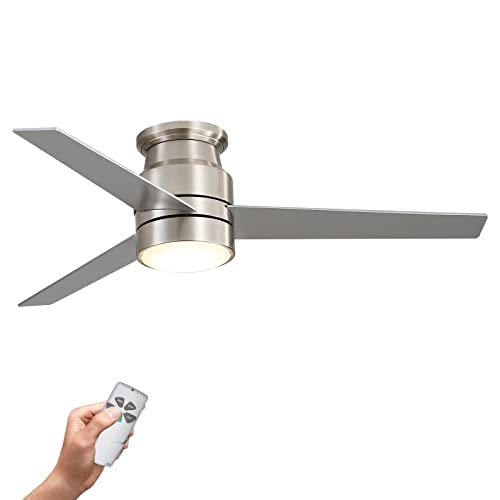 Don’t Leave the Fan on in Empty Rooms

If you want to keep your ceiling fan running all night, ensure it is in a room you will actually be in for that time period, such as your bedroom. This is not because of any potential danger to you or your home, but because it is essentially useless if no one is in the room.

Ceiling fans don’t actually create cool air; they only move air. The cool feeling you experience is a result of the wind chill effect—the lowering of body temperature due to the movement of air on it.

Having the fan running in a room you’re not in is pointless as it won’t be making the space any cooler—it will simply be hiking up your electricity bill.

Will the Fan Overheat?

If you’ve ever placed your hand on the motor of your ceiling fan after it was running for a good number of hours, you might have noticed that it was extremely hot. Some AC motors even get as hot as 160 °F!

You may, therefore, be worried that if you leave your fan on all night, it can start a fire.

The good news is that the risk of a ceiling fan fire is quite small. Newer fans even come equipped with a thermal fuse that, in order to prevent ceiling fan fires, automatically cuts off the power to the fan if the temperature reaches about 260 °F.

However, if this fuse is faulty or if your fan is extremely old and lacks regular maintenance, then the risk may be slightly higher. Nevertheless, leaving your ceiling fan on all night should pose no significant danger.

Safety Tips for Leaving the Fan on All Night

When leaving your fan on overnight, you are not only leaving it on for a long time but also without anyone that can keep an eye on it and ensure the fan is running correctly and safely.

While there is essentially no risk involved in doing so, it’s still advisable to take some safety precautions.

Use a Quality Fan

Just like with most things in life, you pay for what you get. Getting a good quality fan may be more expensive up front, but these fans have better motors that can run for longer.

This means that they won’t heat up as quickly because they were designed to run for longer periods of time without compromising the fan’s safety.

A poor-quality fan may overheat a lot faster as the motor may not have sufficient power to run for as long.

Ensure the Fan Is Properly Installed

You may have noticed that if a ceiling fan is running for a while, or at high speed, it may start wobbling. This might instill fear that the fan can come loose and fall while you’re asleep.

Ceiling fans also need to be wired, and any fault in the wiring is technically considered a fire hazard.

Ensuring the fan is tightly secured to the ceiling and properly wired is vital for the correct functioning of the fan and the safety of your family. It might be a good idea to have the fan installed by a professional if you don’t feel up to the task.

Don’t Leave It on the Highest Speed Setting

We have already discussed that ceiling fans can heat up to quite a high temperature, especially when set to high speed. Even though the chance your ceiling fan will start a fire is slim, it is not completely impossible.

While running your fan overnight, it is advised to leave it on low speed as high speed would cause the motor to work harder, making it heat up quicker. Considering that the high speed function is generally considered to be less comfortable to sleep with, this is not necessarily a hardship.

Care for the Ceiling Fan According to the Manual

If you make a habit of leaving your ceiling fan on overnight or for the entire day, the fan’s components (such as its bearings) can wear out more quickly due to their frequent use and increased friction.

In order to ensure your fan always runs at its best and to limit the possibility of it malfunctioning, make sure that you carry out proper maintenance on it.

It goes without saying that you should always keep the fan clean and make sure its parts (such as blades or light fixtures) are not loose.

On top of this basic maintenance, you should consult the fan’s manual to find out whether it needs oiling or anything else and how often it’s required.