Home appliances do not come cheap, with some devices running into thousands of dollars. So, it’s always great to discover ways to purchase quality appliances for bargain prices. However, when you buy these devices, there’s always the risk that your “good bargain” is actually too good to be true.

Most people consider scratch and dent items to be worth the savings. Discounts of up to 60% can be found, and the damage can be easily repaired at home or hidden. Scratch and dent appliances are always fully functional, and most come with a warranty.

What Are Scratch and Dent Appliances?

In the retail industry, scratch and dent is a label that’s placed on appliances that have cosmetic defects.

Scratch and dent appliances are completely new and are always in perfect working condition. The damage, if you could call it that, is usually superficial and not mechanical or functional.

Manufacturers and appliance vendors strive to provide customer satisfaction. So, whenever defects like‌ dents, bumps, and scratches are spotted on products, they are usually down priced and sold as scratch and dent appliances.

The damage is usually sustained during shipping or the warehousing process and not during manufacturing.

These damages can be minor, like a scratch on the body of the appliance or they could be more serious (but still only aesthetically), like a deep dent on the product.

Damage to the packaging can also qualify an appliance as scratch and dent.

The discount rate wouldn’t be the same for every item. The typical discount on scratch and dent appliances is between 15% to 50% of the original retail price. Sometimes, you can even find items with a discount rate of up to 60%.

The amount that’s deducted is usually based on a couple of factors:

Scratch and dent appliances are a great way to save money, especially if you are trying to purchase multiple devices and are tight on cash. Here are some of the reasons why many people consider them worth the savings.

Appliances that are sold as scratch and dent aren’t used or returned by a customer due to faults. They are brand new devices that work perfectly.

The only difference between them and regular appliances is that they feature some sort of aesthetic defect. They are just as likely to malfunction as a device without the external defects.

Faulty appliances cannot be classified as scratch and dent, so if your fear regarding purchasing scratch and dent devices is that they wouldn’t work as well as regular purchases, then be assured that’s not the case.

If you are someone who likes to save, like me, scratch and dent deals allow you to buy top-quality devices at bargain prices.

You can also get discount deals on floor models. However, unlike scratch and dent appliances that still have their packaging intact, floor models are left out in the open, and appliances like TVs are sometimes plugged in.

This can reduce the lifespan of the device, but with scratch and dent appliances you get a device that has not been used or exposed.

Damage Can Often Be Repaired/Covered Cheaply

In many cases, you can fix the damage or at least improve the appearance of the appliance through easy DIY activities.

How to Remove Scratches

A sure way to remove scratches is by applying appliance touch-up paints (amazon link). Touch-up paints are thicker than regular paints and easily fill the indents caused by scratches.

For uniformity, ensure that you purchase a touch-up paint that matches the color of your appliance.

To fix the scratch, you simply have to follow the manufacturer’s instruction on how the apply the compound and then leave it to dry overnight. If you aren’t satisfied with the smoothness of the surface, you can wet sand it using sandpaper until you achieve your desired result.

Alternatively, you can cover the scratch with appliance cover stickers (amazon links) and no one would ever know that there is something wrong with the surface underneath.

How to Fix Dents

There are different approaches to removing dents. Here are some you can try: 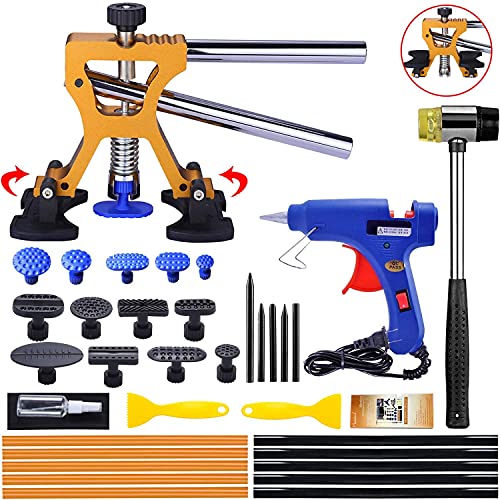 Most Still Have a Warranty

Scratch and dent appliances usually include some sort of warranty. In most cases, they are covered by the original manufacturer’s warranty or one provided by the dealer. You would also be given the option of purchasing an extended warranty.

However, not all items come with a full warranty because some manufacturers only provide a limited warranty for scratch and dent appliances.

Appliances typically come with a one-year warranty so that’s what you should expect if you are given a full warranty.

Where you purchase the appliance plays a huge role in whether you get a warranty or not.

If you buy directly from the original retailer or from a reputable dealer like Sears Outlet, you would most likely get a full warranty. But if you purchase the device from a small-scale private retailer the device might not include a warranty.