There are many factors to consider when buying a ceiling fan, but one of the most important is how well it facilitates airflow. In addition, regardless of what fan you buy, there are ways that you can maximize or compromise airflow. The 8 determiners of ceiling fan airflow presented below do not exist in isolation. They all work together, impacting each other positively and/or negatively.

A ceiling fan’s motor capacity is measured by CFM (cubic feet per minute). So, this is quite literally how much air a fan can move in a minute.

Generally, as the motor capacity increases, so too does the fan’s ability to move air.

This is because the blades can rotate faster, generating more airflow. Additionally, the fan can support larger or more blades, which can increase airflow (although not linearly).

When it comes to ceiling fan blade shape, you need to take the Goldilocks approach. You want something that is wide enough to scoop large amounts of air at a time while not being so wide that the surface area creates excessive resistance to blade rotation.

Paddle-shaped blades that are wide at the outer end and narrow to the point of connection with the fan assembly are generally a good shape.

The wide outer portion is the portion that is best positioned to scoop up air. The narrowing towards the fan assembly, where less air can be scooped, helps to minimize the resistance of the blade.

In addition, rounded ends are more aerodynamic than squared-off or pointed ends.

3. Length of the Blades

When it comes to the blade length of ceiling fans, it’s the Goldilocks approach again. You will want to look for a middle ground between extremely long or short blades.

Between these two extremes, increasing the length typically increases airflow as long as the motor capacity increase as well to overcome the greater resistance.

At a fixed motor capacity, the shorter the blades, the more air is moved (within the range between the two extremes).

The blade pitch refers to the angle at which the ceiling fan’s blades are positioned. If the fan blades laid flat and weren’t angled, little airflow would be produced. This is because the blades need to be angled to be able to scoop the air and move it around the room.

Generally, the higher the angle or blade pitch, the better the airflow of the ceiling fan will be.

A pitch of 10-15 degrees will give you moderate airflow that fills most of the room. A higher pitch than this will cover less area but produce more airflow, and a lower pitch will do the opposite.

A ceiling fan’s speed is measured in RPM (rotations per minute). This measures the number of times the fan makes a full rotation in one minute. As the RPM increases, the amount of airflow will also increase.

The higher a fan’s speed, the more air it moves per minute. This is because each rotation it makes produces airflow, so the faster it rotates the more air it pushes out.

The airflow of a ceiling fan is largely related to where it is installed in relation to the ceiling, walls, and floor in a home.

A fan’s airflow will be restricted if it is too close to the ceiling or too close to the walls in a space. This is because the fan won’t have enough open space around it from which to pull air in order to generate airflow.

In addition, nearby surfaces will create turbulence in the airflow, which makes it much less efficient.

If the fan was too far away from the floor, you would need a more powerful fan in order for the room’s occupants to feel the effects of whatever airflow is generated.

If a ceiling fan is poorly installed, it can significantly decrease the fan’s airflow.

A wobbling fan indicates an imbalance in the fan’s structure, which happens due to improper installation. Wobbling fans produce turbulent airflow that loses too much of its energy to resistance, thus producing poor airflow.

Wiring is also handled during installation and can cause big problems with a fan’s airflow if done incorrectly. This is because proper wiring helps the motor to run at peak efficiency.

One of the most important forms of ceiling fan maintenance is routine cleaning, as it ensures the fan runs at peak performance. 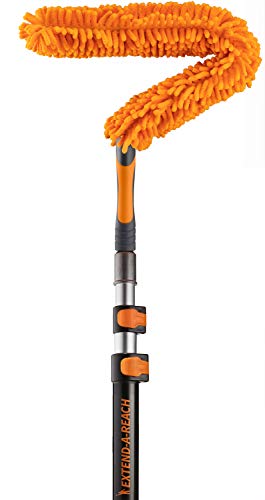 A buildup of dust causes airflow to decrease as it creates extra resistance on the blades as well as imbalanced blades.

Both of these things will require the motor to work harder and can cause it to wear down over time.

In addition, it’s important to regularly check the fan’s blades and structure. This is because if any of the blades or the fan’s structure itself is in an improper position, it can disturb and decrease the airflow.

If you’re wondering why I did not include blade number in the list, you can read Ceiling Fan: Are More Clades Better? (Cooler, More Efficient, Quieter).