While venting your bathroom fan through the roof is a good option and often the most common route taken, it would seem that this is not quite the case for a dryer.

While it is an option, i.e., there are no laws or regulations prohibiting this practice, there are several reasons why you might want to consider a different terminal vent position first.

Often Not the Shortest Route

The shortest route is always the best when venting any kind of ducted system in your home. Shorter routes mean fewer potential problems.

The shortest route for vents is more efficient than longer paths. A long venting system creates more space for the air to cover and more surface area, which leads to friction-related energy losses, and reduces the efficiency of the system.

Moreover, a ducting system that is unnecessarily long will also have more bends, curves, and angles. This also impacts how well air is able to move throughout the vent as energy is lost each time the air has to change direction.

Poor airflow in a dryer exhaust system can be dangerous. The hot air and lint are not vented efficiently, which creates a greater fire hazard.

It is more cost-effective to go with the shortest route because fewer materials are needed to complete the ductwork.

The roof is very rarely the shortest route for a vent from a dryer. This is because dryers are more often located on the ground floor or even in basements.

A dryer venting via the roof is more susceptible to rain and snow.

Dryer vents typically have covers to prevent the elements from entering the ductwork but such pieces aren’t completely reliable.

For example, covers that are hood-shaped (amazon link) will stop rain and snow from falling into the vent directly, but if there’s a buildup of snow or driving rain, it will not be 100% effective. 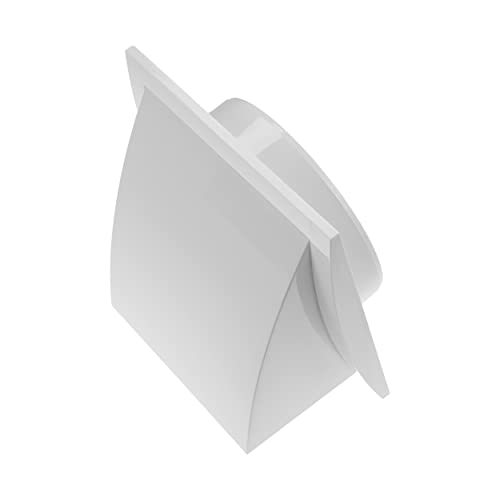 Rain or snow entering the vent can cause the dryer vent to leak as the water runs down, with the aid of gravity, to the dryer.

Leaks are slip hazards, can cause electrical issues, and can lead to mold growth within the ducts, on the wall by the vents, and in the dryer.

Venting a dryer through the roof can also create ice on the roof in areas where there is snowfall, and this can be problematic.

When the warm air from a dryer leaves the vent, any snow that has built up around the vent will melt and flow down the roof. As it goes, the external temperatures further from the dryer vent lead to the water solidifying into ice.

Having ice constantly sitting on the roof is not a good thing.

Ice that remains on a roof for a long period of time can cause leaks as the inner layer of ice closest to the roof can melt and water is trapped against the roof, held there by the top layer of the ice.

The longer water sits on one part of the roof, the more likely it is to leak through that spot.

Another leak risk with venting a dryer through a roof is the fact that you are cutting a hole into the roof for the dryer vent.

Anytime holes are being cut into a roof, the potential for a leak increases drastically, even with flashing and sealing.

Normally, when there is some equipment that requires a hole in the roof, a sealing adapter/tape/spray is used along with it.

This adapter goes around whatever is exiting through the roof and covers the gap between the roof and the equipment. This reduces the potential for leaks, but does not remove the possibility; it will never be as effective as complete, unbroken roofing materials.

Furthermore, these things can deteriorate after some time.

The repercussions of roof leaks have the potential to be quite serious. These leaks can lead to mold growth within the attic area and the weakening of wood beams.

These leaks can also make the attic area a more inviting space for insects and animals who are attracted by the shelter and water source.

Cleaning exhaust ducts and vents is important and it is even more so in the case of dryer vents.

Dryer vents are venting hot air. Hot air increases the potential for a fire if there is a buildup of debris near the vent. Think about dry leaves in the fall. These can readily catch alight.

Moreover, dryers vent their very own flammable debris in the form of lint. Yes, the dryers have lint traps, but they are not 100% effective.

It’s not just the vents either, you also have to clean the actual ducting and for some of this, the best way to do it is by accessing the ducts through the external vent.

Now, if this is all the way up on the roof, you are going to have some difficulty climbing up there and balancing on the roof, all while hauling and wielding your cleaning supplies and equipment.

The roof is one of the most accessible spots for animals and insects to enter the house. A dryer vent exiting the roof only increases the chances of these critters getting inside.

There are two reasons for this that piggyback off of one another.

First, a screen can’t be put on dryer vents. This is simply because the screen would trap lint from escaping the vent, which creates a serious fire hazard. So serious, in fact, that screens are prohibited by dryer building codes.

Without a screen on the vent, various animals and bugs are able to wander through the vent and into the ducts. They can do so much more easily with a roof vent than one that is on a side wall.

Backdraft dampers can stop them from going too far, but nests can still be made in the first few inches.

Those that do make it into the vents are unlikely to make it out and then you have to deal with rotting, smelly, and unhygienic corpses in your dryer vents!

Secondly, the dryer vent creates a warm and moist atmosphere. The hot air being released creates an area that bugs and animals find attractive.

The warmth that is generated also leads to some condensation forming. This warm and moist area is extremely attractive to creatures and undoubtedly they will seek this place out and make the most of it for themselves.