A colleague of mine was working out the math of having an expansion tank installed on his water heater. “A couple hundred bucks for the first install, and then I’ll probably have to shell out as much a couple years down the line,” he concluded.

This had me researching the whole topic of expansion tanks – Why are expansion tanks recommended for water heaters? What happens if you haven’t got one? Could you install it yourself? Are there any alternatives to an expansion tank?

It appears that, at least as far as code requirements go, you need to have some sort of a thermal expansion device installed.

For answers to these and more questions, plunge right in!

As you might remember from high school, water expands when heated. And, unlike air, water can’t be compressed, so the expanded water needs extra space. If your storage water heater is already full to capacity, the expanding hot water needs to find somewhere else to go.

Until recently, this wasn’t an issue… hot water simply expanded back from a household water heater into the municipal supply pipes.

Today, however, most towns and cities require that ‘check valves’ be installed to prevent back-flow that could potentially contaminate the town water supply. In some areas, civic authorities install a ‘pressure regulating valve’ at household inlets to regulate water pressure between 40 and 80 psi.

Whether you have a check valve or a pressure regulating valve installed on your water inlet, it effectively prevents back-flow. In other words, the water in your household plumbing forms a closed loop, and has no way back into the civic supply pipes.

As hot water expands, it exerts pressure on the water heater tank, and on your expensive pipes, bathroom fittings, and solenoid switches. (You can find these on your washing machine and dishwasher.) The resulting wear and tear can be quite costly, requiring these parts to be replaced in half their usual life-span.

Alright, so now you know that thermal expansion can’t be ignored. So, what’s the solution?

Well, traditionally, the expansion tank has been the answer to thermal expansion. This small, metal container resembling a propane tank is typically installed on the water heater’s cold water inlet. For most 30-, 40- or 50-gallon water heaters, a 2-gallon expansion tank is adequate, since water expands by approximately 4% when heated to boiling (212 °F), therefore, about 2% when heated from 59 °F through to 120 °F.

An expansion tank’s lower half is filled with air (typically at 12 psi pressure), while a rubber bladder installed partway through the tank allows water coming in through the top to push down on the air below (see image below). Hot water expanding from the water heater can thus safely occupy the top chamber of an expansion tank, until pressure is relieved by turning on a hot water faucet. 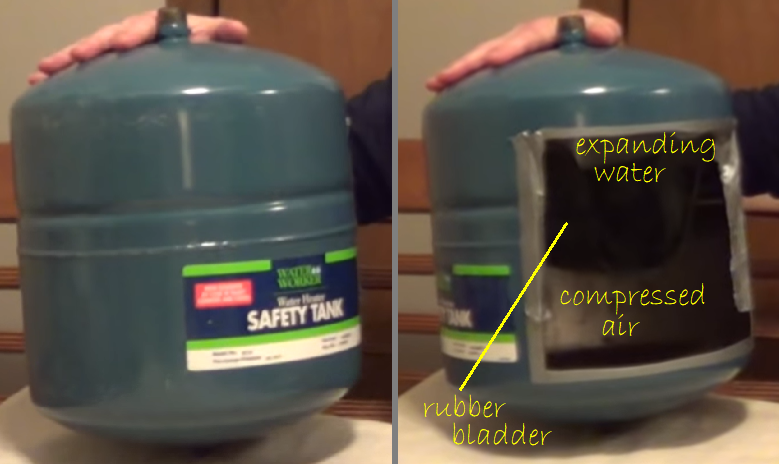 A Thermal Expansion Relief Valve is typically a combination ball valve with a low-pressure, spring-loaded safety valve. The safety valve opens (usually at pressures from 100 to 125 psi) to release hot water expanding out of a water heater, while the ball valve is a code-approved, manual shut-off.

TERVs for domestic plumbing are typically calibrated to eject water which has attained pressures between 100 and 125 psi. Note that this is much lower than the 150 psi setting at which a water heater’s PRV is calibrated to open up and let out excess pressure. Therefore, the TERV acts as the first level of safety, preventing pressure from building up beyond 125 psi.

When hot water expands from the water heater, the pressure in the pipe leading to the TERV builds up to the level that the valve is calibrated for, say, 100 psi. At this point, the spring-loaded valve is pushed open, ejecting the hot water into an outlet pipe that is typically a few feet long, leading to a drain where the water can safely flow out. 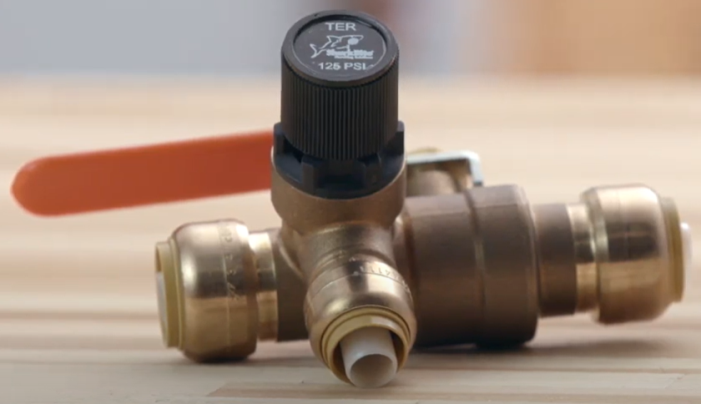 Pros and Cons of Expansion Tanks and TERVs

As you’ve already guessed, both expansion tanks and TERVs come with their own advantages and disadvantages. For starters, installing an expansion tank can cost more than twice as much as installing a TERV, and requires a fair amount of DIY skill or a professional plumber for proper installation.

In addition, it is difficult to identify a malfunctioning expansion tank. Malfunctions may occur due to a host of reasons, including:

Expansion tanks often develop leaks owing to rusted connectors or piping at the tank inlet. As a result, the tank may fail and need to be replaced within a few years, especially in areas with hard water.

Due to the hot water flowing into the expansion tank, significant amounts of condensation can form on its surface. In addition, the tank’s close proximity to the water heater can add to the problem, since the air surrounding the heater also tends to be excessively hot and humid, encouraging condensation to form. Over time, this leads to corrosion and rust formation, resulting in leaks.

Experts recommend that an expansion tank should always be installed vertically, with the water heater inlet at the top of the tank. In addition, to safeguard the installation against excessive vibration, for example, from the surging pressure of the hot water within the plumbing, it is recommended that the tank be secured to a wall with straps.

However, due to space constraints, for example, because the water heater is installed in a closet or crawl space, an expansion tank may be installed horizontally or upside down. This can cause a tank to malfunction, by forming a hydronic air-lock*, and even significantly shorten its life-span.

*Note: A hydronic air-lock within an expansion tank occurs when a pocket of air is trapped below the water, typically in cases where the tank has been installed upside down, such that incoming water enters the tank from the bottom instead of the top. This may cause the expansion tank to fail.

These are the most difficult to detect, but often cause the expansion tank to fail, since the bladder is unable to keep the water and air separate. In such cases, the tank has to be replaced.

Over time, the air pressure within the lower chamber of the expansion tank can fall well below the required level of 12 psi. This can be corrected by simply pumping in air using a bicycle pump (or simple air pump). In some cases, air pressure within the expansion tank might remain low because the installer forgot to pump in air during the installation!

However, the problem can be difficult to diagnose, requiring time and effort, and multiple rounds of testing.

By comparison, a TERV can be installed fairly quickly, and requires little to no maintenance. The design of a TERV is geared for industrial use, often in outdoor and remote locations where regular scrutiny is impossible. Therefore, these safety valves are usually rugged and capable of functioning under adverse conditions.

However, the TERV has one major drawback – it releases excess pressure by allowing expanding hot water to run off into a drain through the outlet pipe, thereby encouraging wastage of water. (Of course, in a house, it is possible to minimize this wastage by simply placing a pail or bucket below the outlet pipe, and utilizing the drip in the garden or for other utilities.)

The handy table below sums up the pros and cons of expansion tanks as well as TERVs. You can choose the device that better suits your home set-up, after running an eye over the summary:

There… you now have all the facts you need, and can decide for yourself whether you need a thermal expansion device installed in your home. What’s more, you can choose whichever one is better for your needs!

link to How to Organize Socks and Underwear Without a Dresser

There are myriad online video tutorials on how to fold your socks and underwear to fit precisely in your dresser. However, sometimes your budget or room size just does not allow for a dresser,...

Continue Reading
link to Can You Apply Drylok Over Old Drylok

Drylok is warrantied to last between 7-15 years. After this period, it might start to crack or peel off. The absence of this protective layer could encourage the growth of mildew, mold, and bacteria,...